MG Hector Bookings across 120 centers to begin on June 4 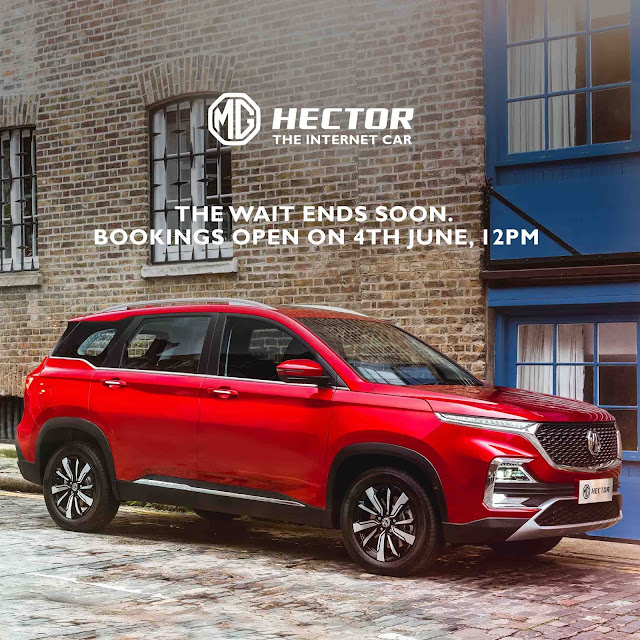 New Delhi: MG (Morris Garages) Motor India announced that bookings for its much-awaited first vehicle in India, the MG Hector, will begin on June 4, 2019. Being a future-forward organization, MG will begin ONLINE bookings at 12 noon on June 4 on its website,mgmotor.co.in, and will initially support it across 120 centers in India. The carmaker aims to expand this reach to a total of 250 centersby September this year. MG Motor will soon begin dispatches of the Hector from its Halol plant to its extensive network across 50 cities in India.
Speaking on the development, Rajeev Chaba, President and Managing Director, MG Motor India, said, “MG Hector has been developed with a high degree of localized content to cater to the specific needs of new-age Indian consumers. As India’s first internet car with 50+ connected features, the Hector will come with 19 exclusive product features, making it the new benchmark in its segment. Customers will be able to experience the Hector first-hand very soon and we are ready to welcome new customers into the world of MG.”
Heralding a new era for the much-revered octagonal badge in India, MG Hector comes with internet inside, thanks to the next-gen iSMART technology which promises safe, connected, and fun experiences. At 10.4 inches, it has the biggest HD touchscreen in its segment and also features MG’s signature design cues, including the famous star-rider grille. Its character lines are defined by geometric shapes, horizontal flow, and symmetry, while certain sections of its interiors are inspired by modern dance forms.
The Hector is also the first car with a sophisticated 48-volt mild-hybrid architecture in its segment, making MG Motor the first mainstream carmaker in India to bring 48V technology to the mass market segment. The latest environmentally-friendly engine technology uses a 48-volt lithium-ion battery to store energy and provide extra torque assistance of up to 20 Nm when required. The combination of three key functions – Engine Auto Start Stop, Regenerative Braking and E-Boost – ensures a great driving experience while reducing emissions by up to 12%.
Built to withstand extreme road conditions, the Hector has been tested for over one million kilometers in India before entering production and will be available in both petrol and diesel variants. The 1.5-litre turbocharged petrol engine delivers 143 PS power at a peak torque of 250 Nm and will be available in both manual and automatic transmissions. Its 2.0-litre turbocharged diesel engine will deliver 170 PS at a peak torque of 350 Nm.
The company has made an investment of INR 2,200 crore to refurbish the Halol manufacturing facility and rollout its first product, the Hector, from the facility. MG has installed an all-new assembly line, a press shop, a body shop, a parts distribution centre, a testing track and a new state-of-the-art training facility in the plant – all within a span of 18 months. The plant also has a captive vendor park to facilitate aggressive localization for all MG vehicles.

About MG Motor India: Founded in the UK in 1924, Morris Garages vehicles were world famous for their sports cars, roadsters, and cabriolet series. MG vehicles were much sought after by many celebrities, including the British Prime Ministers and even the British Royal Family, for their styling, elegance, and spirited performance. The MG Car Club, set up in 1930 at Abingdon in the UK, has more than a million loyal fans, making it by far one of the world’s largest clubs for a car brand. MG has evolved into a modern, futuristic and innovative brand over the last 95 years. With plans to soon introduce its brand of vehicles in the Indian market, MG Motor India has commenced its manufacturing operations at its car manufacturing plant at Halol in Gujarat. The first of these modern MG cars - “HECTOR” will be made available to the Indian customers in June 2019.