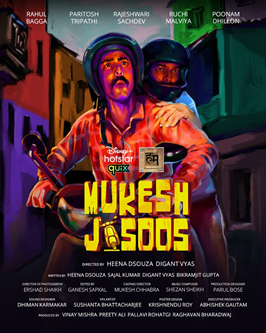 Mumbai, May, 2021: Humaramovies, in association with Disney + Hotstar announced the launch of an exciting comic-thriller series ‘Mukesh Jasoos’ on Disney + Hotstar app. This show is a part of the OTT platform’s ‘Quix’ series that includes small duration shows for big entertainment!

Mukesh Jasoos is written and directed by Heena D’Souza from Humaramovies Production team. The web series stars Rahul Bagga in the lead role and is supported by Paritosh Tripathi, Poonam Dhillon, Rajeshwari Sachdev, and Ruchi Malviya.

Speaking on the occasion of Mukesh Jasoos launch, Writer and Director of the show, Heena D’Souza said “What drew me to Mukesh Jasoos is its plot, the diversity of characters, and its relevance. The series dwells in a space, not much explored on the web, and thus is unique in its approach. I am thankful to my cast - a fine mix of age and experience for delivering such stupendous performances and making filming look so easy. Shooting amidst lockdown was a tricky experience, yet we overcame all challenges seamlessly. When the energy on set is good the work automatically becomes easy and enjoyable.”

Speaking about her association with Humaramovies, Heena added “I have been very lucky to be associated with Humaramovie, it’s a production house run by Vinay Mishra, Preeti Ali and Pallavi Rohatgi. They have been in the industry for the past 8 years mentoring fresh talent. Humaramovie is a curation platform open to all. They streamline ideas and projects and pitch them to bigger platforms like Disney + Hotstar. Mukesh Jasoos was one such project to get picked by Hotstar for its new vertical called Disney plus Hotstar Quix.”

1st episode of the web series has released today i.e. 7th May on Disney + Hotstar app. The next episodes will be screened in the following weeks.

Mukesh Jasoos Synopsis: Mukesh Jha is a fraud vakil. Mukesh Jha lives with his Mother-In-Law but his wife has left him for his cousin! Mukesh Jha can no longer be the vakil that he has been forever.. he now wants to become Mukesh Jasoos! After all “jasoosi aur vakaalat mein zyaada farak nahi hai”. Along with his able aide Muktaram he starts solving cases (petty in money big in EQ) but before he realizes he finds himself in the midst of a sinister plot where dead bodies start piling up! Abb Mukesh Jha banenge Mukesh Jasoos! Here is the link to the trailer of the show: https://youtu.be/YxKxPVWDnNo