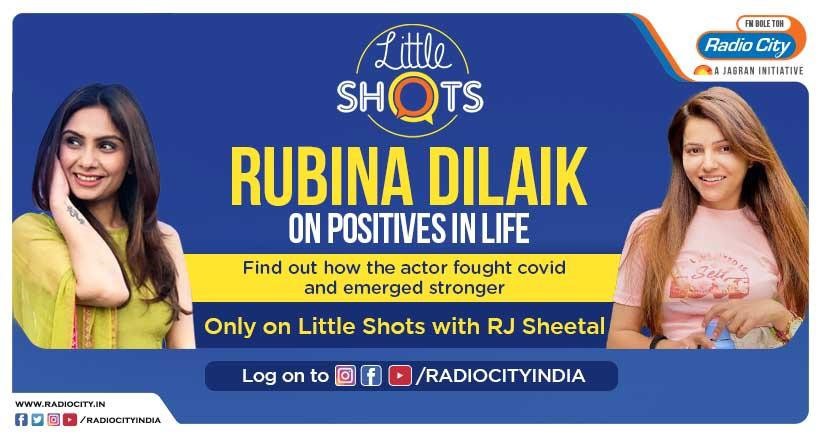 Through a series of inspirational Covid-19 recovery stories on the latest show ‘Little Shots’, Radio City urges people to stay positive and focus on the deeper aspects of life.

India, 2nd June 2021: Radio City, India’s leading radio network recently launched ‘Little Shots by RJ Sheetal’ with Telly sensation, Rubina Dilaik. The stories in the show are narrated by RJ Sheetal featuring short stories of people who have struggled, overcome, and recovered from Covid-19, with an aim to serve as an inspiration for people. Through the show, Radio City urges people to stay positive and happy as well as focus on the meaningful and deeper aspects of life.

Rubina Dilaik, a prominent household name who recently fell prey to the deadly virus shared her views on how she battled her way back to good health with sheer positivity by quarantining herself in her beautiful hometown, Shimla. She highlighted her belief that during these unprecedented times, only your family and their love can provide you with the necessary mental and emotional peace that can speed up one’s recovery. She also stressed on the importance of good food, ample sleep, short walks, pranayama as well as meditation for mindfulness which helps in recovery and in negating the long-term effects of Covid-19. She advised people to have a goal set which will motivate them to work towards recovery.

The show featuring RJ Sheetal and Rubina Dilaik aired on 29th May 2021 from 2 PM to 5 PM. On social media, Radio City is promoting the show Little Shots on its YouTube channel as well as through social media posts and stories on platforms like Facebook, Twitter & Instagram. RJ Sheetal has been in the Radio industry for over 12 years.

Mr. Kartik Kalla, Chief Creative Officer, Radio City said, “Our world now needs a massive dose of positivity, both in thoughts and actions to heal itself. Through Radio City’s show, ‘Little Shots, we aim to win hearts and lift spirits. We hope that these inspirational stories bring a lasting positive difference to people’s lives. We are happy to kickstart the show with Rubina Dilaik who is such a household name and emerged stronger after her battle with Covid. We are glad that through our medium, we are being able to positively influence our listeners.”

Click here to watch the interview with Rubina Dilaik - https://www.youtube.com/watch?v=9rkG96VI7MU

Music Broadcast Limited currently has 39 stations across 12 states, comprising 62% of the country’s FM population. Radio City reaches out to over 69 million listeners in 34 cities covered by AZ Research 2019 (Source: AZ Research Report). The network provides terrestrial programming along with 17 other web-stations, through its digital interface, www.radiocity.in.

Radio City has spearheaded the evolution of FM radio by offering content that is unique, path-breaking, and invokes city passion amongst listeners with its brand philosophy of “Rag Rag Mein Daude City”. The network introduced humor and the concept of agony aunt on the radio with Babber Sher and Love Guru, respectively. It also initiated Radio City Freedom Awards, a platform to recognize independent music, and provided a launchpad to budding singers with Radio City Super Singer, the first singing talent hunt on Radio.

Work Institute. Radio City has also been recognized in ‘India’s Best Workplaces for Women – 2019’ and has ranked amongst the Top 75 organizations on the list. In 2020, Radio City ranked 4th in ‘Best Large Workplaces in Asia’, according to the GPTW survey.