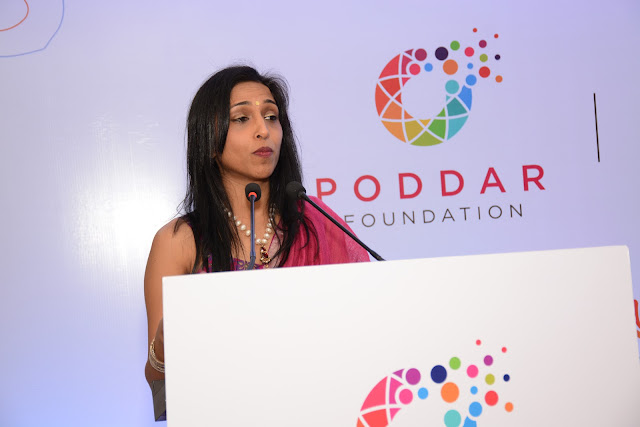 Bollywood Actor Rahul Bose, Dr. Kersi Chavda, Psychiatrist, PD Hinduja Hospital, Dr Prakriti Poddar, Expert in Mental Health, among others discuss importance of mental health challenges and way forward at a major conference organized by Poddar Foundation
Dr Prakriti Poddar states 150 Million Indians are suffering from mental health with little or no capability to access help
Mr Rahul Bose feels mental health insurance would benefit in breaking the stigma and helping people access care.
Nanik Rupani and Mr. Ronnie Screwvala believe that mental health is our greatest challenge in the 21st century, and they will support this initiative.
Mumbai: As 1 in 4 people in India deal with some form of mental illness during their life time, Maharashtra Home Minister Shri Anil Deshmukh who was supposed to attend the conference, could not come because of the cabinet meeting and other unavoidable circumstances. But he sent a message saying that various training and mental health programs should be conducted in jails for the wellbeing of the prisoners. The major conference titled ‘Silence Todo Insurance Jodo’ organized by Poddar Foundation, a leading organization working in this field along with other dignitaries including Mr. VK Gautam, Dr. Kersi Chavda, Mr. Rahul Bose, Dr. Prakriti Poddar, Shri Ronnie Screwvala.
The conference was an open forum to discuss the importance of insurance for Mental Health and to create a collective of stakeholders and advisors to aid the development of insurance policies. to
The NCP leader offered a political perspective to the significant issue and said focus should be given on mental health.
In a message, Shri Anil Deshmukh, Home Minister, Maharashtra said, “I am extremely happy that Prakriti Poddar is working on this mission. Mental health is so important. And as the Home Minister, Maharashtra, I will try to introduce her recommendations in jails and prison for the welfare of the prisoners. All the best to the Poddar Foundation,”.
As a country, it is unfortunate that we have mainly focused on Life Insurance, failing to understand the importance of health coverage, especially that of mental health. Research suggests that 86 percent of the rural population and 82 percent of the urban populace are not covered by health insurance in India. Notably, most health insurers up till now did not even cover mental illnesses in their health plans. However, with the MHCA, the IRDAI has issued a mandate asking insurance providers to include mental illness in their bouquet of services.
Mental health experts say rising life expectancy and changing lifestyles have in recent years led to increasing incidences of depression, anxiety disorders and dementia among others. Unfortunately, this aggravating problem receives little attention, particularly due to low income levels besides other social challenges.
Bollywood actor Mr Rahul Bose, who is also the founder of an NGO the Foundation, said even stress and anxiety requires therapy, which unfortunately cannot be afforded by a lot of the suffering population.
“We do not wish to lose more people to such ailments and therefore, if mental health insurance comes out it would benefit the lives of many,” added Bose.
“As psychiatrists, we recognize that we cannot help a vast amount of people whom we want to provide assistance to as they cannot afford these treatment expenses. Treatment for mental health ailments is not often affordable or cheap, and therefore, it is so important for us to be a part of this initiative and to thoroughly define what mental disorders are. This is important to deter defrauding and discourage people from using these facilities for spas and massages,” said Dr. Kersi Chavda, Psychiatrist, PD Hinduja National Hospital.