Swwapnil Joshi shares some interesting anecdotes related to his digital debut, ‘Samantar’, the sequel and the pressure of changing perceptions with RJ sho sho Shonali

Swwapnil Joshi opened up the transition in his career as he decided to choose the dark and compelling Samantar for his web debut, the pressure of breaking away from his usual romantic roles, completing the shoot of the sequel during a pandemic as well as the pressure of essaying the challenging role of Kumar Mahajan for the second season. In his heartwarming style, he conveyed his gratitude to the show which has changed the audience’s perception and opened new avenues for him.

Sharing his thoughts, Mr. Kartik Kalla, Chief Creative Officer, with the rise of web content and extensive dubbing, Marathi cinema is now transcending linguistic barriers and getting a wider acceptance among non-Marathi speaking audience. Established artists from the Marathi film industry, known for their exceptional performance have made Radio City’s Star Katta a household name in Pune over the past decade. We are happy to witness that our differentiated, hyper-localized and credible content has helped us carve a strong foothold in Maharashtra, resonating with diverse set of audience. 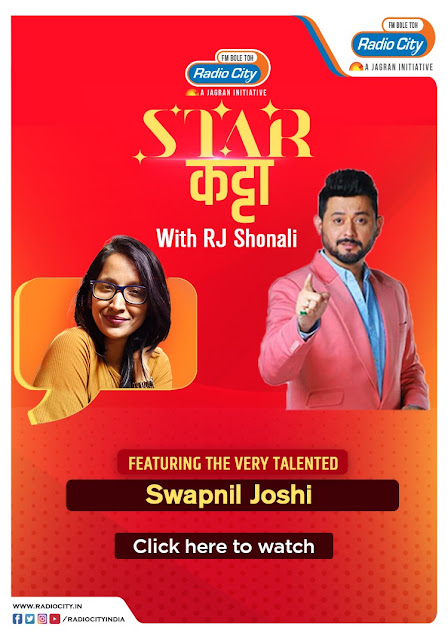 The segment Star Katta featuring RJ Shonali airs every Monday to Friday from 8 PM to 9 PM. On social media, Radio City is promoting the segment on its YouTube channel as well as through social media posts and stories on platforms like Facebook, Twitter & Instagram.

Watch the interview of Swwapnil Joshi and subscribe to Radio City Star Katta for exclusive content and interviews of your favourite artists.

Music Broadcast Limited currently has 39 stations across 12 states, comprising 62% of the country’s FM population. Radio City reaches out to over 69 million listeners in 34 cities covered by AZ Research 2019 (Source: AZ Research Report). The network provides terrestrial programming along with 17 other web-stations, through its digital interface, www.radiocity.in.

Radio City has spearheaded the evolution of FM radio by offering content that is unique, path-breaking, and invokes city passion amongst listeners with its brand philosophy of “Rag Rag Mein Daude City”. The network introduced humor and the concept of agony aunt on the radio with Babber Sher and Love Guru, respectively. It also initiated Radio City Freedom Awards, a platform to recognize independent music, and provided a launchpad to budding singers with Radio City Super Singer, the first singing talent hunt on Radio.

Work Institute. Radio City has also been recognized in ‘India’s Best Workplaces for Women – 2019’ and has ranked amongst the Top 75 organizations on the list. In 2020, Radio City ranked 4th in ‘Best Large Workplaces in Asia’, according to the GPTW survey.