- August 30, 2019
by Shrutee K/DNS
Mumbai: Vigo Video, a popular short-video platform, today announced the launch of India’s first-ever vertical web series titled Pyar Tera Superstar. Based on the millennial love relationship of Divyanka Sirohi, a Vigo Creator, the web series revolves around her digital romance, which eventually blossomed into a real-life love story.
Catch the glimpse of the web series: https://youtu.be/mZAZ3rXCRpM
The web series, which is shot in a vertical format to resonate better with smartphone users, will be released on Vigo Video on September 3, 2019. The weekly episode will be released every Friday.
The series is in line with Vigo Video’s ongoing mission to showcase “real people and their real stories”, promoting Indian talent and showcase their inspirational journeys.
It traces Divyanka's journey from an ordinary girl to that of a digital superstar because of her versatile talent and creative videos on Vigo. Divyanka, who resides in Delhi, started her journey on the Vigo Video app as a fashion and beauty creator. 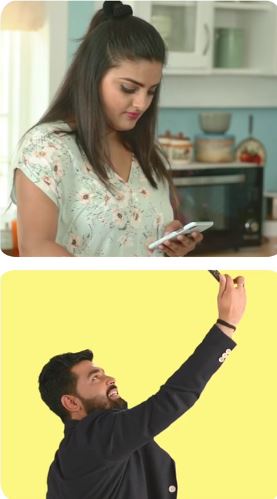 The series is directed by Gaurav Lulla, the co-founder of Loose Cannons and the music is composed by the famous music director, Dhirendra Mulkalwar, who has scored music for several Bollywood movies including Uri-The Surgical Strike, Article 15 and Toilet Ek Prem Katha among others.
Speaking on the launch of the web series, the Protagonist of the web-series and Vigo creator,  Divyanka Sirohi said, “I am overwhelmed to have received this wonderful opportunity by Vigo Video. The platform has not only given me the chance to showcase my creativity, but also to connect with my fans on a larger scale through this web series. I am super excited for this show and hope my followers appreciate our efforts in bringing this  show to life.”

Gaurav Lulla, Co-Founder, Loose Cannons, who has also directed this series said, “New age storytelling is evolving every day. This series has been created keeping in mind that a majority of audiences use their smartphones to consume content.  It is a first-of-its-kind narrative fiction storytelling in the vertical format. We are very excited to share this with everyone and excited to partner with Vigo Video to create a great story with this format.”
Dhirendra Mulkalwar, Music Director of the web series said, “Whenever I compose music, I try to draw inspiration from events happening around me. For the music for the Vigo web series, I didn’t have to look anywhere else, because it’s so relatable to my own story. This track expresses my own emotions and I’m very excited to be a part of this project and looking forward to watching the series.”
Vigo Video is an engaging platform for the next generation of storytellers and connects with like-minded users sharing similar interests. Catch the series Pyar Tera Superstar on Vigo Video.  The web series will also be available onSony Liv app soon.
Link of the creator, Divyanka: http://www.vigovideo.net/share/user/6507084174841724930/?timestamp=1555670492
About Vigo Video : Vigo Video is India's fastest-growing short-video platform, connecting real people with real stories from their community. Vigo Video brings Indians together through entertaining and heartfelt visual stories, brought to life through professional editing tools, creative stickers, awesome filters and special effects. With its India headquarters based in Mumbai, Vigo Video is available on iOS and Google Play Store.https://vigovideo.in/vigo-video-app-download/