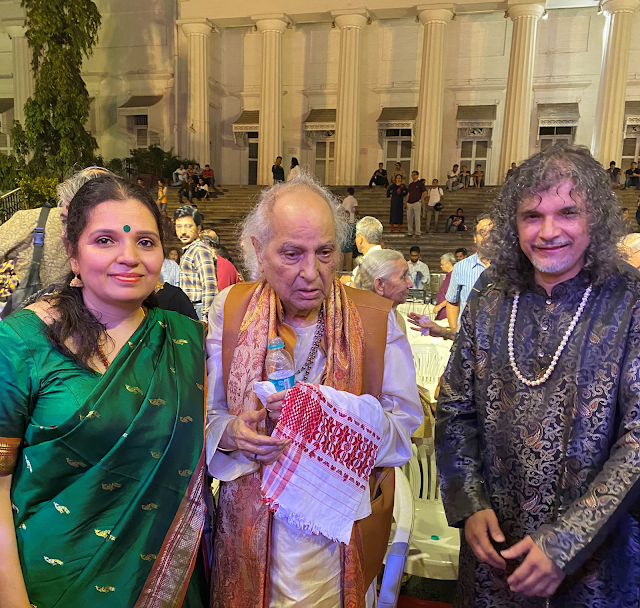 by Shrutee K/DNS
To remind us of the importance of monumental structures holding a piece of our history, the Indian Heritage Society (IHS) in its 28th year hosted a music festival, Mumbai Sanskriti on January 11 and 12, 2020. Performing at the event was Maestro Kala Ramnath who is synonymous with the 'Singing Violin'. She was accompanied by Pt. Ramdas Palsule on Tabla.
Speaking at the festival, Ms. Ramnath said, “It is a great honour for me to perform at this unique festival which blends heritage and culture and pays tribute to this wonderful city Mumbai which was built 2000 years ago. I really hope the audience enjoyed my music as much as I loved preforming tonight at gorgeous Asiatic Society Library.
Present at the performance was Pandit Jasraj , Ms. Ramnath’s guru who shared, “Bahut anandit hua. Yes learning from a Guru is important but the student also needs to put in a lot of hard work. I have seen Kala being completely immersed in her music and it was a moment of pride for me to see her soulful performance today.”
Recently  acclaimed percussionist Bickram Ghosh collaborated with Kala Ramnath for his latest album 'Paper Boats which features some of the most accomplished artistes from across the globe, from Greg Ellis to George Brooks. Ghosh has scored the music for the 7-track album; Paper Boats was released recently worldwide.
Ms Ramnath has performed at Sydney Opera House, Queen Elizabeth Hall London, Carnegie Hall, New York, Palais De Bozar, Brussels, Theatre De Laa Ville, Paris, North Sea Festival, Cape Town, Port Fairy Folk Festival, Australia, Tropen Museum – Amsterdam,  to name a few.
About Kala Ramnath: Kala Ramnath is an Indian classical violinist. She belongs to the Mewati gharana.[1] She was awarded the Sangeet Natak Academy Puraskaar in 2016, Rashtriya Kumar Gandharva Sanman in 2008 and the Pandit Jasraj Gaurav Puraskar in 1999. Composition of Kala Ramnath featured in the Grammy Award-winning album "In 27 Pieces" She is a featured artist in the Grammy nominated album ‘Miles from India’ . Kala is Recognized as one of the fifty best instrumentalists of the world by the prestigious ‘Songlines’ Magazine. Kala is the first Indian violinist to be featured in the violin Bible, ‘The Strad’.