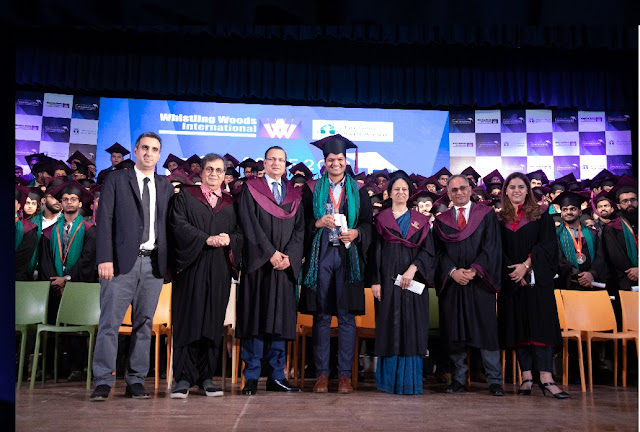 300 students from Whistling Woods International graduated, determined to make a difference in the film, communication and creative arts domain. Industry veterans Mr. Salim Khan and Ms. Asha Parekh were honoured with the WWI Maestro Award, while Mr. Rajat Sharma delivered the keynote speech
Mumbai: The industry has always revered Whistling Woods International (WWI) as the provider of world-class education, perfectly balancing theory with practice. As Asia’s premier Film, Communication & Creative Arts institute celebrated its 12th Convocation, 300 brilliant minds joined the ranks of India’s media and entertainment industry. Over the course of an emotional event, the graduating students were felicitated for their accomplishments by the distinguished guests and the faculty of WWI, including Mr. Subhash Ghai, Founder and Chairman, and Ms. Meghna Ghai Puri, President.
The ceremony was made memorable by the presence of the chief guests – legendary screenwriter and producer, Mr. Salim Khan, and distinguished actor, director, and producer, Ms. Asha Parekh. These legends of the Indian cinema congratulated the thrilled graduates and were in turn presented with the prestigious WWI Maestro Award for their lifelong contributions to the advancement of Indian cinema. Mr. Rajat Sharma, Chairman and Editor-in-Chief, India TV, also the keynote speaker for the ceremony and Professor Shalini Bharat, Director of the Tata Institute of Social Sciences (TISS) were present at the occasion to felicitate the students.
The event began with the lamp lighting ceremony, which saw the participation of Mr. Subhash Ghai, Ms. Meghna Ghai Puri, Dean – Mr. Ravi Gupta, the guests of honour, and the event’s keynote speaker. 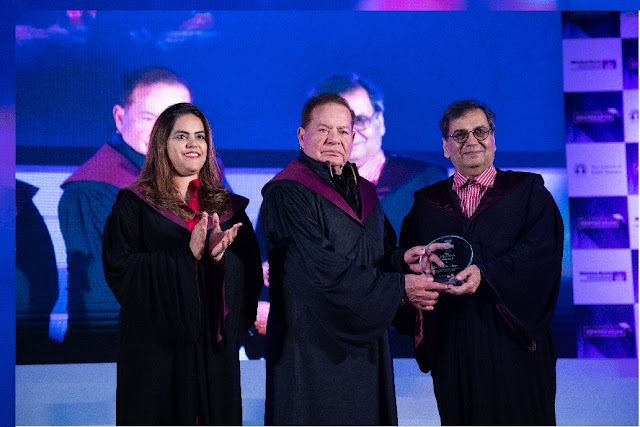 Commenting on the occasion, Mr. Subhash Ghai stated, “Whistling Woods International has always stood as a symbol of what can be achieved through hard work and commitment. By obtaining a degree, you learn only a particular skill. It is up to you, how you put the skills in practice. Your use of wisdom, talent, skill, understanding of the subject will be put to test from now on.” He further added, “As I look at today’s graduates, I know that they have all embodied this spirit to the fullest. As you start your professional career, know that you have the full support of your family at WWI.”
As Mr. Salim Khan was presented with the Maestro Award, he took the opportunity to share his personal life experiences to an overwhelming response from the audience.  In addition, Maestro Awardee, Ms. Asha Parekh expressed her happiness and gratitude towards the presenters and advised the students that, “Graduation is just a stepping stone. From now on you have to be prepared to work hard. There will be highs and lows in life. You must be stern in your resolve to achieve what you have come to achieve.”
Professor Shalini Bharat, Director, TISS, also addressed the students and wished them the best for all their future endeavours. Following this, Mr. Rajat Sharma, the Chairman and Editor-in-Chief of India TV, presented the event’s keynote speech, in which he highlighted, “Completing graduation does not mean you should stop learning. It should continue, no matter whichever field interests you. Being vigilant and keeping a close tab on the happenings around you will aid your learning process.” In addition, he advised the students, “You must first be a person who is good at heart. Irrespective of the success you achieve, stay rooted and humble.”

As the event entered its concluding phase, Mr. Rajat Sharma, Mr. Subhash Ghai, Mr. Ravi Gupta, and Prof. Shalini Bharat, distributed the graduation certificates to the students of all the degree and diploma programmes. Upon completion of this, Mr. Rahul Puri, Head of Academics at WWI and  Ms. Meghna Ghai Puri, oversaw the presentation of commendations to star performers across the institute’s schools and announced the valedictorian of the graduating class.
With the occasion coming to an end, Ms. Meghna Ghai Puri took to the stage to deliver the closing address, “As I stand here before your eager faces, I’m filled with pride at all you’ve accomplished. You should be as well. And though you may be tempted to relax, now is the time to work harder than you ever have before. You’ve taken the first step, but there are many more to come. And though the road may be long and difficult, never doubt yourself.” As a final word of advice, she quoted Joshua J. Marine and said, “Challenges are what makes life interesting. Overcoming them is what makes life meaningful.”
On that note, the event came to an end. Cheers resounded across the auditorium, and as a sea of smiling faces flung their caps into the air, the new graduates were greeted with a thunderous standing ovation from family and friends in attendance. Truly a day to cherish.
About Whistling Woods International: Whistling Woods International (WWI) is Asia’s premier Film, Communication, and Creative Arts Institute. Founded by one of India’s leading filmmakers – Subhash Ghai, WWI is one of the largest and best media institutes in the country. ‘The Hollywood Reporter’ has rated Whistling Woods International as one of the Ten Best Film Schools in the world in 2014, 2013 & 2010. WWI offers courses that vary in duration from 1 year to 4 years catering to all major verticals of the Media & Entertainment industry, namely Acting, Animation, Cinematography, Direction, Editing, Game Design, Music, Producing, Production Design, Screenwriting, Sound, Visual Effects, Media Management.