Little Masters Challenge: Bringing out the sporting best in adolescents 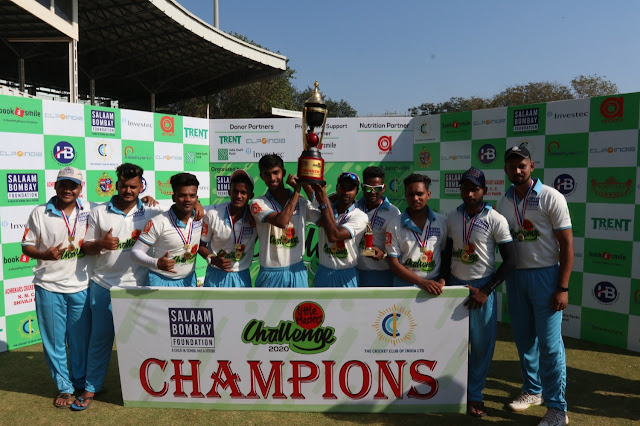 Mumbai’s largest inter-school cricket tournament that has been creating a level-playing field for youngsters in the city, concludes
Mumbai: 2019  the year gone by marked 30 years since the adoption of the most widely ratified human rights treaty in history. The Convention on the Rights of the Child, which was adopted by the UN General Assembly in November 1989, had particularly stated that every child has a right to leisure and play among other things.
Three decades later, organisations across the country are consistently putting their best foot forward through events and activities to leverage the power of sport as an important tool for the overall development of young adolescents. One such activity is the Little Masters Challenge (LMC) organised by Mumbai-based NGO Salaam Bombay Foundation. LMC is Mumbai's largest cricket tournament for students of government as well as private schools. LMC is into its 16th year and has been relentlessly spearheading efforts to encourage both sportsmanship and competitive sport among youngsters.
This year, the grand finale of the annual sporting event was held at the Brabourne Stadium on Friday amidst loud cheers from as many as 2,500 children from 42 private and public schools. This is, perhaps, what has set LMC apart from all other sporting events in the city. In the decade and half of its existence, the event has managed to bring together children and adolescents from government as well as private schools on a common platform, reiterating the power of sport as one of the greatest levellers.
A total of 75 teams and 1,050 adolescents met each other in league format matches this year. At Friday’s riveting final matches, the audience witnessed some exhilarating moments as Shardashram Vidya Mandir International School and Salaam Bombay Sports Academy locked horns in an epic battle in the Under 17 girls category. In the Under 17 boys category, IES Vashi clashed with the Salaam Bombay Sports Academy. Another highlight of the finale was a 10-over face–off between Teamglobal and the alumni of the Salaam Bombay Cricket Academy alumni. Teamglobal, an integrated Logistics services provider company, are the winners of Salaam Bombay Foundation’s Corporate Change Maker Tournament held in the month of December.
Under 17 Girls Category –
·         Winners - Shardashram Vidya Mandir International School; Runners up - Salaam Bombay Sports Academy
·         Woman of the match -Diksha Manjarekar - Shardashram Vidya Mandir International School
·         Woman of the series - Shradha Shetty - Shardashram Vidya Mandir International School
Under 17 Boys Category -
·         Winners - IES School Vashi; Runners Up - Salaam Bombay Sports Academy
·         Man of the match - Ruturaj Kadam - IES School Vashi
·         Man of the Series - Hrushikesh Chavan - IES School Vashi
Corporate Change Maker Category -
·         Winners - Salaam Bombay Foundation Alumni team; Runners up – Teamglobal
·         Man of the match -  Upendra Yadav (Salaam Bombay Foundation Alumni team)
Alongside Teamglobal were nine other corporate companies, including Tata Trent, CLP India, Investec, Teamglobal, Tata Realty, ELP, Indostar, Kaya, Monk Media and NSFO, who cheered with all their might for the adolescents and their colleagues from the business world. All these teams had participated in the Corporate Change Maker Tournament, the finals of which was held on Friday. Immense corporate support also proved to be another strong point for this year’s LMC. At LMC 2019, only three corporate teams were present to express their support to the young champs. This year, 10 companies went beyond their CSR programmes to support, invest and encourage sports in order to create a significant societal impact.
Events like LMC are contributing majorly to comprehensive grassroots sports development, especially at a time when the contribution of sports to India’s GDP is at a mere 0.2% compared to 2.6% for the US, 0.9% for Australia and 0.7% for the UK. Not just that, LMC is also creating role models among young adolescents increasing the value of sportsmanship. Till date, LMC has impacted more than 9,000 adolescents and changed their lives for the better – testimony of how sport can prove to be a game changer for young children.
Speaking about the event, Gaurav Arora, VP-Sports, Salaam Bombay Foundation said, “LMC has been leveraging sports as a medium of change among young adolescents from government as well as private schools. This tournament has taught them so many life skills -- from leadership to discipline to teamwork. It has also provided them with the right kind of exposure if they wish to pursue careers in sports. Enrichment of the physical, emotional, and social development of adolescents is the most important contribution of LMC.”
About Salaam Bombay Foundation:  Salaam Bombay Foundation started in 2002 to work with 12 to 17 year old adolescent children growing up in Mumbai’s slums. These children live in extreme poverty and in “at risk” environments. The municipal schools they go to do not have the resources to give them individual attention, career guidance or access to activities that stimulate the mind. Many are undernourished and face the risk of substance abuse. They come from financially challenged homes and are pressured to drop out of secondary school and seek jobs to support their families.  Given these ground realities, Salaam Bombay Foundation has harnessed the ability of child-friendly, innovative education tools to develop life skills and coping skills necessary to ensure that these adolescents develop into well rounded personalities, able to meet the challenges they face and take on leadership roles within their communities.
The Foundation keeps children in school by empowering them to make the right choices about their health, education and livelihood thereby ensuring that they can thrive with a bright future. In-school leadership and advocacy programmes equip "at-risk" adolescents with the life skills they need to lead change. The Sports, Arts and Media academies encourage them to express themselves and provide performance opportunities that build self-esteem. The skills@school programme   broadens their career horizons and empowers them with vocational skills for sustainable careers. Thus Salaam Bombay initiatives increase confidence, give vulnerable adolescents the means to earn part-time and stay in school, and provide the tools to explore their full potential.  www.salaambombay.org