Mumbai, India: The curtains came down on the 6th International Young Chef Olympiad, at a dazzling closing ceremony held at the Nico Park’s, Wet-o-Wild, Kolkata. After a nail-biting contest of 6 days across five Indian cities – Delhi, Pune, Bangalore, Goa and Kolkata, Malaysia’s Chen KhaiLoong was crowned the winner of YCO 2020.  The Silver medal winner was Austin CaleLabago of Philippines while the Bronze winner was England’s Bethany Collings. The trophies were given away at the glittering prize distribution ceremony by Dr Suborno Bose, Chairman, YCO Global Council, Professor David Foskett, Chairman of the International Hospitality Council and Padma Shri Chef SanjeevKapoor, the Principal Judge and Chief Mentor of YCO, Chef Brian Turner, the President of the Royal Academy of Culinary Arts, in the presence of the 18 esteemed judges.


The winners lifted their trophies amidst cheering, fanfare and some beautiful fireworks display, as the world watched the entire event broadcast live through IIHM's social media network. A special attraction for the gold winner this year was the Gold Toque. At the historic moment, Malaysia’s Chen Khai lifted the trophy and donned the gold crown as he bagged the prize cheque of $10,000 USD. 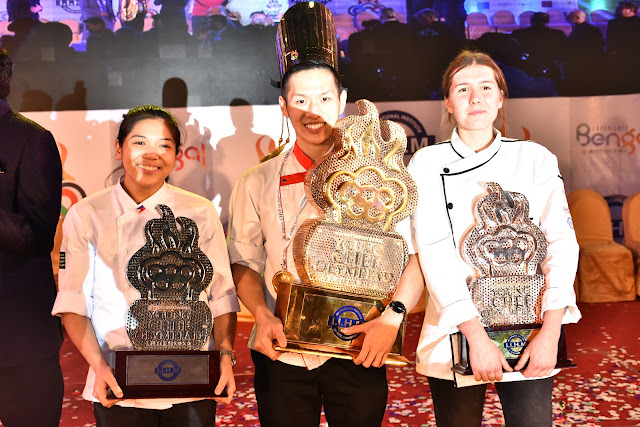 Organised by the International Hospitality Council (IHC) in association with the International Institute of Hotel Management (IIHM), YCO 2020 was yet another grand successful edition of the world’s biggest culinary competition with participants from 50+ countries fighting tooth and nail to win the coveted title. This united platform of young chefs was the perfect example of bonding, friendship and learning together. “More than a competition, YCO is now a global youth platform and launchpad for the culinary superstars of tomorrow,” said Dr Suborno Bose. In times when the world is rent by political and social issues, the International Young Chef Olympiad is seen as a unified platform of young chefs from around the world, bringing friendship and camaraderie to this competition.

Apart from the three winners, YCO 2020 had a long list of special category winners. The Plate Trophy round held between the participants ranked 11 to 20 in the competition, went to Dominic Muollo of New Zealand this year. The Best Dessert Dish in Round 1 went to Leuan Jones from Wales while the Late Shakuntala Devi Gupta Award for Best Vegetarian Dish Creation in Round 2 went to EunjeongJeong of South Korea.

Four Mentor Nominee Awards were given away at the YCO 2020 as well. The winners were judged based on each of the mentor’s recommendations written about their respective participants. The awardees were Erik Shahbazyan of Armenia, Kethusegile of Botswana, EgonEuan Le Roux of South Africa and ObidiegwuAnuli of Nigeria. The IHC Best Young Chef Ambassador Awards was another category where participants had to write about themselves, their ambitions about becoming a chef and how they wish to further develop themselves. The four awards in this section went to GiorgiaCeccato of Italy, Samuel Farley of USA, MdMiraj  Mia of Bangladesh and Fatima Gomez of Mexico. Based on the hygiene and cleanliness maintained during competition, the participants were marked in the first two rounds. A winner was selected from each city round. EunjeoungJeoung from South Korea won the Best Hygienic Practice for the Delhi round, Micaela Da Costa from Portugal won for the Pune round, SaviRajbahak from Nepal won the Goa round and MihailVelkov from Switzerland won in the Bangalore round. The Rising Star awards for each city were Claudia CebriaRos from Spain for Delhi round, Jonathan Larmie from Ghana for the Pune round, SaviRajbahak from Nepal for the Goa round and Tarran O-Reilly from Ireland for the Bangalore round. The Kitchen Cut Award is for best recipe, nutritional analysis and costing presentation, where the entries are judged by Chef John Wood, the founder of Kitchen Cut. The award went to New Zealand. 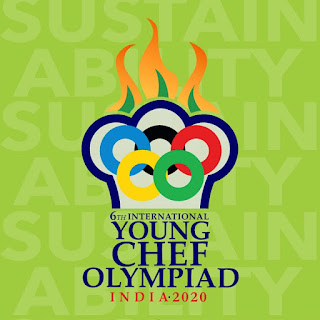 YCO 2020 had the theme of Sustainability, embracing the United Nations 17 Sustainable Development Goals. In keeping with this theme, a special presentation had to be given by the participating countries about Sustainability measures in their own country. Out of the 10 countries who made presentations at the David Foskett Auditorium on IIHM Global Campus, Bhutan’s SonamSubba was the winner. He was awarded the Green Toque of Sustainability. YCO 2020 had a brilliant panel of esteemed judges from around the world led by Prof David Foskett, Chairman of the Jury, renowned chefs like Chef Brian Turner, celebrity TV chef and President of the Royal Academy of Culinary Arts, was chief judge of the competition. Chef Andreas Muller, Programme Director (International Cuisine) at VTC, Hong Kong, was Deputy Chief Judge, Michelin-starred chefs Chris Galvin and John Wood, the Founder and Director of Kitchen Cut were senior judges of the competition among several other iconic culinary professionals from around the world. YCO 2020 felicitated some of these special judges for their outstanding work in the field of culinary arts. The Outstanding Contribution to International Culinary Arts Award went to Chef Brian Turner. Outstanding Contribution to Industry went to Chef Andrew Bennett, Chef Apprenticeship Award went to Chef Stuart Littlejohn, Outstanding Contribution to Culinary Arts was for Chef Henri Brosi, the Award for Dedication to Training and Competition Work went to Chef Stephen Hogan while Outstanding Contribution to Culinary Education went to Chef Andreas Muller.

Beside the competition, the participants from 50 countries along with their mentors and the judges took part in various Food Aid activities, supporting IIHM’s initiative to aid the UN’s Sustainable Goal Number 2 of Zero Hunger. They visited shelters and homes in the Indian cities where they met the boarders and distributed food among them. In Delhi, the young chefs visited SPYM Juvenile De-addiction Centre, in Bangalore the mentors and participants visited SumangaliSevashram while the judges went to Cheshire Homes. In Kolkata, the judges visited the renowned and respected Missionaries of Charity to pay homage to Mother Teresa and see the huge social work that happens through this organisation.