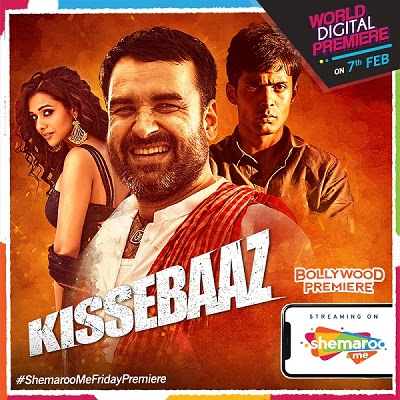 Kissebaaz to be available to audiences across 150 countries through ShemarooMe
Mumbai: ShemarooMe’s Bollywood Premiere to showcase the World Digital Premiere of the murder mystery thriller Kissebaaz featuring the versatile actor Pankaj Tripathi. The movie will reach the global audiences through the platform’s one of a kind offering – “Bollywood Premiere”. The ever dependable and versatile actor Pankaj Tripathi seamlessly essays the role as a henchman of politicians in the political thriller Kissebaaz. The movie also stars other stellar actors such as Rajesh Sharma, Evelyn Sharma, Rahul Bagga, Anupriya Goenka, Mouli Ganguly and Zakir Hussain in key roles. Set in Uttar Pradesh in the narrow confines of the city of Benaras, Kissebaaz is directed by Annant Jaaitpaal and produced by Sanjay Anand and Divya Anand.
This unique offering by ShemarooMe, is specially curated for the movie buffs and Bollywood fans worldwide. To satiate the Bollywood cravings of fans, ShemarooMe premieres entertaining and critically acclaimed movies every Friday. The recent line-up of ShemarooMe includes some exceptional movies like Ekkis Tarrekh, Paharganj, SP Chauhan, Gone Kesh, Marudhar express, Marrne Bhi Do Yaaron and now Kissebaaz. Taking the legacy of the parent company forward, ShemarooMe understands the pulse of the audiences and has been at the forefront to entertain the viewers throughout. Bollywood Premiere has successfully engaged with the audiences and now is entertaining them at the comfort of their homes, through various platforms and hand-held devices. ShemarooMe showcases World Television Premiere of a new movie every Friday living up to the promise of delivering masala entertainment to the Asli fans of Bollywood.
ShemarooMe’s Bollywood Premiere showcases critically acclaimed Bollywood movies every Friday, that have a strong story line and great entertainment value that the audiences have missed out on watching during their theatrical release. With an impressive IMBD rating of over 7.5, Kissebaaz is a political drama with a lot of twists and plots and will keep the viewers engaged throughout. The movie revolves around Rahul Bagga’s character Harsh, a small-town Romeo who gets involved in difficult situations. His love interest is played by Anupriya Goenka who portrays the role of Naina. The main character, Chutaan Shukla who is played by Pankaj Tripathi keeps the audience guessing for more throughout the movie. Rajesh Sharma and Zakir Hussain have played strong characters and performances as the supporting cast in the movie.
Watch  the full movie  here: https://www.shemaroome.com/movies/kissebaaz