The book was launched by superstar John Abraham, who took a day off from shooting his upcoming film Pagalpanti.  Abraham and the author have much in common. They are both motorcycle enthusiasts and have roots in Kerala.  Abraham recounted his days as a child making a two-and-a-half day, one way train journey to his hometown in Kerala with his family. 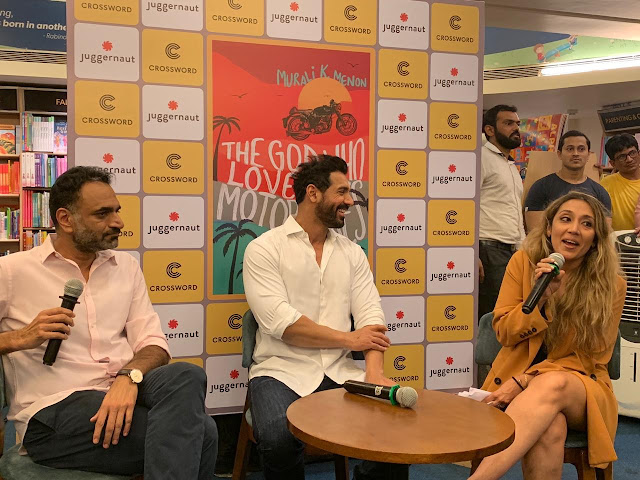 When moderator Namrata Zakaria asked him why Kerala hasn’t yet been Modi-fied, Abraham said, “You can see a temple, a mosque and a church within 10 meters of each other in Kerala, peacefully coexisting without any problems whatsoever. Seeing what’s happening in the world today, where the entire world is getting polarised, Kerala is an example where religions and communities can peacefully coexist. Even when Fidel Castro passed away, they had his posters everywhere!” 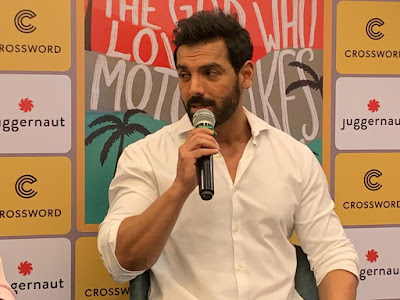 Abraham recounted his first love, his first bike, the Yamaha RD350 and how it broke his heart to sell it even for a profit. Abraham owns multiple, very expensive bikes today and said he rides them only at night and on Sundays spends more time cleaning them than riding them.

Menon’s book is part road trip and part magic realism. It’s about a local deity, KK Swamy, who takes off on a journey in search of the British classic motorcycle, the elusive Velocette Venom Thruxton HT. The mercurial motorcycle is said to have been tamed by Chowfin Singh, a large half-Sikh, half Chinese rider with nine holes ringing his belly button. The book is also about “passion, obsession and chasing one’s dreams,” said Menon.