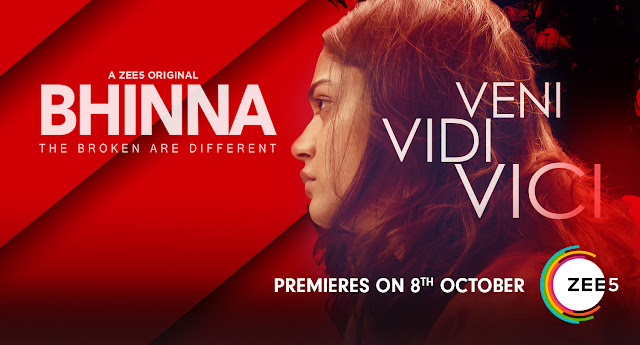 National: ZEE5, India’s fastest growing ConTech brand, has consistently launched Originals and Exclusive films and web series across languages and genres. Bhinna is the latest addition to its content bouquet and the first Kannada original film on the platform. The award-winning psychological thriller directed by Adarsh Eshwarappa and produced by Purple Rock Entertainers, features Payal Radhakrishna, Sowmya Jaganmurthy, Sidhaartha Maadhyamika and Shahshank Purushotham in lead roles and will premiere on 8th October on ZEE5.
Watch the first look here.
Bhinna is the story of an aspiring actress out on a solo trip with a movie script she might be a part of. She gets into déjà vu mode as some parts of the script have been real occurrences of her life. Reality and fiction blur as the story builds up and she struggles to get out of the concocted maze in her head. Like a puzzle, the viewer needs to put elements of the movie together to get to the suspense and solve the mystery.
Payal Radhakrishna said, “Adarsh is an amazing storyteller. To be a part of his vision is an honor. My role is a roller coaster ride of emotions and complexities. I had to internalize my feelings and reactions first to convincingly pull it off on screen. Playing this character has helped me enhance my acting skills in many ways. I am happy that with this premiere, ZEE5 audiences across the world will be able to watch Bhinna and cannot wait to hear their feedback and experience.”
Director Adarsh Eshwarappa said, “Bhinna is a movie on alternate reality with dwindling barriers. The truth is a perception of the viewers’ beliefs. Bhinna is a psychological thriller which requires repeated viewing to solve the mystery convincingly. I am thrilled that with the premiere on ZEE5, it will be easily accessible to viewers worldwide.”
Producer Purple Rock Entertainers said, “It gives us immense pleasure to associate with ZEE5 for the launch of Bhinna, a Kannada Original film. Adarsh is a fantastic director, the cast and crew have worked very hard and the end product looks excellent. With the premiere on ZEE5 and their massive reach, we are sure that people worldwide will get a chance to watch this suspense thriller.”
Aparna Acharekar, Programming Head, ZEE5 India said, “Meaningful cinema is a universal language. It appeals to movie lovers irrespective of the language. Bhinna is a masterpiece and Adarsh and the team have done a fantastic job. A movie like this one needs a grand showcase and we are excited about its release on our platform.”
Awards & Nominations