Gaurav Gill, Dean Mascarenhas face off in Round 3 of INRC 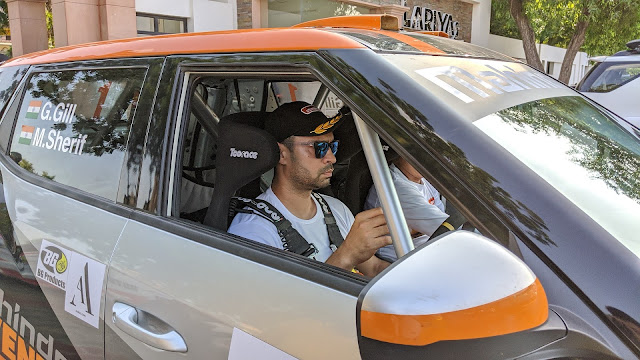 by Shrutee K/DNS
Jodhpur: Defending champion Gaurav Gill will be aiming to get his title defence back on track when the curtain goes up on the Maxperience Rally, Round 3 of the Champions Yacht Club FMSCI Indian National Rally Championship powered by MRF here on Saturday.
Mahindra Adventure’s Gill will be high on confidence after his impressive but ill-fated show in the WRC2 category of the World Rally Championship and will hope to make up for missing out on the podium in Round 2 due to a malfunction.
He had, however, looked unbeatable in Coimbatore, posting the fastest timings in the first three stages before he started having problems. Gaurav, along with his co-driver Musa Sherif, is currently fifth on the championship standing with 22 points and will be eager to move up quickly.
Gill will, however, face a stiff challenge from Dean Mascarenhas. The Team Champions’ driver, co-driven by Shruptha Padival, won the opening round and showed his class in Round 2 too, jumping 32 places to finish 10th overall and second in his INRC 2 category. He is on the second position in the overall reckoning with 42 points from two rounds.
However, it won’t be easy for both of them as Younus Ilyas will be breathing fiercely down their neck. The Race Concepts driver from Kochi, along with his navigator Harish Gowda, was in stellar form in the last round and finished second overall missing the top podium by just 04.600 seconds. He however won his INRC 2 category. He is placed fourth in the INRC overall category with 31 points.
Chetan Shivram, along with brother & co-driver Dilip Sharan, will also be in the mix and will look to maintain his momentum.
The Akshara Racing driver surprised everyone in the last round by winning the overall title as well as his own INRC 3 category.
Shivram showed great opportunism as he made the most of the top contenders’ misfortune.
He surged ahead on Day 1 itself and drove smartly the next day to avoid all the pitfalls that lurked in the stages, just off Coimbatore.
Fabid Ahmer along with Sanath G of Team Champions has been the stand-out performer of the season so far and will start as the dark horse once again. While the big names have been fighting it out to stay in the hunt, Fabid slowly clawed him way up the table to lead the championship with 49 points. He is also leading the INRC 3 category with 69 points.
Suhem Kabeer along with Jeeva Rathnam is another driver to watch out for in Round 3 of the INRC. Even though he is placed 7th overall, the position does not exactly tell the tale. He was in the hunt for a podium in the last round and was hot on the heels of the eventual winner Chetan Shivram. But, bad luck struck him mid-way into the final where he got stuck in the slush which saw him lose six minutes to slip out of contention.
Vaibhav Marate has been unbeaten in the INRC 4 category winning both the rounds. He is on top of the charts with 79 points and will hope to extend his lead in Jodhpur.
The Rally of Jodhpur, to be run on gravel, will cover about 300 kms over the two days, including 125 kms of Special Stages. As many as 53 teams will be seen in action in what promises to be a fast and furious affair.
The rally not only provides the drivers a great opportunity to prove their mettle but will also offer fans a great opportunity to catch the stars live in action in their mean machines.