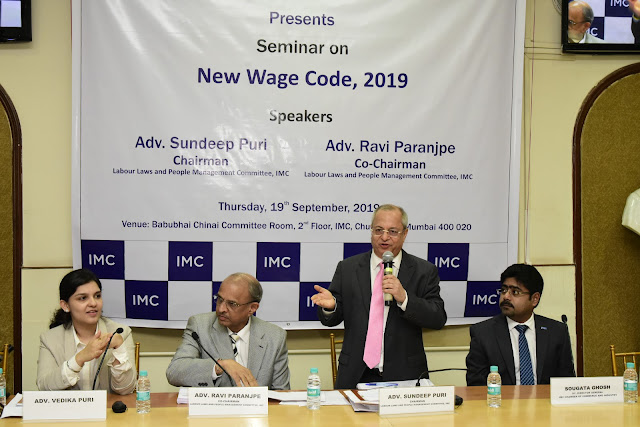 Speaking at the seminar, Adv. Sandeep  Puri, Partner, Sandeep Puri Associates & Advocates and Chairman and IMC’s Labour Laws and People Management  Committee welcomed the enactment of the new Bill at the interactive discussion on the newly passed Code of Wages Bill 2019 organised by IMC Chamber of Commerce & Industry on Thursday, September 19, 2019.

Mr. Puri said the Bill passed in July 2019 will herald a new milestone benefiting the 50 crore workers in the unorganised sector. The Code which has subsumed the four prevailing labour welfare Acts, viz., Payment of wages Act, Minimum Wages Act, Payment of Bonus Act and the Equal Renumeration Act, now covers 100% workers, has been simplified and rationalized compared to earlier Acts.

Mr Puri dealt in detail the various definitions and changes made in the new Bill when compared with the earlier four Acts. One of the major developments  has been the change of  definition of Worker,  which now includes all employees. It has also brought in the sales promotion professionals, and contractors working for any state or central govt or body,  for the first time under the ambit of the new Bill.

A simplified revised definition of minimum wage, which hitherto was subject to judicial interpretation in every case of suit filing,  will now include Basic +DA+ Retention Allowance, and  50% of Basic + DA would be used for handling all calculations. The new Code also clarifies the definition of Overtime, which would now be twice of wages.

In the new set up, minimum wages will be paid on geographical regional basis depending on the growth and development status of the region.

Coupled with it would be the fixation of minimum wages based on the skills, which have been categorised on easy to comprehend parameters. All these measures will introduce a spirit of competetion between regions and upgradation of skills of workers. Adv Puri said he was happy to note that the Code has a clarifed and arrived at a uniform date of 1st April as the start of accounting year system, as against the earlier period in which the accounting year varied from company to company depending, on their accounting  year.  The Bill also has put in place the system of digitised inspection through an App based computerised inspection scheme. This would ensure transparency while complying with the provisions of the new Bill and also make more accountability oriented.

About IMC; Set up in 1907, IMC is an apex Chamber of trade & commerce with headquarter in Mumbai. It has about 2700 direct members, comprising a cross section of the business community, including public and private limited companies and over 215 trade and industry associations through which the Chamber reaches out to over 2,50,000 business establishments in the country. IMC is the first Chamber in India to get ISO 9002-2000 certification which has since been upgraded to ISO 9001: 2008. IMC is the only business Chamber in India where, the Father of the Nation, Mahatma Gandhi, was associated as an honorary member.