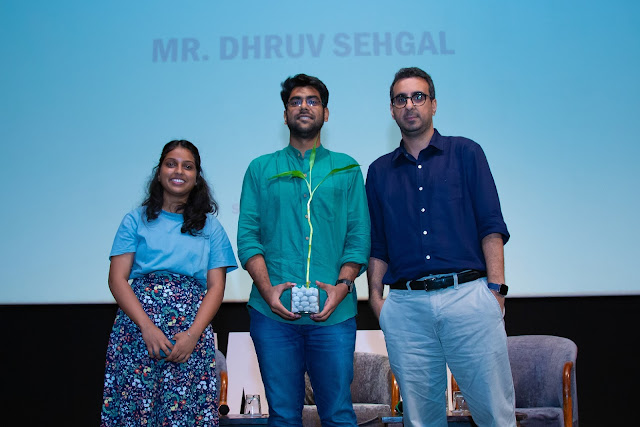 by Shrutee K/DNS
Mumbai, September  2019: Whistling Woods International (WWI), Asia’s premier Film, Communication, and Creative Arts institute, hosted an interactive session with the adroit writer, actor, and producer Mr. Dhruv Sehgal known for his work in 'Little Things' and with the YouTube channel 'Filter Copy'. Over the course of this exclusive masterclass for the students of WWI School of Media and Communication (SMC), the talented guest shared his knowledge and insights about the domains of writing and acting as a career in general.
Following an initial round of introduction, Mr. Rahul Puri, Head of Academics, WWI while moderating the session sought inputs on his career graph and the learnings thereof. Addressing the query, Mr. Sehgal detailed on how he got into this career, by stating, "I've always done what has interested me. My love for storytelling made me interested in various subjects since school days. I came to Mumbai to become an actor, however, I was not ready to wait to become just an actor. I was ready to do anything, which makes me feel alive and allows me to learn and grow.”
During the session, Mr. Sehgal shared insights about the prominent OTT platforms and mentioned about the tailor-made aspects (structure of storytelling) required to address the same. Elaborating about relatable content, which is well appreciated by the viewers, he cited, “For me, it's opposite of what traditional Bollywood is. It's not larger than life. It's telling the story of people who they are. The person should relate to the show they are watching and anything that is going to surprise him.”
While discussing his inspiration, Mr. Sehgal mentioned about his quest to learn new things and added, “I stopped reading the content I use to read some years back and have started reading a lot of graphic novels and other things I'm not aware of. Such practices help me in polishing my craft and honing my skills. He further stated,  "When you like some movie or write up in general, then ask yourself what you did particularly like about it. We need to figure out the pattern and structure, through which we can know what actually interests us. This is what enriches our art."
Advising the eager students on how one should be open to learning and exploring new things, he said, "Watch things you didn't see, read books that you find difficult, listen to music you think is good but unable to understand and notice things around as content is everywhere! You just need to be a keen observer to find it.”
As the event concluded, Mr. Rahul Puri honored the guest with a token of appreciation amidst the applause of an appreciative audience.
About Whistling Woods International: Whistling Woods International (WWI) is Asia’s premier Film, Communication, and Creative Arts Institute. Founded by one of India’s leading filmmakers – Subhash Ghai, WWI is one of the largest and best media institutes in the country. ‘The Hollywood Reporter’ has rated Whistling Woods International as one of the Ten Best Film Schools in the world in 2014, 2013 & 2010. WWI offers courses that vary in duration from 1 year to 4 years catering to all major verticals of the Media & Entertainment industry, namely Acting, Animation, Cinematography, Direction, Editing, Game Design, Music, Producing, Production Design, Screenwriting, Sound, Visual Effects, Media Management.