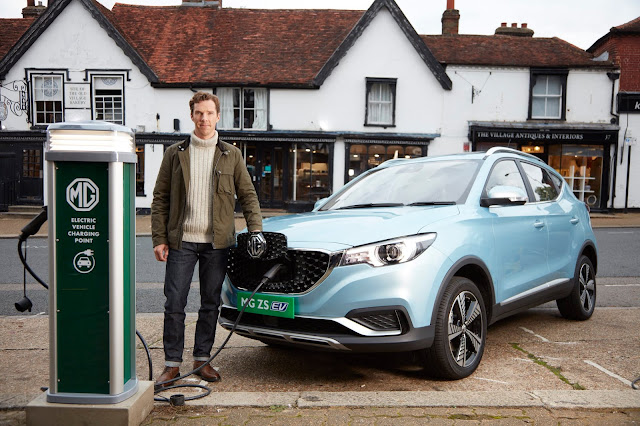 by Shrutee K/DNS
3 October 2019: MG (Morris Garages) Motor India announced Benedict Cumberbatch as the face and ambassador for their upcoming Electric Car “MG ZS EV” in India. The announcement comes as a further extension of the ongoing association between two British icons.
The MG ZS EV, which is slated to be unveiled in India in December 2019, is a testimony to the carmaker’s long-term commitment towards environment friendly mobility in India. Benedict, who was recently announced as MG India’s Brand Ambassador as well as roped in for the brand campaign and seen in the launch commercial for MG in India sporting the Hector Hybrid; will now don a new avatar for the MG ZS EV.
Benedict Cumberbatch on his association with MG said, “Since my childhood, I have grown up seeing and reading about MG’s. With the iconic MG brand set to drive into the future, I am delighted to be part of the brand’s journey in India. The ZS EV – India’s first connected electric SUV focuses on and furthers the required change in the environment which is the need of the hour. It is a start in India and am glad to be part of this start.”
MG India’s association with the acclaimed British actor also builds from the shared values and beliefs where both endorse community-led causes like diversity. Benedict Cumberbatch has been known for promoting gender equality and ‘diversity across the board’ within the global entertainment industry. Benedict has also many a times demonstrated his focus on the humanitarian crisis & is known for adopting cruelty free fashion.
“We are extremely charged up and excited to extend our association with Benedict for the MG ZS EV in India. The pure electric SUV from MG’s global stable has seen robust demand from customers in the UK, Thailand and other markets. It is part of our commitment to promote environmentally friendly mobility in India. We realize there is a need to become a catalyst for change and we are happy to do so with the MG ZS EV,” said Rajeev Chaba, President & Managing Director, MG Motor India.
MG Motor India, on its part, has been driving its vision of facilitating the creation of a more equal and diverse society with various in-house and on-ground initiatives. Women professionals currently account for 31% of the organisation’s workforce – the highest in the industry. MG Motor India has also associated with organisations such as IIMPACT an NGO engaged in providing quality education to the girl child through its learning centres in remote villages across the country. TRAX India to raise awareness on road safety across 200 schools and The Better India to raise awareness about community building through initiatives such as ‘MG Changemakers’.
About MG Motor India: Founded in the UK in 1924, Morris Garages vehicles were world-famous for their sports cars, roadsters, and cabriolet series. MG vehicles were much sought after by many celebrities, including the British Prime Ministers and even the British Royal Family, for their styling, elegance, and spirited performance. The MG Car Club, set up in 1930 at Abingdon in the UK, has more than a few hundred thousand loyal fans, making it by far one of the world’s oldest clubs for a car brand. MG has evolved into a modern, futuristic and innovative brand over the last 95 years. MG Motor India has commenced its manufacturing operations at its car manufacturing plant at Halol in Gujarat.