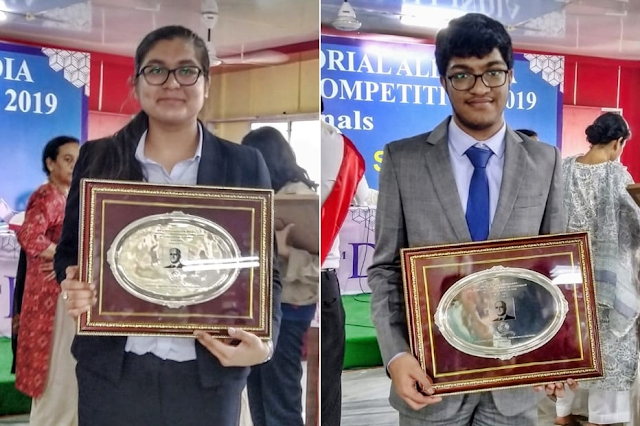 Kolkata: The national finals of the prestigious Frank Anthony Memorial All-India Inter-School Debate Competition were held at National English School, Kolkata on 25th September. In the Category II (students of Standards IX and X), eight schools from across India qualified after regional and zonal rounds.  This year, the theme of the debate was ‘DEMOCRACY’, and the topic for the national finals was “India needs an autocracy and not a democracy”.

Mrigaanka Sharma and Advait Sangle, class X students of Hiranandani Foundation School, Powai, Mumbai, having won the west zone rounds held on 19th August at Mumbai, represented the zone at national finals. The team lifted the trophy for the Best National School team. In individual prizes, Mrigaanka Sharma was  awarded the Best Speaker and Advait Sangle as the Runner-Up Speaker. Speaking on the occasion, Mrs. Kalyani Patnaik, Principal, Hiranandani Foundation School, Powai stressed on the need for holistic development of students. She appreciated the winners – Mrigaanka and Advait for their clarity of thought and concepts and their debating skills, which helped the school lift the National Trophy.

About The Frank Anthony Memorial All-India Inter-School Debate: The Frank Anthony Memorial All-India Inter-School English Debate is held in the honor of Frank Anthony. It is among the most prestigious inter-school, annual debate competition organised by the Council for the Indian School Certificate Examinations (CICSE). Participants represent their schools and are divided into two groups (Category I for students of Standards XI and XII and Category II for students of Standards IX and X).

Over 1,600 schools participate in the event each year.[1][2] The Debate competition is spread over three levels - Regional, Zonal and National Levels. Each school sends two students from each group mentioned above. The topic is only revealed to the students an hour before the actual debate by way of opening a sealed envelope in their presence. This ensures that no pre-written material can be used in the debate. Students are expected to speak for a total time period of four minutes which is followed by two minutes of questioning and rebuttals.

The students are allowed to and expected to refer to journals, magazines, and other books from the library during the one hour time to generate matter for their speaking time. No internet access or use of any electronic devices is allowed and referring to a written script during their speaking time is strictly discouraged. The debate stands out from other debate competitions because of its highly competitive and elitist edge. It's an extremely challenging debate which thoroughly tests the skills of a student.

Visit us at: https://www.hiranandanifoundationschoolpowai.com/index.php For