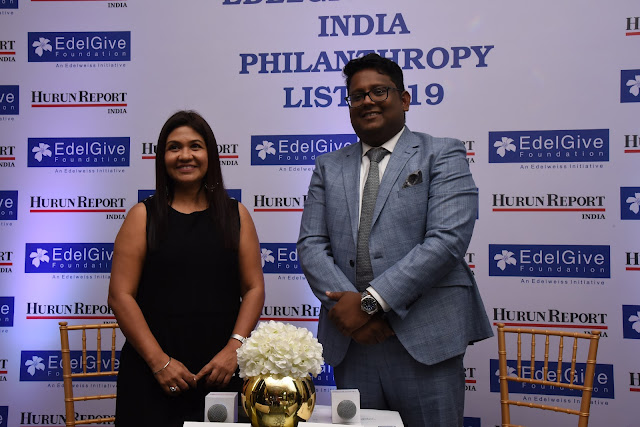 Mumbai, 14th October 2019: EdelGive Foundation and Hurun Report India today unveiled the sixth edition of ‘EdelGive Hurun India Philanthropy List 2019’. The list includes the names of the individuals from corporate India, whose own total contribution (personal and corporate) exceed INR 5 crore per year. The 2019 edition features 100 names – led by Shiv Nadar at the top spot. Azim Premji and Mukesh Ambani rank 2nd and 3rd respectively. The cumulative contribution of all the individuals on the list account for INR 4,391 crore, of which top 10 names accounted for 63%.

As compared to 2018’s list, the 2019 edition witnessed an 90% increase in the total contribution made (INR 4,391 crore in 2019 – up from INR 2,310 crore); as well as the number of people who contributed upwards of INR 10 crore per year towards philanthropic activities (72 in 2019 – up from 38). Education remained the most popular philanthropic cause, followed by Healthcare and Arts, Culture & Heritage. Forty-seven percent of funds (or INR 2,058 crore) were contributed by individuals in their personal capacity while the remaining 53% was contributed as CSR spends through their business groups. The cut-off for 2019 edition was extended from INR 10 crore in 2018 to INR 5 crore.

↑ Rank increase yoy ↓ Rank decrease YoY - No Rank change yoy * New to Top 10 Source: Hurun Research Institute & EdelGive Hurun India Philanthropy List 2019
Mumbai (31 individuals) is home to most of corporate India’s philanthropists, followed by New Delhi (16 individuals) and Bengaluru (11 individuals). The average age of the individuals in the sixth edition of EdelGive Hurun India Philanthropy List stood at 64 years (one year younger than 2018 edition). Rajiv Poddar of Balkrishna Industries (34 years) is the youngest individual to feature in the list while Dharam Pal Gulati of MDH (95 years) is the eldest individual. Six women too feature on the list – with Rohini Nilekani leading as the highest contributor – ranked 6th.

Commenting on the launch of the EdelGive Hurun India Philanthropy List 2019, Anas Rahman Junaid, MD, and Chief Researcher, Hurun Report India, said “Three key trends emerge from this year’s edition. First, as the rich Indians get richer; their contribution to the philanthropic causes too witness a jump. Two, there remains a lot of potential for corporate India to grow well by doing good. Case in point, the contribution from the top 10 individuals on the list account for 61%. In other words, the remaining 90 individuals account for 39%. There remains a lot of untapped potential which will come at the forefront with initiatives such as these. And three, corporate India is banking and investing on education – much more than any other cause. The megatrend at play here is that the focus of philanthropy in the country is shifting from donating to empowering. It is indeed a long term play, but would surely lead to lasting change in the years to come.”

Vidya Shah, CEO of EdelGive Foundation, said “When we embarked on this partnership with the Hurun Report India, our overall objective was to understand giving in India based on evidence and data. It is very satisfying to see the results show a significant growth in philanthropy in India, with the number of individual donors at an all-time high. As a sector, we now need to ensure that this ‘giving’ is resulting in a positive change in social indicators and being optimally utilized towards programmatic and organisational growth of our NGOs onground.”
Since the inception of the List in 2013, the no. of entrants in EdelGive Hurun Philanthropy List has grown 3 times during the same period. Interestingly, Hurun India Rich List has also registered a similar growth.

To put together a comprehensive list of the largest philanthropists of India is an almost impossible task. However, we believe at Hurun Report that, the EdelGive Hurun India Philanthropy List is the most serious and authoritative effort to date, identifying the individuals and highlighting the causes they donate to. To make this list, the Hurun Report surveyed 1,000 of India’s most successful entrepreneurs, including those from the Hurun India Rich List 2019, meticulously cross-referencing the results with media reports and charitable foundations. In the course of the research, Hurun Report attended non-profit related seminars, as well as meeting with scholars, experts, philanthropists and senior members of charitable foundations.

Hurun Report includes cash and cash equivalents pledged with legally binding commitments for the twelve-month period from 1 April 2018 to 31 March 2019.

Hurun Report included contributions made by companies in which an individual had a significant share by applying the percentage the individual has of the company on the contributions. So, for example, Biocon for the period made contributions of INR 8 crore, and Kiran Mazumdar-Shaw holds 60.68% of the shares of the company, so Hurun Report recorded Shaw’s contributions as INR 4.92 crore. In 2015, Azim Premji had transferred a significant part of his shareholding amounting to 39% of the shares of Wipro to trust and foundation, which has been taken into account that year. Since this is a one-time philanthropic contribution, it has not been included this year.

The list includes the only individual born and bred in India regardless of the passport they currently hold. Values are rounded, and past figures are subject to exchange rate fluctuations. tion of the wealthiest individuals across the globe. Hurun Report is the largest compiler of the rich list globally.

Hurun Report India serves as India’s definitive voice celebrating wealth creation, innovation, and growth. Last year, Hurun further expanded its repertoire by releasing the Hurun Global Rich List 2019, a ranking of the 2,470 US dollar billionaires, so-called ‘Nine-Zero Club’, currently in the world and the seventh India Rich List which ranks the 953 richest individuals in India, allowing for comparisons between some of the most dynamic economies in the world. The purpose of this list is to try and tell the story of modern India through the eyes of an entrepreneur.

The Hurun India Philanthropy List ranks the most generous individuals in India and is now on its 5th anniversary. Indians give much more generously than many have previously understood.

In 2018, Hurun Report launched the Hurun India Women Rich List, aimed at celebrating the success stories of some of the most amazing women wealth creators and inheritors.

In 2019, Hurun India Art List was launched, aimed at tracking some of the most successful artists who are alive today by way of cumulative auction prices. This we believe is a watershed moment in the art history of India, where we expect more entrepreneurs to start collecting.

In 2019, Hurun Luxury Consumer Survey was debuted to understand and speak about spending habits of ultrahigh net worth individuals.