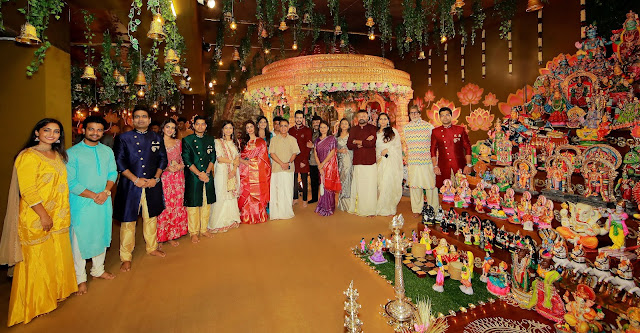 National : The Kalyanaraman family hosted a splendid affair as part of the Navratri festivities at their residence in Thrissur, Kerala this week. The Navratri Pooja which is an annual affair at the Kalyanaraman residence was attended by none other than the global brand ambassador of Kalyan Jewellers and Bollywood’s very own Shahenshah Mr. Amitabh Bachchan. The glamorous evening was not only attended by friends and family but the who’s who of the movie fraternity in South India. The Navratri Pooja festivities witnessed invitees coming from all parts of India to offer their prayer before the Bommai Kolu.

During Navratri, Kalyanaraman family practice the tradition keeping of ‘Bommai kolu’ at their abode. As part of this tradition, the idols of the Gods and Goddesses from the Hindu mythology are kept on odd numbered steps. Usually, it is the children of the house who are encouraged to take the lead here, and this in turn helps them better understand mythology and the many narratives. The order in which the Bommai or the dolls are kept also has its own significance. It is symbolic of the growth of human life from a materialistic level to the elevated spiritual. At the very bottom of the steps the ordinary scenes of village life, temples, towns and it elevates to the most powerful forms of Gods towards the higher steps. Navratri and Bommai Kolu also serve as a platform for art and culture. The star studded evening ended with a singing and dancing session thereby making worship through music and art an integral part of the celebration.

About Kalyan Jewellers: Headquartered in Thrissur in the state of Kerala, Kalyan Jewellers is one of the largest jewellery manufacturers and distributors in India. The company draws from its strong roots of over a century in the business of textile trading, distribution and wholesaling. Starting with the first jewellery showroom in 1993, Kalyan Jewellers has enjoyed a long-standing presence in the Indian market for over two decades.  It has set industry benchmarks in quality, transparency, pricing and innovation. Kalyan offers an array of traditional and contemporary jewellery designs in gold, diamonds and precious stones catering to the distinct needs of the customers. Kalyan Jewellers has grown to 141 showrooms across India and West Asia.