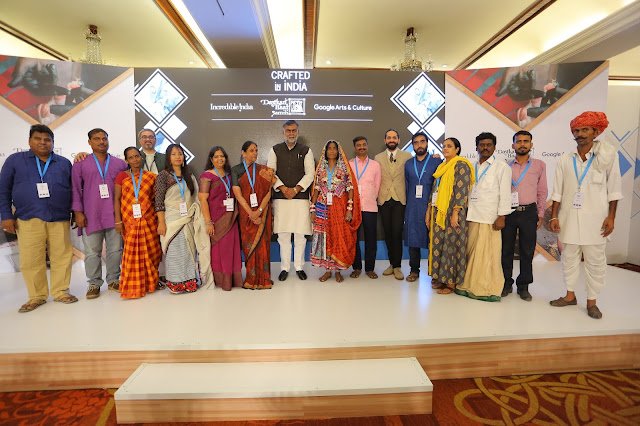 Partners with the Ministry of Tourism, Dastkari Haat Samiti and 20 other cultural institutions to help people discover the beauty, making of and history of crafts from all 29 states of India
by Shrutee K/DNS
Mumbai : To showcase India’s rich handicraft heritage and make it accessible for the world to experience, Google Arts and Culture unveiled its latest exhibit, ‘Crafted in India’. In partnership with the Ministry of Tourism, Dastkari Haat Samiti and 20 other cultural institutions, the project, available at g.co/craftedinindia, gives people an immersive tour of varied Indian craft forms -- from fabrics to embroidery, wall paintings to stonework, metal casting to wood carving, celebrates the artisans behind it, and promotes heritage tourism in India.
The new online project ‘Crafted in India’ was unveiled at an event hosted this morning in New Delhi, in the presence of Shri Prahlad Singh Patel, Minister of Tourism in India, Jaya Jaitly, President Dastkari Haat Samiti, Smt. Meenakshi Sharma, Director General (Tourism), Ministry of Tourism, and Amit Sood, Senior Director Google Arts & Culture. 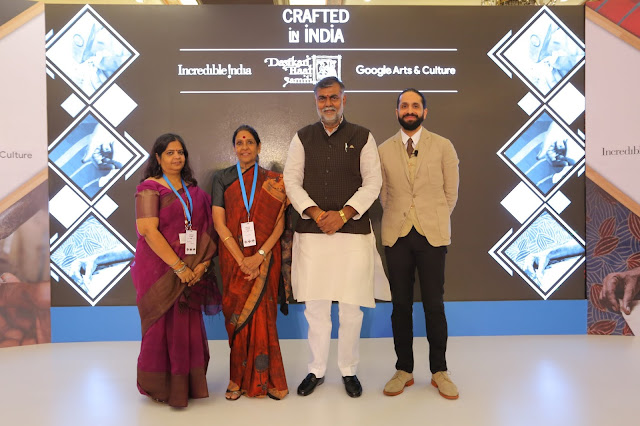 From the exquisite basketry of the Angami Nagas to the Bell Metal Craft of Payyanur or the 300 year old Mata Ni Pachedi textile art of Gujarat, ‘Crafted in India’ will present 280+ online exhibitions, 11,000+ images and videos. Viewers can also discover the story behind Channapatna Toys, conceptualized by Tipu Sultan back in the 18th century, and experience the making of Chhau Masks -- a flamboyant mask-making craft used by traditional Chhau dancers who perform across villages in West Bengal and Odisha. Moreover, viewers can travel behind-the-scenes, to the cities, towns and villages of craftspeople, who have helped preserve and nurture varied craft forms -- including the 500-year-old Kashmiri Sozni embroidery or Andhra Pradesh’s ancient craft of leather puppet making.
Shri Prahlad Singh Patel, Minister of State (Independent Charge) for Tourism, said, “Crafts have not only become a central part of India's economy, but are integral to India’s rich heritage and culture. In keeping with the Prime Minister’s call for every Indian to visit 15 locations in the country before 2022 - we are thrilled to partner with Google for ‘Crafted in India’, as part of our internationally acclaimed tourism campaign -- Incredible India!. This will encourage both Indian and global audiences to ‘Explore India and carry a craft back’ through discovery and exploration.”
Amit Sood, Senior Director, Google Arts & Culture, said, "Google is committed to preserving artistic and cultural treasures around the world. Over the years we have done many projects in India that puts a global spotlight on India's rich culture, and celebrates the people behind it. The wealth of history and culture that Indian crafts exhibit is breathtaking. It’s an honor to partner with the Ministry of Tourism and Dastkari Haat Samiti to put spotlight on incredible handicraft traditions, to preserve them on Google Arts & Culture and most importantly to celebrate the people behind them. I am confident people around the world, but also Indians will be as amazed - as I was - by the exhibit and little nuggets like the fact that Lambani women continue to create rhythms with needle and thread, and their work is popular among people across cities."
Jaya Jaitly, President, Dastkari Haat Samiti said, It has been a great opportunity to work with Google Arts & Culture. What struck me was how the project kept expanding as the beauty of our country was being unfolded by our photographers. Through great imagery, we wanted to tell a deeper story of Indian crafts and its people. India proves itself as a country of multiple cultural stories that carry different traditions, communities, languages, style of dressing and lifestyles. I hope the world recognises and honours these living traditions through the Crafted in India project.
The exhibit also touches upon the value of waste and various ways of crafting paper from the most unexpected materials -- from pineapple fibres to old currency, and animal dung. People can discover more about the 40 different waste materials that can help produce paper, including damaged currency notes, whilst also learning more about the various techniques used to make a range of handmade paper products made using waste materials -- these include paper trays, decorative sheets, notebooks among others.
Encouraging audiences to explore more, ‘Crafted in India’ will also be hosting an interactive ‘Guess That Craft’ exhibit. Through a series of clues, the exhibit uncovers the various art forms of India in a fun and engaging manner.
21 partner institutions have contributed to making the initiative a reality, including the Academy of Fine Arts and Literature, Avani Society, Chhatrapati Shivaji Maharaj Vastu Sangrahalaya, Craft Revival Trust, Crafts Museum, Devi Art Foundation, Dr. Bhau Daji Lad Mumbai City Museum, Indian Museum Kolkata, JD Centre of Art, Jaipur Virasat Foundation, Museum of Art & Photography, National Museum, Raja Ravi Varma Heritage Foundation, Salar Jung Museum, Sanskriti Museum, SEWA Hansiba Museum, Surabhi Foundation, Worldview Impact Foundation, among others.
Google Arts & Culture has partnered with more than 2000 institutions in 80 countries globally, with over 50 million people using the Google Arts & Culture platform every month. In India, Google Arts & Culture has partnered with over 75 cultural institutions to bring India’s rich culture online, and features more than 250 monuments and 20 UNESCO World Heritage Sites. Users all around the world can explore these on Google Arts & Culture website and mobile app for free.
About Google Arts & Culture
Google Arts & Culture is an immersive way to experience art, history, culture and world wonders from over a thousand organizations worldwide.
Google Arts & Culture is an innovation partner for cultural institutions.
The team works on technologies that help preserve and share culture and allow curators to create engaging exhibitions online and offline.
Google Arts & Culture is available for free for everyone on the web, on iOS and Android.
Read more here.