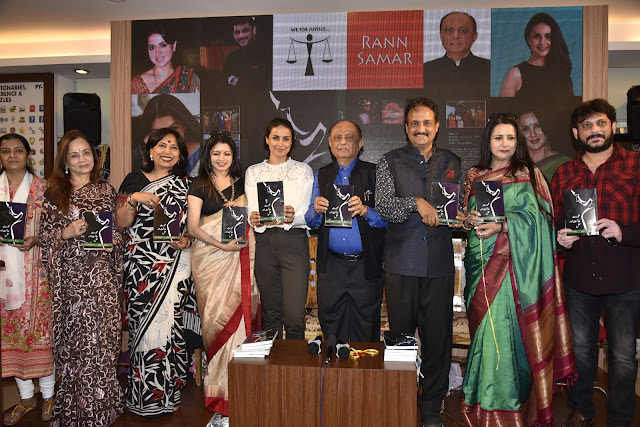 by Shrutee K/DNS
Mumbai: Women’s empowerment refers to the ability of women to enjoy their rights, to control and benefit from the resources, assets, income and their own time, as well as the ability to manage risk and improve their economic status and well-being. Abha Singh, a social activist and lawyer, who is practicing in the High Court of Judicature at Mumbai is launching her book in which she has been the co-author “Stree – Disha aur Dasha”, which focuses and highlights women empowerment and the judicial laws that are accessible for woman protection. The book launch event will be held on 10th January 2018 at theTitle Waves Book Store, Bandra. Many prestigious dignitaries like WarisPathan (MLA), MajeedMemon (MP), Ms.GulPanang (Actor, Entrepreneur, and Activist), Shaina NC (BJP Leader), NoorjahanSafiaNaz (BMMA Co-convenor), Ms. Poonam Dhillion (VP BJP Mumbai and Actor) and Ms.Bhagyashree (Actor) will be attending the event.
Abha Singh has contributed considerably in the realm of women’s right, gender equality, and justice. She is often regarded as the bluntest firebrand lawyer in Mumbai and has been an active participant in some major celebrity cases as well as social cases like the accusation of Bollywood actor Salman Khan in the hit and run case and the AIB roast case. She has been a former bureaucrat and is now a renowned advocate who is an ardent crusader for woman’s rights. One of the prime focuses of the book is the status and condition of women in India being pitiable as a result of inadequate knowledge about their legal rights.  The book also explores the nature and extent of crimes against women, such as domestic violence and rape, and discusses various legal remedies that can be availed by women who have been subjected to such atrocities.
Abha completed her graduation from Isabella Thoburn College, Lucknow and got her M.Phill on child rights from Jawaharlal Nehru University, New Delhi. She got married at a very young age but still managed to qualify for the IAS exam.  She later completed her LLB from Mumbai University, while she was working. She is a Chevening Scholar from London School of Economics where she did a course on Leadership. She worked as a customer appraiser in Bombay custom house till 1994 and later joined IPS. Seeing the call of duty beyond service, she gave up her successful career and finally started her practice as a lawyer in the Bombay High Court to serve a larger cause by donning the robes of the legal profession.
Recently she was invited by the School of International and Public Affairs, Columbia University, USA, as a speaker at the “India Dialogues”. The primary focus of her speech was the impact of the #Me Too movement on the corporate culture in India. She was also invited as a speaker at the TEDx Oxbridge conference to express her views on how laws have failed to protect women in India. There she talked about how the regressive mindset, corrupt police, no witness and victim protection and court procedure having technical loopholes have increased the cases of Dowry, honor killing, acid attack, stalking and VIP racism, which is causing a big hindrance in the way of woman empowerment.
She also runs an NGO by the name Rann-Samar through which she provides free legal assistance to helpless women and slum dwellers who have been unfairly persecuted by local authorities for land that is rightfully theirs. The NGO also provides computer training to convicts of Lucknow and Jaunpur Jail. She has adopted a village in Dadaura, in Barabanki where the NGO is working for women empowerment. Girls who had dropped out due to poverty have been readmitted in schools. The NGO is looking after their fees, books and uniforms. She is also running a free legal Aid Centre in Dharavi.
Talking about her mission, Abha Singh says, “An educated, healthy and cultured society is a necessary prerequisite for the wholesome development of any nation. Public awareness is the most important issue that we deal with today. Appraising the oppressed of their rights can go a long way in uplifting women in society and help fulfill our duties as upstanding citizens of society. She wants the women and children to be free of the burden of inequities by empowering them with education and awareness about their rights”.