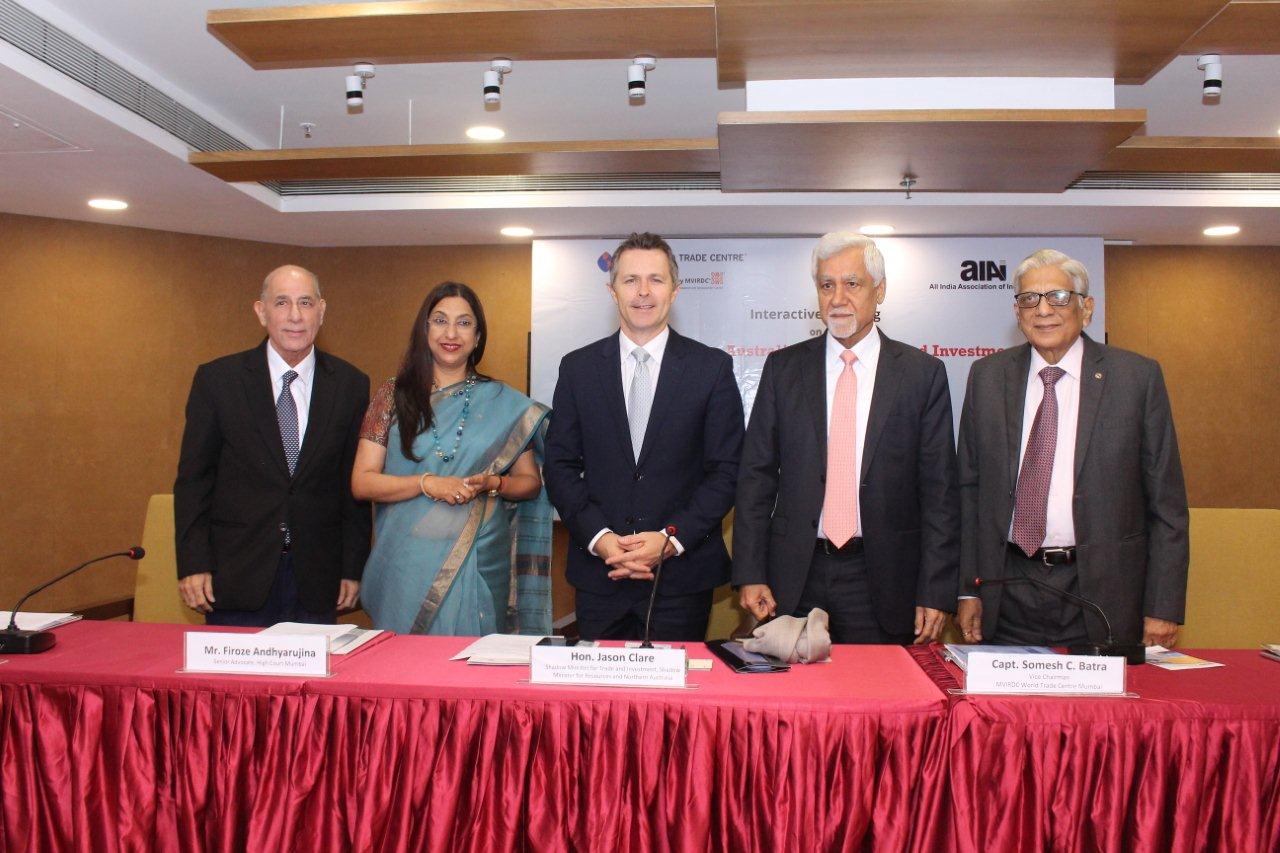 by Shrutee K/DNS
“India is an economic superpower in the making. The entire world knows it and Australia knows it too well. India and Australia have shared values of democracy and cultural diversity. The Indian population in Australia has tripled in the last decade and today Australia has the largest proportion of Indians in total population among all countries. India is the fifth largest trade partner of Australia. Today, both the countries are engaged in the negotiation of two trade agreements, one is the 16-country Regional Comprehensive Economic Partnership (RCEP) and the other is the bilateral free trade agreement. There is optimism that the RCEP agreement will be finalized in the next 12 months. After the conclusion of the RCEP pact, India and Australia will finalize their bilateral trade agreement,” said Hon. Jason Clare, Shadow Minister for Trade and Investment from North Australia at an interactive meeting on ‘Strengthening Australia-India Relations’ at WTC Mumbai. The event was jointly organised by MVIRDC World Trade Centre Mumbai and All India Association of Industries (AIAI)
Speaking about the unexplored partnership potential, Hon. Clare said, “Even though India is a huge country, Australia’s trade with India is just as much as its trade with the tiny country of New Zealand, which has a population of just 4.7 million. There are only eight direct flights a week between Sydney and India, compared to 21 direct flights between Australia and China daily and 35 direct flights to Singapore daily. In the last 10 years, hardly a few Bollywood movies were shot in Australia, although the country has tremendous scenic beauties. Today, in cricket parlance, India-Australia bilateral relation is comparable to a 20-20 match, which is fast, furious, but has short term outlook. Policymakers in both the countries are determined to transform this relation to the level of a test match, with a long term vision.”
Hon. Clare further added, “According to some studies, the middle class population in Asia will be 3 billion by 2030. The business communities in Australia and India must partner together to target this market. The purpose of my trip to India is to discuss with the business community and policymakers in the country on possible areas of collaboration.”
Sharing insights on the scope for cooperation in education, vocational training and tourism, Hon. Clare said, “Today, India has 850 million people below the age of 35 and Australia seeks to engage with this segment of the population productively. Government of Australia supports its students to study and undertake internship projects in India. Similarly, Indian students can also explore education opportunities in Australia, which has top grade universities and high quality vocational education system. The number of students choosing Australia as education destination has grown in double digit in the last one year. Similarly, in the tourism sector, the number of Indian tourists visiting Australia has grown 16% in the last 12 months.”
Highlighting the historical relationship between both the countries, the shadow minister informed, “Around 12 Indian soldiers fought for Australia during World War I and of them two soldiers lost lives. Australian Government has built a memorial to honour the lost lives of World War I martyrs, including the Indian soldiers.”
Earlier in his welcome address, Capt. Somesh Batra, Vice Chairman, MVIRDC World Trade Centre Mumbai said, “India and Australia are natural allies. Archeologists have found traces of Indian DNA dating back 5,000 years in Australia. Today, the bilateral trade is in favour of Australia, with India’s exports at USD 4,012 million and imports at USD 13,994 million during 2017-18. Although China is the largest trade partner of Australia today, the country’s trade is likely to shift towards India because of huge untapped potential. Australia is the third largest education destination for Indian students. There is tremendous opportunity for collaboration in areas such as infrastructure, healthcare, agriculture and defence.”
The event was attended by representatives from trade and industry, consular corps, academic institutions, think tanks and non government organizations. The event generated fruitful interaction between the audience and the shadow minister on a wide range of issues such as mutual cooperation in education, tourism, trade, investment, among others. The interactive meeting was followed by Networking Reception.