Mumbai - India, 23 January 2019: The Hon. Minister of Tourism, South Africa, Derek Hanekom, visited India, to engage with key representatives of the travel and tourism ecosystem in an ongoing effort to strengthen tourism ties between the two nations. Accompanied by Sisa Ntshona, CEO, South African Tourism, and Maropene L Ramokgopa, Consul General, South Africa, the Hon. Minister reiterated commitment to enhance destination marketing support in India, which has consistently been among the top 10 source markets for South Africa.  The delegation shared a positive outlook for the Indian market, noting that as of June 2018, total spend by Indian travellers in South Africa had increased by 20% and that there was an upswing in the average length of stay (+7.7%) and total bednights (+4%).

“We want 2019 to be the year of the great leapfrog for tourism from India. The growth in total spend and the average length of stay signifies that Indians travelling to South Africa are staying longer, exploring more and experiencing newer activities than ever before. This certainly is a positive indicator of the potential growth in the market and gives us the confidence to continue introducing new regions and experiences,” the Minister stated. 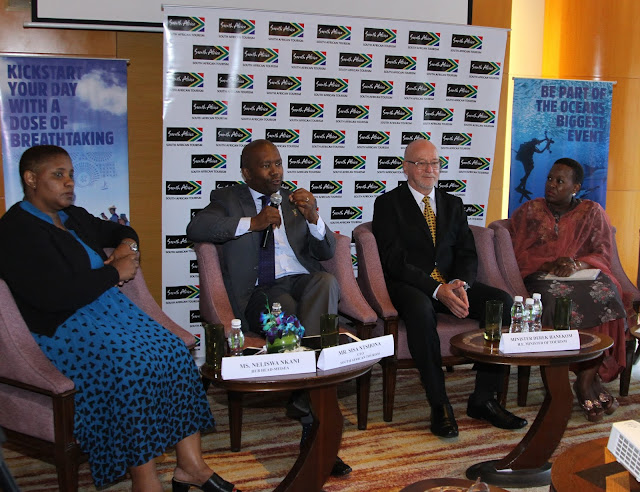 Reinforcing India as a key source market, Sisa Ntshona, CEO, South African Tourism, added, “India has been a key source market for us and will continue to play a critical role in our long-term vision of attracting 5 million additional visitors, including 4 million international tourists by 2021. We aim to surpass 100,000 visitors from Indian in the current year of 2019. Towards this ambition, we remain committed to continue investing in our promotion and engagement efforts, both with our Indian trade partners and travellers, while bringing diversified products to the market.”

The Minister indicated that a Visa Simplification Agreement, addressing various initiatives to simplify ease of travel to South Africa from India, was expected to be signed between the two nations.  “There has been a lot of improvement in the length of time it takes between the application and issuance of South African visas for Indian travellers. We recognize the need for a more solutions-driven approach that eases visa regulation to unlock the full potential of tourist arrivals from India. We are currently running a pilot for e-visa processes and on successful completion, the intention is to begin rolling-out e-visas in other countries,” the Minister added. 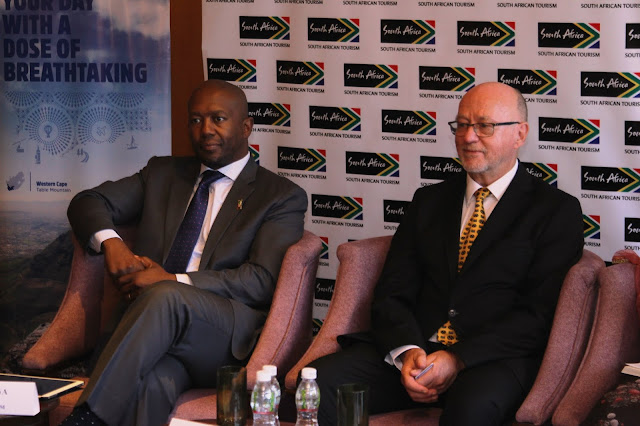 Speaking about new initiatives to ease visa applications, Maropene L Ramokgopa, Consul General, South Africa, said, “The Consulate of South Africa will work closely with South African Tourism to accredit select travel agents and tour operators to allow fast-tracking visa applications from preferred partners. The efforts would seek to further to reduce the time for visa issuance, which is currently, between 5 to 7 days from time of application, while enabling faster turnaround times during peak seasons.”

The Minister acknowledged air connectivity as a key driver for outbound travel particularly MICE and business tourism from India.  Speaking about direct flights between India and South Africa, the Minister said, “There are currently serious discussions about the possibility of resumption of the direct route.” From January to June 2018, MICE accounted for 28% of the Indian traveller visits while 23% Indians travelled for business. On the other hand, leisure travel continued to gain an increasing share of the traveller pie currently contributing to 25% of the total visits from India.

Ms. Neliswa Nkani, Hub Head, Middle East, India, South East Asia, South African Tourism, added, “With the depth of experiences and breathtaking natural beauty of South Africa, there is immense potential to diversify our promotions of innovative and unique experiences. We are focused on transforming the way we promote our destination in India and will adopt a more localized approach to selling South Africa through the lens of the Indian traveller.”