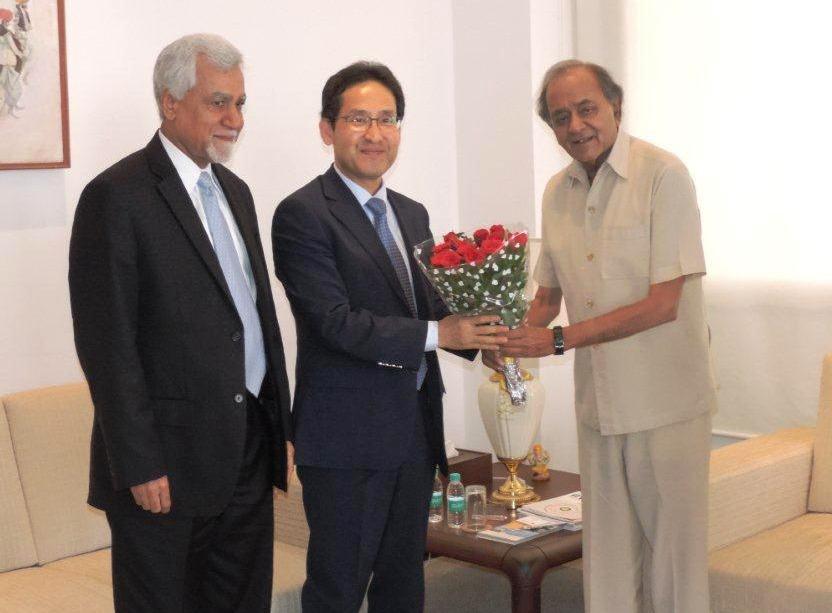 Mumbai, July 7, 2016: At a time when the governments of South Korea and India are reviewing the Comprehensive Economic Partnership Agreement (CEPA) between both countries, the visit of Mr. Soung-eun Kim, Consul General of the Republic of Korea to the World Trade Centre Mumbai was most timely.
During the visit, Mr. Kim discussed strategies to strengthen bilateral trade and investment between both countries. It may be recalled that South Korea is the eighth largest trading partner of India with bilateral trade between both the countries at USD 16.59 billion as of 2015-16. Experts project that the bilateral trade volume between both countries would double in the next 3 years.
“Prime Minister Narendra Modi’s visit in May 2015 to South Korea and G-Fair Korea 2016 held in Mumbai have evoked interest amongst the business community”, pointed out Mr. Kim.
Mr Kamal Morarka, Chairman, World Trade Centre Mumbai, who was the convener of the meeting expressed his keen interest in strengthening trade ties with South Korea and invited trade delegations to explore possibilities of investment opportunities in infrastructure sector in the wake of the 100 smart cites project being planned by Prime Minister Narendra Modi. “Maharashtra being the economic and commercial capital of India and a premier industrial state, South Korean companies such as LG Group, Hyundai, Posco, Daewoo have set up operations here. World Trade Center Mumbai extends all possible support and assistance to such companies looking to invest in Maharashtra. The government has improved the ease of doing business by reducing the number of statutory permissions and created a conducive environment for investments”, Mr. Morarka remarked.
He further added, “World Trade Centre Mumbai will lead a delegation to South Korea in September 2016 to visit the Buyer Delegation Program to seek out collaborations in the leading sectors such as ports, construction, power, infrastructure, engineering and automobiles”. Mr. Morarka finally expressed confidence that under the leadership of the consul general, trade promotion and investment activities will be further enhanced.
Capt. Somesh Batra, Vice Chairman, World Trade Centre Mumbai, who was also present at the meeting, said, “India has immense opportunity in almost every sector, since it is a consumer market with the second largest population. Specifically, there is a huge unmet demand in the construction sector.”
The other World Trade Centre Mumbai officials who attended the meeting include Ms. Rupa Naik, Director-Projects, World Trade Centre Mumbai and Mr. Y. R. Warerkar, Executive Director, World Trade Centre Mumbai.The meeting assumes significance as it was held days after Smt. Nirmala Sitharaman, Minister of State (Independent Charge) for Commerce and Industry, Government of India and Mr. Joo Hyunghwan, Minister of Trade, Industry and Energy of the Republic of Korea reviewed the India-Korea CEPA in New Delhi on June 18, 2016.