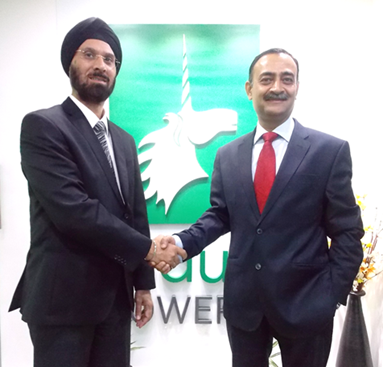 by Shrutee K/DNS
New Delhi, 04 July 2016: Indus Towers, the country’s largest telecom tower company, announced the appointment of Mr. Tejinder Kalra as the Chief Operating Officer, as on 1stJuly 2016. With over 26 years of experience in the telecom and telecom services industry, Tejinder holds an extensive experience in strategy development, implementation and service delivery across geographies.
Speaking on the occasion, Mr. Bimal Dayal, Chief Executive Officer, Indus Towers said, “In line with Indus’ pursuit of building a strong leadership team for the future, I would like to announce appointment of Tejinder Kalra. His passion, strategic clarity and disciplined execution will help ensure that Indus Towers’ continues to deliver our best to our customers.”

Tejinder joins Indus Towers from Nokia, where he was the Global Head for Bharti Business in his most recent role. He has worked with Nokia for over 13 years, and has been a pivotal part of their growth story. In his last role, he managed the end to end P&L ownership for Bharti Telecom business globally. He was also the Sub-Region Head for Central, East and Western Africa in an earlier role where he helped set-up Nokia’s Airtel operations in Africa. Talking about his move, Mr. Tejinder Kalra, Chief Operating Officer, Indus Towers said, “I am honored to take up this role, and feel enthusiastic about the opportunities that lie ahead. I look forward to working closely with the entire Indus Towers team as we embark on this exciting journey.” Tejinder has been associated with Reliance Infocomm, Satyam Infoway, Sprint RPG India amongst other organizations in the past. He has done his engineering from Thapar Institute of Engineering & Technology and Executive Diploma in International Business from IIFT.
About Indus Towers Limited: Indus Towers Limited is an independently managed company offering passive infrastructure services to all telecom operators. Indus is headquartered in the National Capital Region, New Delhi. Founded in 2007, Indus Towers Limited has been promoted under a joint venture among entities of Bharti Infratel Limited (rendering telecom services in India under the brand name Airtel), Vodafone India (rendering telecom services under the brand name Vodafone) and Aditya Birla Telecom (rendering telecom services under the brand name Idea), who created history by collaborating to share telecom infrastructure.

Indus has a presence in the 15 major telecom circles of India, and has achieved over 270,006 tenancies till date, a first in the telecom tower industry globally. With the current count of over 119,881 towers, Indus has the widest coverage in India and is also the largest telecom tower company in the country.

Indus’ vision of “Transforming Lives by Enabling Communication” is setting a new paradigm for a networked economy, on a world leading scale, whereby there is inclusive and impactful growth for all.
For any further information please visit our website www.industowers.com