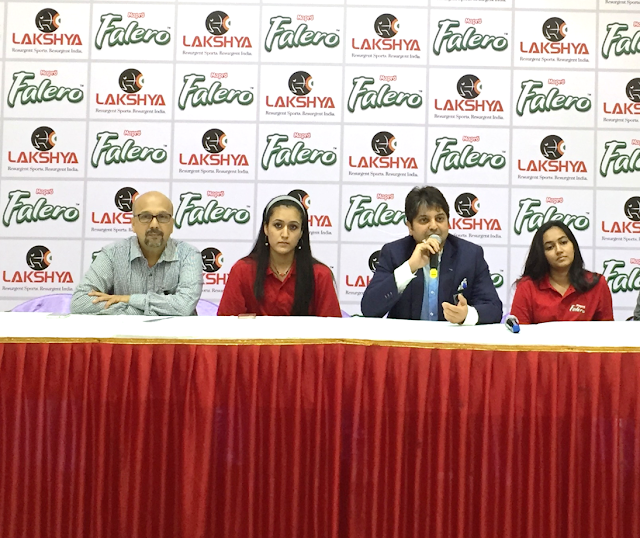 by Shrutee K/DNS
Mumbai, July 15:   India’s 21-year-old ‘Premier Paddler’ Manika Batra has received a shot in the arm ahead of her participation in the 2016 Rio Olympics. Pune-based Sports NGO Lakshya, along with confectionery brand Falero has joined hands to support the lanky table tennis star from Delhi. Announcing the association, President of Lakshya, Vishal Chordia said, “We are happy that Falero has also joined hands with Lakshya to support the cause of sports and extended support to Manika”.
Manika qualified for the women’s singles event by winning the South Asia group of the qualification tournament in April 2016 and is considered to be one of the brightest prospects in Indian table tennis.With the signing  of  Manika, Lakshya is now supporting  a total of  25 elite  athletes so far in the disciplines of shooting , boxing , wrestling , tennis , badminton , athletics, chess and table tennis.
Besides Manika  and men’s table tennis player Soumyajit Ghosh, Lakshya will have six  players representing the country at the Rio Olympics, the others being wrestler Ravindra Khatri, badminton doubles stars Sumeeth Reddy and Manu Atri and tennis player Prarthana Thombare, who will be partnering Sania Mirza in women’s doubles in tennis.
Speaking to media persons, Manika acknowledged the help received from my family and now Lakshya and Falero. “I take this opportunity to thank my parents, especially my mother who has been travelling with me from the age of four and continues to support me. I also wish to thank Lakshya and Falero for supporting me and other sportspersons. It gives the opportunity to concentrate more on our game,” said a modest Manika, the top-ranked Indian with a world ranking of 115.
“It’s amazing that I have qualified for the Olympics in Rio, which is my maiden participation in this quadrennial world event. Since it’s my first appearance at the Olympics, there is no pressure only plenty of excitement and I plan to just play well, give my best and have fun,” said Manika, who is currently training hard under Korean coach Pak Myong and recently returned from a week-long training stint in Tokyo, Japan last month.
Speaking on the occasion Table Tennis star and Arjuna Awardee, Kamlesh Mehta, who is also one of the mentors of Lakshya said that table tennis players needed support and with Indians players now making a mark at world stage, support to Manika and Soumyajit augurs well for the sport. “Manika is young and will need ongoing support to hone her skills and climb up in world rankings and with Lakshya now supporting table tennis this looks achievable.”
“Manika is one of the most hard-working player among the Indians. She is also the highest-ranked player in the country and I expect her to break into the top 100. I am proud of your achievements and I am confident that you will do your best at the Olympics and make us proud,” Mehta told the youngster.
Speaking on the tie-up, Ms Prachee Banthia Dhondge, Marketing Manager for Falero said, “Manika is an emerging star who is on her way to make us all proud, and nothing should subdue her sense of youthful excitement. We are happy that Falero can associate with her dream and are thankful to Lakshya for making holistic development of these talented youngsters a mission that we can be a part of.”
The 20 year-old Manika started playing table tennis at the tender age of 5 and was influenced by her elder sister, Anchal . She rejected a scholarship to train at the Peter Karlsson Academy in Sweden at the age of 16 . The youngster studied at the Jesus and Mary College for a year but decided to drop out in order to concentrate on table tennis.
Manika represented India in table tennis at the Commonwealth Games, Glasgow in 2014 where she was a quarter-finalist. The paddler won two silver medals in the team events and a bronze medal in the singles category at the Commonwealth Table Tennis Championships in December, 2015.
The 5'10 tall upcoming star won three gold medals and one silver medal at the 12th South Asian Games in Guwahati and Shillong this year. Batra won three gold medals at the 2016 South Asian Games, winning the women's doubles event (with Pooja Sahasrabudhe), mixed doubles event (with Anthony Amalraj) and women's team event (with Mouma Das and Shamini Kumaresan).
She clinched the gold medal in the 2nd division of the World Table Tennis Team Championships in March. A fan of Sachin Tendulkar, who she considers as her inspiration, she also admires Saina Nehwal.
About Falero: Mapro Foods Private Limited is one of India’s most modern, innovative, quality-focussed and hygienic fruit product companies. Founded in 1959 in the hill-town of Panchgani near Mahabaleswar, it is the pioneer of products such as jelly sweets, fruit cubes with fruit juice and rose syrup with rose petals. In 2009, Mapro launched Falero - a soft, pulpy, fruit confectionery which, unlike other chocolates or sweets, contains 25% real fruit pulp.