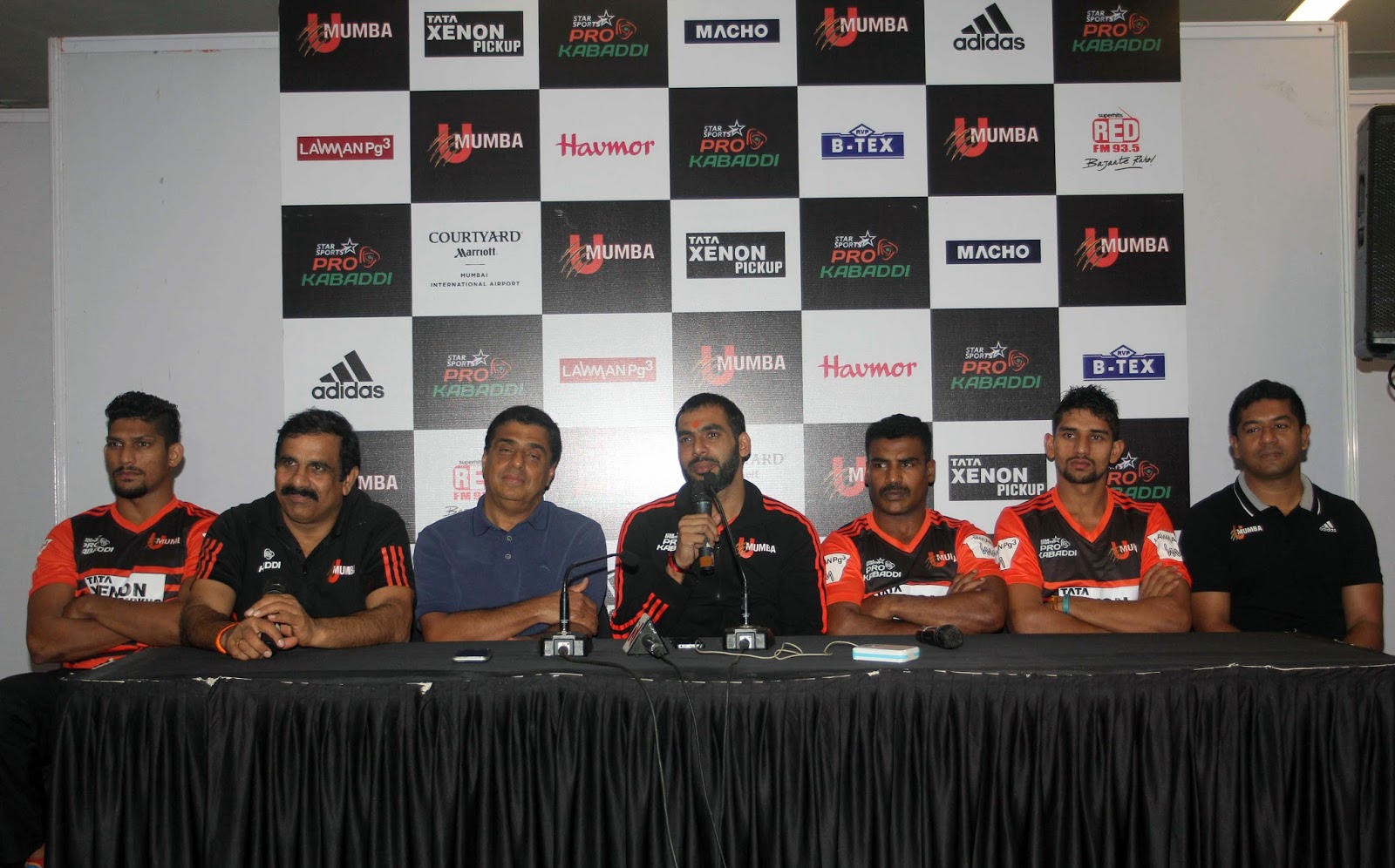 by Shrutee K/DNS
Mumbai: As U Mumba start their home leg for Season 4 of Star Sports Pro Kabaddi, the pressure on the team while apparent is not acknowledged. Addressing the press the day before the start of their home leg, Coach E Bhaskaran, a constant the last four seasons, admitted that the season had not panned out as planned and while disappointed in the performance to date, was first to recognize that the mistakes being made were rectifiable.
“I am not too delighted with the performance to date, because, the individual performance and the talent of each player has not translated into on-mat performances except for perhaps in two games. We have been making small mistakes, which have set us back, and we have been training day-in and day-out to avoid repeating those same mistakes. We have to win 3 of our 5 games remaining, but for me, the challenge is to win all 5 games – post those victories will I be able to breathe easy. We look forward to a successful home leg.” Started Coach E Bhaskaran. Adding to this, Supratik Sen, Co-Owner U Mumba said,“We have not done, what we have done in the previous seasons, but we know we are working towards our best”
Commenting on the season so far, Ronnie Screwvala, Co-Owner U Mumba opined, “I think Season 4 has really brought the game to very very high level for everyone. All 8 teams are playing extremely well and we have had different people come to the fore and you are seeing a lot of diversified talent and I think that is the best think that could happen to the game. I am not privy to the ratings, but what I have understood from Star, the opening week this season, the ratings have gone higher than the previous season, that means for the first time in sport for four consecutive seasons the ratings have gone up and up.” Before adding that there was no pressure on his team at their current position, sharing, “This is a sport, its not some competition, we are not fighting a war, and this is a sport.
We have good days and we have bad days, but our greatest sense of pride is that all three previous seasons, we have been to the finals and have won one. And the jury is still out on this season, I think no sport, can start or succeed under pressure. SO the message to our team is to go out there and play our best and of course Kabaddi is as much about playing our best as much as it is about strategy and modifying strategy to the game and end of the day we are not here to be stressed out to about the fact if we are going to be in the semi-finals or not, we are going to play each game against each team in the best possible manner under right guidance of the captain and the coach.”
Opening the leg is the famous Maharashtra Derby, an encounter that U Mumba had previously lost this season disappointingly with a large margin of defeat (41-19), a defeat from which U Mumba will have to regroup drastically before their first encounter at home. Captain Cool, Anup Kumar remained his stoic best sharing, “I never comment on a game either before the game or after. We have tried our best and I believe if you try as much as we did, you will succeed. We would look at making a fresh start and would look at a successful home leg.” Continuing on that the home support always makes a difference to their game, “This is our city and they come out to support us and that makes a huge difference. Last time we lost to Pune, was in the same stadium, yet the fans were backing us and this time we hope to return that favor.”

Local heartthrob, Rishank Devadiga though was quick to conclude that the pressure will never restrict the freedom and movement in their game, concluding, “There is obviously pressure.  We do not feel the pressure on the mat.”