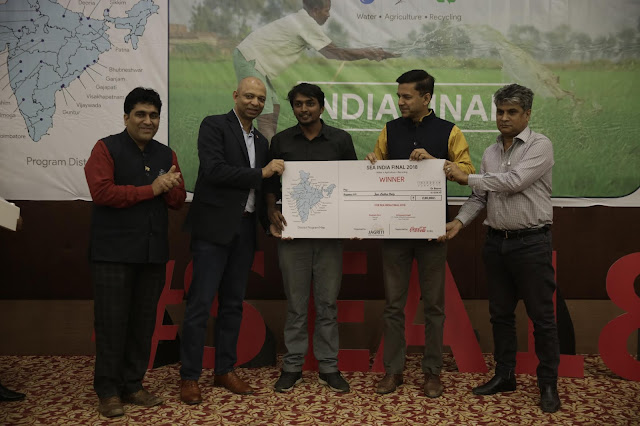 New Delhi, 19th December 2018: Coca-Cola India, one of the country’s leading beverage companies, in partnership with Jagriti Sewa Sansthan, a non-profit organization with the mission of building India through enterprise, today announced the winners of the ‘Sustainable Enterprise Awards 2018’ to recognize innovative sustainable entrepreneurial ideas in the fields of water, agriculture and recycling. The competition which took place over several months across 25 regions in India concluded with an award ceremony at Sydenham Institute of Management Studies, Research and Entrepreneurship Education, Mumbai. The jury for the finals consisted of eminent experts from the industry including Mr. Vikas Shah, Vice President, Strategic Alliances, NODD, Mr. Sushanto Mitra, CEO, Lead Angels, and Mr. Avinash Jogdand, ED, Ramiex Pvt. Ltd
Team Koyakal from Andhra Pradesh were announced the winners, Team NirNal from Karnataka the first runners-up and Team Incredible Kashmiri Crafts from Jammu and Kashmiri, the second runners-up.
“I would like to thank Jagriti Yatra and Coca-Cola India for the opportunity they have given me. I still remember during my journey last year on the Yatra, I could see the contrast between urban India and rural India in terms of ecosystem and economy. The exposure of two different regions helped me realize that an opportunity was there, which could bridge the gap. With this inspiration I started Koyakal, to empower the tribal and rural India,” said Govardhan Kunchapu, Founder, Koyakal.
Dr. Suyog Kumar Bhavare, Chief Operating Officer, Jagriti Yatra said, “Promoting sustainable agriculture, water conservation and waste management are some critical priorities we need to address today. The youth has the potential to collaborate towards building a better society and a clean and green environment. It has been encouraging to see the participation from budding entrepreneurs from smaller cities and towns, working towards sustainable development and upliftment of the country. We hope to continue to be catalysts in their success and thank Coca-Cola India for their continued support.”
Mr. Ishteyaque Amjad, Vice President, Public Affairs, Communications and Sustainability at Coca-Cola India & South West Asia added, “We are privileged to partner in this effort to spark off the entrepreneurial spirit among our young citizens. The youth are the change makers and this is a great platform for young entrepreneurs to come forward and contribute to developing sustainable communities. We have had a long association with Jagriti Yatra and we want to leverage this partnership to address sustainability challenges in water, agriculture and recycling.”
Besides monetary rewards, all members of the top three winning teams were awarded with a special waiver for the 11th Edition of the world’s longest train journey of entrepreneurs, Jagriti Yatra 2018-19. The teams will utilize their prize money to fund the implementation of the projects presented by them in the final rounds.
About Coca-Cola India
Coca-Cola in India is one of the country’s leading beverage companies, offering a range of healthy, safe, high quality, refreshing beverage options to consumers. Since its re-entry in 1993, the company has been refreshing consumers with its beverage products - Coca-Cola, Coca-Cola Zero, Diet Coke, Thums Up, Thums Up Charged, Fanta, Fanta Green Mango, Limca, Sprite, Sprite Zero, Maaza, VIO flavoured milk ‘Almond Delight’ and ‘Kesar Delight’, Minute Maid range of juices, FUZE tea, Georgia and Georgia gold range of hot and cold tea and coffee options, Aquarius, Schweppes, SmartWater, Kinley and Bonaqua packaged drinking water and Kinley Club Soda. The Company along with its owned bottling operation and other bottling partners, through a strong network of over 2.6 million retail outlets, touches the lives of millions of consumers, at a rate of more than 500 servings per second. Its brands are some of the most preferred and most sold beverages in the country – Thums Up and Sprite – being the top two selling sparkling beverages.
The Coca-Cola India system provides direct employment to 25,000 people and indirect employment to more than 150,000 people. The Coca-Cola system in India is contributing in its own small way to building sustainable communities through community initiatives like Support My School, VEER, Parivartan and Unnati and by reducing its own environmental footprint. For further information on the company's India operations and its products, please visit: www.coca-colaindia.com and www.hindustancoca-cola.com.
About Jagriti Yatra: Jagriti Yatra is an entrepreneurial annual train journey which started in the year 2008, with 500 brilliant young minds and today the Yatra family has reached the 4000+ milestone. It covers 8000 km and travels to 12 destinations in 15 days across the landscape of India. The Yatris, chosen after multi-level selection process, are introduced to extraordinary social and business innovators and entrepreneurs to get inspired. It starts on 24th of December from Mumbai and ends on 8th of January at Ahmadabad. The motto of Jagriti Yatra is “to Build India through Enterprise,” which is way forward for a nation like India, especially in the present economic climate.