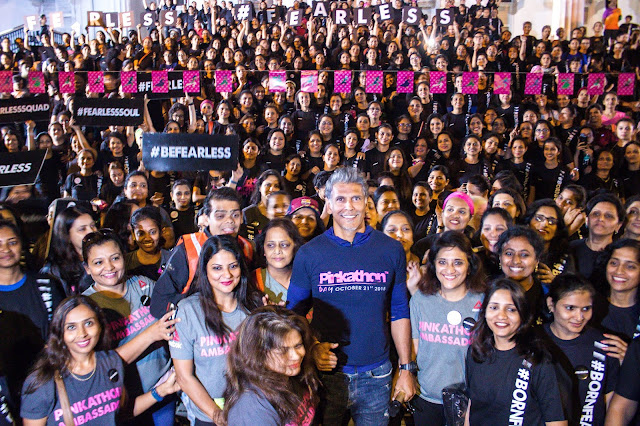 Mumbai: In 1966, James Brown sang “It’s a man’s man’s world”, and while the man was a lyrical genius, United Sisters Foundation organised the 5 kms Reebok Fearless! Run in association with Mumbai Police at the Asiatic Library, Horniman Circle, Mumbai to remind the world that it is no longer 1966, and we are here to inspire change. The REEBOK FEARLESS! RUN is a midnight run of 5kms and organised to make all public spaces equally accessible for everyone. The run is a symbol of reclamation, empowerment, and the start of a new movement. The purpose of the Fearless Run is twofold- to inspire a change of thought in every individual and the second to begin a cultural revolution. It was also organised to support and promote the seventh edition of Bajaj Electricals Mumbai Pinkathon 2018 presented by COLORS being held on Sunday, 16th December 2018 at MMRDA Ground, Next to One BKC Building, BKC. Online registrations are open onwww.pinkathon.in
One of the most common concerns women across the globe have while stepping out to run or exercise is safety. Over 500 women participated in the Second Edition of Reebok Fearless! Run to prove their solidarity and showcase their ‘fearless’ nature by running together at midnight. This was their way of reclaiming their space and owning the roads. The run demonstrated passion for a healthy lifestyle, love for freedom and respect towards one’s body. S.K. Jaiswal, Commissioner of Mumbai Police and Milind Soman flagged off the Reebok Fearless Midnight run at the stroke of midnight.
At the flag-off, Pinkathon Mentor Milind Soman highlighted the importance of being careful while being fearless and reaching out to support groups like the police, where required. He further said “We have organised the Reebok Fearless! Run for the second time in Mumbai. I am delighted with the overwhelming response from women and the support from Mumbai Police. Over 150 police were deployed to provide security and to ensure that the girls could run fearlessly. Ever since we have introduced this novel run for women, it has become the main highlight of Pinkathon. For too long women everywhere have been asked to conform to society’s narrow views of dos and don’ts, behaviour, dress and timing. Any woman seen out after a particular time is immediately judged and stereotyped. Sometimes they are punished. This happens in every village, every town, and every city. Women have an equal right to be where ever they want, at whatever time they choose to and however, they may choose to dress. FEARLESS is an endeavour to get women to make a strong statement about their right to reclaim spaces. Every woman who believes in herself, should celebrate that belief. FEARLESS is not a protest, it is a statement of fact, a call to solidarity. Women run, walk and celebrate themselves and reclaim the night in a strong statement of affirmation of who they are, and what they must do, to feel safe and secure. FEARLESS is the platform we have created for them to exercise this choice. It is important to be fearless but not careless. It doesn't matter whether you are running or walking during the day or night, what you are wearing, whether you are in India or abroad. Stay alert, be smart and don't let fear be a deterrent.”
Mr S. K. Jaiswal, IPS, Commissioner of Police, Mumbai said “Women are strong personalities and nothing should stop them from being where they want to be, wearing what they wish to wear and saying what needs to be said. It’s time for them to reclaim what is rightfully theirs; home, office and roads. We, police as well as citizens, need to change the pre-conceived notions and mindset. Mumbai Police will stand by every initiative that respects the prowess of women & reiterates the safety parameters of Mumbai.”
Every woman who becomes a part of the Reebok Fearless! Run, learns that all spaces are theirs to be claimed and it is time to forego the stereotype of a woman being confined to the indoors after dark. The Police are always there to protect us, but it is our duty as citizens to do everything we can to help them. As long as guidelines are followed and appropriate precautions are taken on a personal level, there are no spaces that cannot be explored, no avenue that cannot be touched, and no one that can be stopped from exercising their free will. With this step of the Reebok Fearless! Run, we hope that this picture of women standing their ground permeates through society and this restriction of not being allowed to move freely after midnight is quashed.