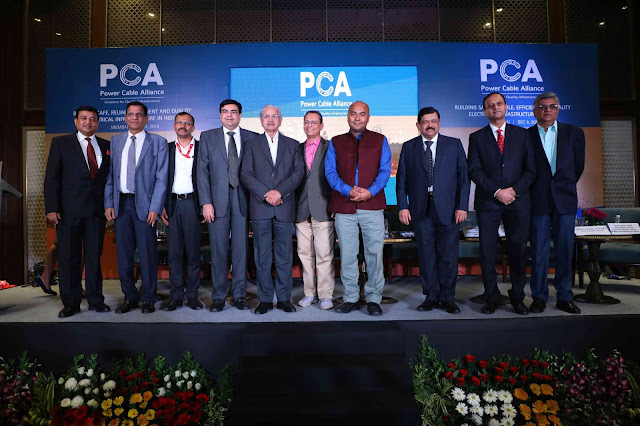 Two premier Copper Rod Manufacturers; Nine leading Power Cable Manufacturers from India and Middle East – all have come together to create Power Cable Alliance (PCA).
PCA, an association of Business entities, Consultants and individuals, shall work to promote quality Electrical Infrastructure.
PCA was launched in Mumbai on 4th December in august presence of Maharashtra State Industries Minister Mr. Subhash Desai.
PCA launch was attended by leaders of corporate India.
PCA launch was preceded by a panel discussion on need to create Safe, Reliable, Efficient & Quality Electrical Infrastructure.
Mumbai, December 05, 2018: India witnessed the start of a movement for quality infrastructure with the launch of Power Cable Alliance (PCA). Two Copper Rod Manufacturers, Eight Indian leading Power Cable manufacturers & One International Power Cable entity – have come together to form PCA. PCA is an association of organizations and individuals which will work together to push for the creation of safe, reliable and efficient electrical infrastructure in the country.
PCA was formally launched in Mumbai in august presence of Mr. Subhash Desai, Mining & Industries Minister, corporate leaders from across industries. PCA was launched with unveiling of Logo of PCA. www.copperformore.com
PCA Launch was preceded by a panel discussion on the theme - Building Safe, Reliable and Efficient Electrical Infrastructure in India. The panel discussion was moderated by leading Sr. Journalist. Panelists were from Fire Safety Officers Association, Tata Power, Adani Power, Mumbai Rail Vikas Corporation & Cable Manufacturers. Delegates in audience were drawn from Power Cable industry, Real Estate, Railways, Metro rail apart from fire safety champions, industry experts and academia.
Panel deliberated on the need and way forward for measures to make Electrical Infrastructure in India more safe, reliable & efficient. India is highly prone to electrical fires. According to the National Crime Records Bureau, a total of 113,961 people lost their lives due to fire accidents from 2010 to 2014. This is an average of 62 deaths a day. During these years, the number of deaths due to electric short circuit were about 7,743 or 7% of all the deaths. Discussion revolved around the need for electrical standards and global best practices for the development of Quality Electrical infrastructure in India to prevent electrical Fires.

Stressing on the need for a strong power infrastructure in the country, Mr. Subhash Desai, Mining & Industries Minister, Govt. of Maharashtra said, “I appreciate the initiative taken by the organizers. We, the government of Maharashtra are equally concerned about the issue of electrical safety and would be hosting a conference where government and private sector can get together to build a program and have a better control of the situation. I would like to invite all the key members of the industry present here to join us and enrich our deliberation.”
Speaking on the occasion, Mr. Sanjeev Ranjan, Spokesperson, Power Cable Alliance said, “India is the fastest growing major economy and its energy consumption is expected to double in the next six years. This makes it imperative for the country to develop quality electrical infrastructure which will support its growth for several years to come. The infrastructure that we create today should be safe, reliable and efficient so that Indian growth is unhindered.” He further added, “This is where Power Cable Alliance comes into picture, as a movement demanding the creation of such infrastructure. We are proud to present PCA as a voice for quality Electrical Infrastructure in India. PCA will work with policymakers, regulators industry, academia and civil society to push for safe, reliable and efficient electrical infrastructure.”
PCA’s movement for quality electrical infrastructure is in alignment with Government of India’s “Make in India” initiative. PCA is a firm believer that creation of reliable electrical infrastructure will spur manufacturing activity across the electrical equipment industry in India and will create viable jobs for millions of Indians.