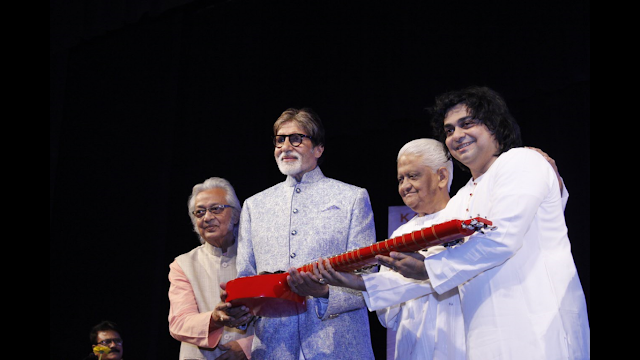 Regarded as one on the greatest gurus of Indian instrumental music, Pandit Kartick Kumar will be adding yet another coup to his long list of commendable credentials on the 82nd birthday of the virtuoso, a first of its kind Indian Music And Arts Culture Centre found its’ home in the cultural hub of Bandra West. The Pandit Kartick Kumar Foundation, situated at Rang Mandir Bandra was launched to promote Indian music and culture. To felicitate the living legend and honour his body of memorable work, the special guests for the inauguration included Amitabh Bachchan, Pyarelal Sharma, The Mayor Of Mumbai Vishwanath Mahadeshwar, President of Yuva Sena Aditya Thackeray and Bandra West MLA Adv Ashish Shelar.

The foundation was inaugurated with an all-day long music bonanza today at Sheila Gopal Raheja Auditorium. Patrons were privy to a stellar line-up with artists like Vishwamohan Bhatt, Mahesh Kale, Rahul Deshpande, Jayateerth Mevundi, Amaan Ali Bangash, Niladri Kumar, Vijay Ghate, Satyajit Talwalkar, Majusha Patil, Sheetal Kolwalkar, Atul Upadhye performing throughout the day. Pandit Kartick Kumar was also seen performing the Surbahar while his son Niladri Kumar performed a special set for Amitabh Bachchan. To inaugurate the foundation, instead of a traditional ribbon cutting, Mr. Bachchan, in the presence of all the special guests, played a few notes on the Zitar gifted to him by Niladri Kumar. 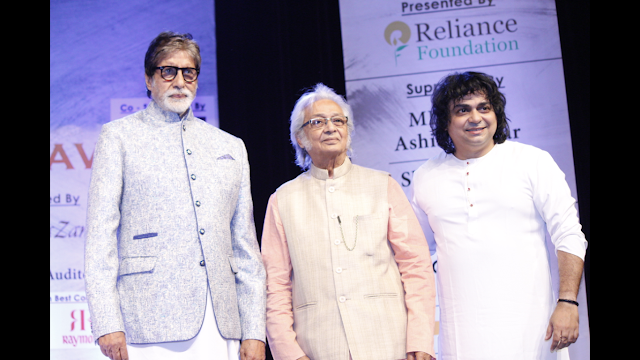 Amitabh Bachchan stated, " I am honoured to be be seated amongst such luminaries today. I had heard Niladri Kumar for the first time at an event where they were playing some ambient music through a CD. I was so mesmirised by that music I requested the person to tell me the name of the musician. He searched and then said it's 'some Niladri Kumar's. I thought to myself, what a fool this person must be to say some Niladri Kumar, he has no idea about this artist. An artist so unique and one of a kind, such humans are rarely created. After that I searched and bought all Niladri Kumar albums and CDs and till date everyday I listen to his music and it gives me so much calm, peace and joy. It has a become a part of my life. My father had once told me that when Lataji sings she is like a stream of honey, in perfect continuous melody and synergy. When I hear Niladriji, I remember exactly that what my father said.  Niladriji is that artist who's sound is so special , his music is so unique and he is in such perfect melody just like that stream of endless pure honey. "

Pandit Kartick Kumar stated, “The motto of this foundation is to serve through music. This is a premiere centre for all kinds of individuals from all backgrounds to come learn, understand and experience the joy of Indian music, instrument and vocal training through user friendly and interactive formats, fit for this generation. Music is an age-old science, which requires a lot of head and heart work. Every individual should be imparted with this gift. I have had the opportunity to perform and teach a large number of students throughout my life including my own son Niladri Kumar. He alongwith Padmashri Vijay Ghate were of the belief that they should create a learning hub with this vision of service and thus they requested me to helm this initiative. Life gives one a lot of things. But what music gives to life is something irreplaceable. I personally wanted people to feel the power of that. I feel Indian music and its’ study and interest should find a voice with the current and future generation. I am certain that with Niladri, Vijay and the dynamic team, people will get a correct avenue to come and learn from those who are in the path of music itself. From those who understand it right from its start to its endless journey and by those who have walked this path themselves. I believe, every person, if groomed well has the ability to learn and hone a talent that they themselves never thought they had. Learning is something lifelong. And this foundation is the place to keep learning, to keep growing and to keep the flame of music constantly alive”

Dhaka born Pandit Kartick Kumar is the son of Calcutta's well-known sitarist, Mangal Chandra Das. His first significant breakthrough in the world of music came in 1958, when he bagged the prestigious President's Gold Medal all India Award for sitar as a music competition held by AIR. Shortly after winning this title, he met Pandit Ravi Shankar and impressed by his virtuosity, creativity and passion, took him under his wing. Kumar then shifted to Mumbai and was training students at the Kinnara School. He was and still remains one of the most sought-after trainers. With Pandit Ravi Shankar, Kumar toured across the world, including with The Beatles. Kartick Kumar has lived an exemplary life and his body and contribution to music is unparalleled. An established concert performer, Kumar was also a music professor at Sion’s Shanmukhananda Fine Arts Sangeet Sabha for 30 years since 1974.