Atharva Foundation Announced the Season-2 of “One for all, All for one” to felicitate ‘Real unsung heroes’ 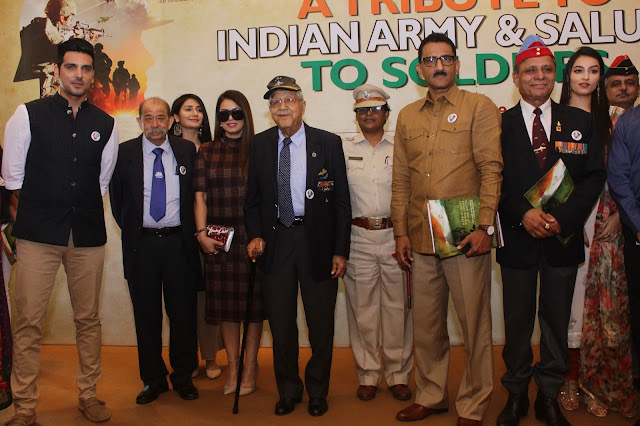 Atharva Foundation has announced 300 laptops distribution for Martyrs’ daughters
The Programme conceptualized by Shri. Sunil Rane, Chairman, Atharva Foundation
by Shrutee K/DNS
Mumbai 29th Nov 2018:  Last year Atharva foundation has honored the Indian soldiers by organizing one of the biggest and successful program named “ONE FOR ALL, ALL FOR ONE”. This year they are continuing this journey and coming up with season two of this event. Chairman of Atharva Foundation, Mr. Sunil Rane in Mumbai.  Atharva Foundation believes that the growth of a nation depends on the growth of the various sections of its society. This noble thought has led to flourish itself in every aspect. With the same vision, Atharva foundation has taken this step last year to recognize and felicitate Indian Army, Indian Air Force and Indian Navy, who are always ready to sacrifice their lives for the nation.
Last year, many renowned personalities have graced the occasion by their presence, such as, Hema Malini, Kapil Dev, Sangita Jindal, Aftab Shivdasani, Sonal Chauhan, Amisha Patel, Rohini Hattangadi, Vikram Gokhale, Neil Nitin Mukesh and Ajeenkya Patil.
“ONE FOR ALL, ALL FOR ONE”, is one-of-its-kind initiative envisaged and conceptualized by Shri. Sunil Rane, Chairman, Atharva Foundation. Last year, Atharva Foundation has felicitated the Indian Army, Indian Air Force and Indian Navy Soldiers and Martyrs by unfolding 10 martyrs’ stories of bravery and valour. In this season 2 of “One for all, all for one” initiative Atharva Foundation is going to spread the awareness regarding Indian Army, Indian Air Force and Indian Navy Forces by organizing many such programs and events throughout the year.  On every Sunday in the morning volunteers of Atharva Foundation will be doing awareness campaign for the program. At various colleges, awareness events are going to be conducted to motivate the youth to be patriotic and will be inviting them for the program. Atharva Foundation Volunteers are visiting Ganpati mandals, Socities, NGOs to spread the awareness about the program.
For the official announcement of the “One for all, all for one” Season-2 was addressed by the Chairman of Atharva Foundation, Shri Sunil Ranealong with many Bollywood celebrities such as, Ms. Mahima Chaudhary (Actress), Zayed Khan (Actor), Raza Murad (Actor), Ms. Archana Veda (Actress), Ms Monica Sharma (Actress) and Higher Military & MbPT dignitaries such as, Wing Commander Jag Mohan Nath (Bar to MVC) Shri. Sanjay Bhatia – Chairman Mumbai Port Trust, Brig. Vasant Patil, Col. C Ranade, Col. C.R. Deshpande, were the Guests of Honour on this occasion.  Convener of the event is Col. Sudhir Raje (Rtd) and Joint Conveners are Col. P. K. Kapoor (Rtd), Col. & Nandkumar Shauche (Rtd) 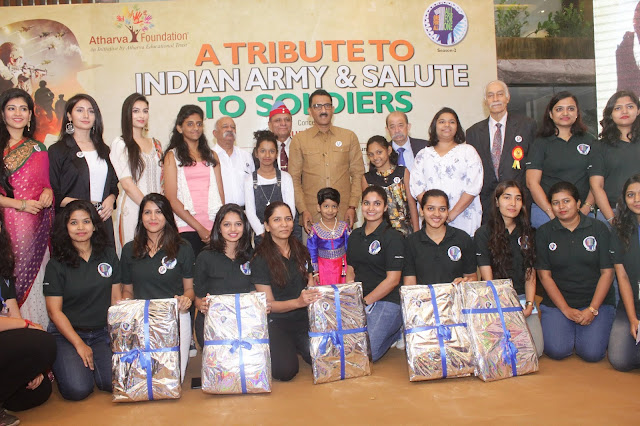 The season- 2 of “One for all, all for one” program is going to be held on 31st of January 2019 at the Dome, NSCI, Worli. The Guest of Honour of this program will be Shri Venkaia Naidu (Vice-President of India), Shri Nitin Gadkari (Hon. Union Minister of Road Transport & Highways and Shipping, Govt. Of India) and Shri Devendra Fadnavis (Hon. Chief Minister of Maharashtra). Laptop Distribution to the Martyrs' Daughters (Let’s educate the martyrs’ daughters with next generation technology).
Atharva Foundation has taken a noble initiative to distribute the Laptops to the daughters of martyrs of Indian Army, Indian Air Force and Indian Navy forces.  Atharva Foundation will contribute towards the education of our martyrs daughters and families. By the approval of Shri. Nitinji  Gadkari (Minister of Road Transport & Highways, Shipping, Govt. of India) and in coordination with Shri Sanjay Bhatia (Chairman, Mumbai Port Trust and Kandla Port Trust) Atharva Foundation  has received 100 Laptops from Mumbai Port Trust, 100 laptops from Jawaharlal Nehru Port Trust (JNPT)  and 100 Laptops from Kandla Port Trust  to provide online education to the daughters of the martyrs in various states of India. The list of the daughters has been prepared by Atharva Foundation in association with the District Sainik Board and State Sainik Welfare board of various states of India. Our mission is to develop, assist and enlighten the lives of martyr’s daughter with knowledge through technology and be the force of motivation for them to shine & educational project has been announced.
They have announced the distribution of total 300 laptops in “One for all, all for one” Season-2 event on 31st January, 2019, besides that, they have also distributed 5 laptops to the five daughters’ of martyrs in this press conference.
The Chairman of Atharva Foundation, Shri. Sunil Rane highlighted that the program ‘One For All, All For One’ is unique, as it not only creates awareness among the youth to be patriotic but also teaches the young generation to support the Indian Army, Indian Air Force and Indian Navy forces by knowing their heroic deeds for the country.