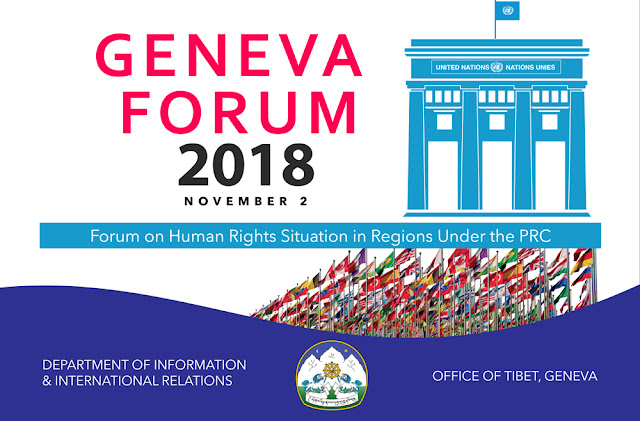 Mumbai, November 2, 2018: Four days ahead of China’s third cycle of Universal Periodic Review (UPR), the Department of Information and International Relations (DIIR), of Central Tibetan Administration (CTA) and Office of Tibet Geneva is jointly organizing a Forum titled “Geneva Forum-2018: Forum on Human Rights Situation in Regions under the PRC.”
The daylong Forum will bring together a select group of human rights experts, academics, diplomats, practitioners, advocates and activists on November 2, 2018,in Geneva. The Forum is expected to serve as a rallying point ahead of the UPR proceedings. China will be reviewed by UN member states on November 6 2018. “The UPR is a UN Human Rights Council mechanism to enable States to make comprehensive evaluations of the human rights situation in all UN states. The UPR is an important tool for civil society and governments to use to engage with China on  current human rights situations and therefore the Forum is a significant effort from DIIR and Office of Tibet, Geneva,” said Ngodup Dorjee, Representative of Office of Tibet Geneva.
Speaking about the dramatic deterioration of human rights in regions under the control of People’s Republic of China, DIIR Secretary Sonam Norbu Dagpo said that China has unleashed an increased assault on the fundamental human rights of the people under its rule, including human rights defenders who increasingly face arbitrary detention, imprisonment and torture.
“Since the last cycle UPR in 2013, China has failed to implement even the simplest of provisions to protect the rights of the people under its rule, including failing to implement accepted recommendations from both previous UPR cycles. The lack of joint action from governments has served to exacerbate the situation and the impunity under which the Chinese Communist Party (CCP) strips its citizens of universal human rights. Furthermore, China's tactics to silence criticism of its behavior have been even more aggressive in recent years,” explained Secretary Sonam Norbu Dagpo.
Lamenting the fact that successive United Nations High Commissioners for Human Rights have not been able to visit China and given the fact that since the last UPR only two UN Special Procedures mandate holders have been able to visit China, both of which were heavily restricted by the authorities and neither of which enabled a visit to Tibet, DIIR Secretary Dhardon Sharling said that a further 15 visit requests are pending, and without these expert visits it is extremely difficult to get an objective assessment of the  restrictions imposed by China on citizens under their rule, including government imposed restrictions on citizens in Tibet, East Turkestan (Ch: Xinjiang), and Southern Mongolia. “It is now crucial that UN Members States use the UPR to ensure China is strongly scrutinized in this 3rd-cycle UPR. To do this governments must include robust participation to address the alarming developments and trends that we see in regions under the PRC rule,” concluded Secretary Dhardon Sharling.
The Forum taking place in the lead up to UPR will deliberate on the human rights situation within the PRC, in particular in areas of freedoms (of thought and religion; opinion, expression and press; assembly and association; social, economic, cultural; language;) and surveillance, securitization, censorship, monitoring of online activity, while questioning the challenges to the UN Human Rights Institutions and Mechanisms in engaging with China. Outcomes from the Forum will include recommendations on how to best ensure China is made accountable under the UNHRC mechanisms and treaty bodies, thereby bringing about an redress of the rights violations prevalent in regions under the PRC rule.
Ms. Lisa Mazzone, Member of National Parliament, Switzerland will grace the opening session. CTA President Dr Lobsang Sangay, will deliver the keynote address at the Forum. A further 15 speakers (experts specializing on China, Tibet, East Turkestan (Ch: Xinjiang), Southern Mongolia and Hong Kong) will address three specific panel discussions; Human Rights Situation within the PRC under the CCP rule; Situation of Tibetans, Mongols, Uyghurs and the case of Hong Kong;  and Challenges to the UN Human Rights institutions in engaging with China. Tibetan filmmaker and activist Golog Jigme will share a witness account.
Further details of the Forum can be accessed here (https://solidaritywithtibet.org/genevaforum2018/)