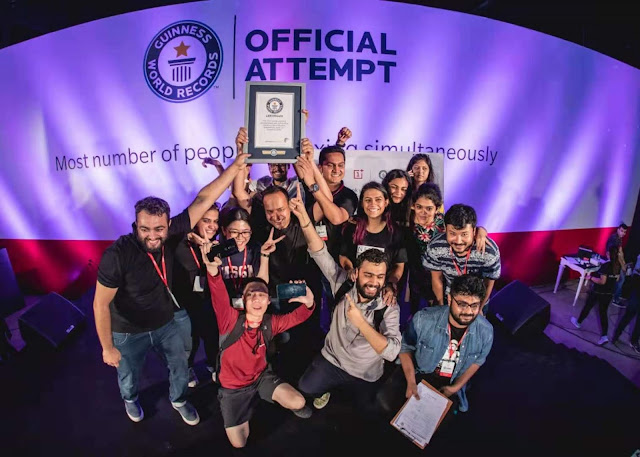 Aalong with Hundreds of Community members, OnePlus set a new GUINNESS WORLD RECORDS™ title for the Most people unboxing simultaneously

Mumbai, 2 November, 2018: In a mega-unboxing event, two days after the launch of its much-awaited flagship, the OnePlus 6T, the leading premium smartphone maker set a new GUINNESS WORLD RECORDS title for the Most people unboxing simultaneously. GUINNESS WORLD RECORDS, the global authority on record breaking, confirmed the record at 9:30 pm on 1st November, 2018 as 559 OnePlus community members came together to unbox and experience the OnePlus 6T simultaneously.

The record attempt began on Thursday, November 1 at 8.30 p.m. and the participants were among the first customers in India to get their hands on the OnePlus 6T within two days after the launch announcement in India, which was made possible by Amazon India’s Prime Now. Hundreds of OnePlus community members gathered at Richardson and Cruddas in Mumbai to unbox their OnePlus 6T devices and be the first to experience the new flagship in the country. This GUINNESS WORLD RECORDS feat brings to light the brand's ability to bring people together in unique ways. 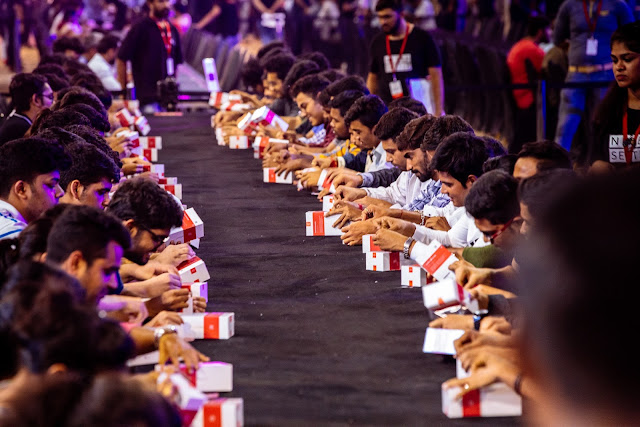 Speaking on the occasion, Vikas Agarwal, General Manager, OnePlus India, said, “At OnePlus, we are constantly working on creating a great user experience which goes beyond the device itself and the recent GUINNESS WORLD RECORDS attempt was one such endeavor. Unboxing a new phone is a very special occasion and for our latest flagship OnePlus 6T, it was truly a heartwarming moment to see hundreds of community members coming together to create history.”

“I was amazed with the kind of energy and enthusiasm that was exhibited by the OnePlus community and breaking of this record is a reinforcement of the brand’s popularity in India. This is another meaningful benchmark OnePlus has set for the industry, together with its loyal community,” said Rishi Nath, GUINNESS WORLD RECORDS Adjudicator. Apart from community members, the event was attended by presenter, fitness model and actress, Bani J and Indian lyricist, rap artist and music producer, Brodha V. The event was adjudicated in the presence of official GUINNESS WORLD RECORDS Adjudicator, Rishi Nath.

Prime Now customers were among the first in the country to get their hands on the OnePlus 6T. Prime Now is an app-only service with 2 hour ultra-fast delivery service of everything customers may want fast. These include best-selling smartphones along with Amazon Devices, a select range of consumer electronics, home & kitchen supplies, fruits & vegetables, grocery, staples, meats, and more. Prime Now is currently available in Bangalore, Mumbai, New Delhi and Hyderabad. 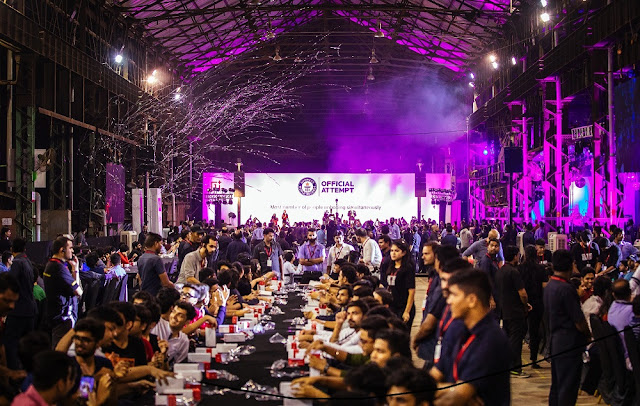 The OnePlus 6T is the company’s most futuristic flagship till date with Screen Unlock on the immersive 6.41-inch Optic AMOLED display, class-leading hardware and meticulous industrial design to create the industry’s fastest and smoothest smartphone experience. It features the latest, most powerful platform, Qualcomm Snapdragon 845, with up to 8GB of RAM that creates an experience that continues to set the standard for performance. Smart Boost, a new feature of the OnePlus 6T, improves app cold start speeds by up to 20 percent through storing data from frequently used apps in the phone’s RAM. The OnePlus 6T enhances the acclaimed camera experience of the OnePlus 6 with software optimizations and added features. The new Nightscape is perfect for capturing low-light urban environments with improved clarity, less noise, more accurate color reproduction and better dynamic range. Industry-leading HDR and portrait mode images are also improved, thanks to the clarity, dynamic range, and edge detection provided by OxygenOS. The OnePlus 6T will be available in Midnight Black and Mirror Black in three variants - 6/128 GB, 8/128 GB and 8/256 GB from November 1 on Amazon.in, oneplus.in, Croma stores and all OnePlus exclusive offline stores. The OnePlus 6T will retail at INR 37,999 for 6/128GB, INR 41,999 for 8/128GB and INR 45,999 for the 8/256GB variant.