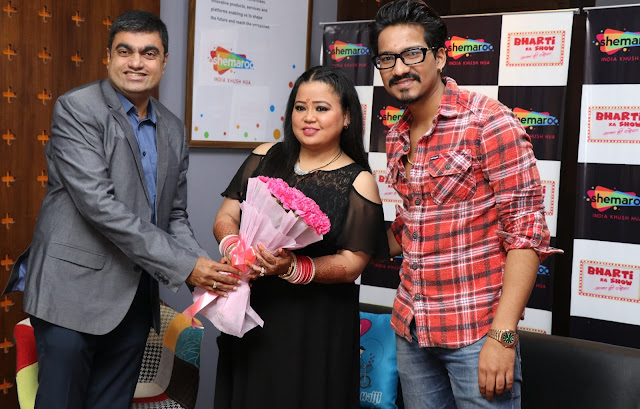 India’s newest roast show, “BHARTI KA SHOW - ANA HI PADEGA”, will see a host of TV celebs coming in and will be given various tasks to perform on the show by Bharti Singh. The show will start with a stand-up comedy segment by the host Bharti Singh herself and will end with the invited celeb getting roasted. The 13-episode series will see celebs like Krushna Abhishek, Sudesh Lehri, Karan Wahi, Ada Khan, Rithvik Dhanjani and many more taking the hot seat. A brand-new episode will be released every Saturday at 9pm and a repeat telecast will run on Sundays.

Excited about hosting the new show, Bharti Singh said, “After doing a lot of stand-up comedies and cracking many a jokes on people, I am very excited to have got an official platform to roast celebrities and comedians. I am truly obliged and thankful to one of the pioneers of the entertainment industry, Shemaroo Entertainment, for giving me such a platform for my brand-new show “Bharti ka show – Ana hi Padega.” This show being my first show after marriage is very close to my heart. My excitement levels are at the peak as this is something which I do off the camera, but now my fans will see me doing the same on camera.”

Talking on the launch, Hiren Gada, CEO, Shemaroo Entertainment commented, “The comedy genre is redefining a lot of media platforms in India. We are in exciting times and at Shemaroo we understand the pulse of our audience and provide 24/7 comedy services to our consumers sitting across the globe through our various platforms. Our association with Bharti Singh for the upcoming comedy show, Bharti Ka Show – Ana hi Padega, will surely take the viewers on a joy ride. I am sure this show will take the entertainment levels a notch higher.”

About Shemaroo
Shemaroo Entertainment Limited is a leading global content power house, which has played a pioneering role in the arena of content ownership, aggregation and distribution. Shemaroo has been a core part of the Bollywood Industry and has managed to maintain many relationships with the best production houses over the years. With a diverse and growing collection of over 3500 titles, Shemaroo has offered premium content and services to customers in more than 30 countries, across several Indian languages. With the brand in existence for over five decades, Shemaroo continues to redefine itself to respond to the disrupting consumer environment, by delivering content across age groups in genres such as movies, comedy, devotional and kids. The company’s innate ability to sense the pulse of what an audience will consume, has not only helped it become a trusted partner to few of the biggest media platforms such as YouTube, Hotstar, Star Gold, Zee Cinema, Vodafone, Reliance Jio, Tata Sky, Apple iTunes, Etisalat, but has also helped Shemaroo create entertainment experiences, in ways never thought of. Today, Shemaroo has evolved to be an entrenched player in the digital ecosystem. The entry into the Limca book of records with #FilmiGaaneAntakshri on Twitter is a proof of Shemaroo staying true to its ‘digital first’ vision.