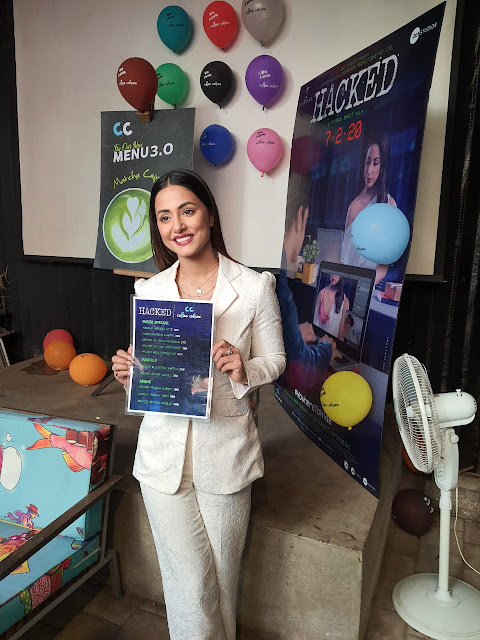 Mumbai:  Bollywood Actor Hina Khan visited the Coffee Culture Bandra on 7th of February 2020, for the promotions of her newly released movie ‘Hacked’. The meet and greet were organized by Coffee Culture associated as Hospitality and F&B partner with Zee Studios, one of the prime Indian Film Production and Distribution company By Zee Entertainment Enterprises.

The Coffee Culture Bandra Outlet was covered in crowd eagerly waiting for Hina Khan to arrive. As the actress reached the venue she was showered with flowers, gifts, tokens of love, selfies and autograph requests from her fans. After a short binge on Coffee and food, Hina Khan sat with the fans discussing her upcoming movie, journey, and personal choices. It was an evening filled with fans discovering conversations with their favorite actress over a cup of coffee.

During the meet and greet Hina Khan quoted ‘It is very difficult for us to pull in people to cinemas to watch a movie like ‘Hacked’ as people nowadays don’t want to indulge in movies that are heavy on emotions and depressing.‘Sareena’ the character I am playing in the movie challenges me since the subject is something I have never touched before. However, so far I have always tried to be experimental with my choices be it playing Akshara, Fear Factor, Big Boss, Komolika, Lines and now Hacked. With this film, if I'm able to give some strength to women out there, I will be more than happy’.

‘Hacked’ is a 2020 Indian Hindi-language psychological thriller film directed by Vikram Bhatt. The story revolves around a young boy’s (Rohan Shah) love for an older girl (Hina Khan), and how it turns into an obsession! Depicting the unflinching truth behind love and revenge in the age of social media, the movie portrays the realities of hacking in today’s time.

Coffee Culture in association with Zee Studios has curated a Hacked Special Menu in 22 CC Outlets spread across 18 cities in India. The menu comprises of Insta Special Hacked Matcha Latte, Matcha Frappe, Gold Cappuccino, Unicorn Cappuccino, Hacked Mexican Burger, sizzlers and more. Hacked special Blueberry Waffle and KitKat Waffle are loaded with sweetness to end your visit on a happy note.
Gaurav Narang, the founder of Coffee Culture shares “Associating with Zee Studios, one of the leading Indian film Production and Distribution company has been a moment of joy. Their upcoming movie ‘Hacked’ is based on love and revenge in the age of Social Media. And, so our menu captures the essence of social media and movies. The dishes are selected as per the modern taste, des
igned insta-friendly and kindles the charm of people of today.”

Ever since its emergence, Coffee Culture has been a hub for conversations, discussions, and expression of love for coffee. Crafting experience to brilliant brews and exquisite delicacies the brand has opened 22 outlets across 18 cities and is growing a strong network of coffee outlets.

##About Coffee Culture: Coffee Culture as the name suggests is more of a local community connect center. Creating elements of the local culture at every outlet and making people connect - the cafe unites the love for coffee as an integral part of our lifestyle. From Live Kitchen to brilliant brews - Coffee Culture is known for great food with good coffees and super cool ambiance connecting with the local culture. Focussed on spaces that suit the local audience, the cafe is crafting experience one outlet at a time! The brand has a network of 22 outlets across 18 major cities in India.
Website | Facebook | Instagram