Showing posts from 2012
Show All

- December 31, 2012
CORPORATE Chandni Textiles Engineering Industries to set up new velvet manufacturing plant Chandni Textiles Engineering Industries Ltd., a    leading textile machinery manufacturer of Two-for-One Twisting machines (TFO) under the brand name ‘Prerna’ since 1990s for    blue chip    textile mills like Raymonds,    Birla Group,    Bhilwara Group, Arvind Group, etc    has announced to BSE that    looking at the steady and growing demand for velvet fabrics, decided to set up a   world class in- house facilities for   velvet manufacturing plant with production upto 3 lac    mtrs p.a   in Ankleshwar, Gujarat and has decided to look out for Land with 10000 sq.ft. building either on outright or lease basis for the same. The Board also approved the import of Looms which have been sourced and the shipment is likely to take place in the month of January 2013.  Initially Chandni will be importing 20 used looms from Korea funded through own funds in the 1 st   phase with provision for expa
Post a Comment
Read more 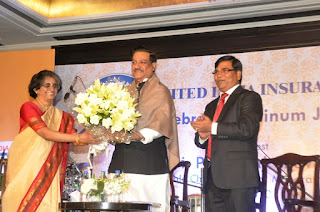 UNITED INDIA INSURANCE CELEBRATES PLATINUM JUBILEE IN MUMBAI United India Insurance Company Limited, a Public Sector General Insurance Company, is currently celebrating its Platinum Jubilee year.As a part of the celebrations, a function was held in Mumbai today which was graced by Shri Prithviraj Chavan, Honorable Chief Minister of Maharashtra, as the Chief Guest. It may be recalled that Shri Pranab Kumar Mukherjee, the then Finance Minister, Government of India, inaugurated the Platinum Jubilee celebrations at New Delhi on 18 th  February 2012. The Company during these 75 years successfully managed many game changing transformations in the Non-Life Insurance sector in India, in the form of nationalization, detarifficationof rates, migration from a subsidiary of GIC to a full-fledged Board-run Company and opening up of the sector to private players and the establishment of a regulatory architecture. Welcoming the august gathering of select Corporate cus
2 comments
Read more

HOSPITALITY/FOOD Bighdey Nawab Brings A Heritage Cuisine  Mumbai December 2012: In the mood for some Nawabi cuisine? Head to Bighdey Nawab  outlets that serve kind of food that Nawabs like to indulge in. Bighdey Nawab is an exclusive Indian quick service restaurant (QSR) showcasing delectable, heritage Lucknowi cuisine which has been brought together with a great deal of care and attention to the intricacies of balancing flavours. Bighdey Nawab is a well-known name when it comes to the best in delicious melt-in-the-mouth Kebabs, Biryanis, Rolls, Rotis and Naans. Bighdey Nawab solely focuses on delivering the latest in 'Awadhi' cuisine in the take away model. Cooked using handpicked and quality ingredients by trained chefs, Bighdey Nawab’s food are fast becoming legend amongst the ever enthusiastic foodies in India. Bighdey Nawab started off as an inspiration from  Mr Santosh Kulkarni , running a chain of Pan Asian restaurants in Dubai & Mumbai for 6
Post a Comment
Read more

EDUCATION/TELEVISION ZeeQ brings universe of Amar Chitra Katha on Indian Television Dec 28, 2012 ZeeQ, the first edutainment channel of India – in kids’ genre – launched by Zee  Entertainment Enterprises Ltd.(Zee) has acquired 26 episodes of Amar Chitra Katha (ACK) from Ideas Box Entertainment Pvt. Ltd. Ideas Box is an independent subsidiary of Amar Chitra Katha Pvt. Ltd. ZeeQ has plans to beam the 26 episodes of ACK, over 26 weeks, during November 2012 to April 2013. ACK was founded by Anant Pai, in 1967. In 20 Indian languages, it is the largest selling book series and hence is considered as one of the most favorite comic series of India. In a comic book format, it has captured the great Indian epics, mythology, history, folklore, and fables. Subhdarshi Tripathy, Business Head of ZeeQ says, “ZeeQ has acquired this property of ACK from Ideas Box for three years.” Ideas Box is a content, activation, education and television company which has conceptualized and pr
Post a Comment
Read more

TRAVEL/TOURISM  To reach out in 14 countries through a TV Show  Dec 28, 2012 Starting from this December, Maharashtra tourism will be on the international  platform with a TV show to reach out to 14 Asian countries. In an exclusive  tie-up Maharashtra Tourism Development Corporation (MTDC) has covered six major  unexplored tourist destinations from various parts of the State. The telecast partner, Discovery  TLC Channel, will telecast the episodes dedicated to Maharashtra from December  29, 2012 to international target audience under the title ‘Go Maharashtra’.  Dr. Jagdish Patil, Managing Director, MTDC,said, “Six episodes will explore the State’s inimitable and unexplored  attractions and will be based on the theme of promoting tourism treasures of  Maharashtra. These episodes will be telecasted on the TLC (Travel and Living)  feed and will reach the television sets of a diverse audience from across Indiaand 14 major Asian Countries.” The 22-minute show will be ai
1 comment
Read more

CORPORATE/MARKETING New Year bashes gear up on OOH media Dec 28, 2012 Mumbai: Despite the strong rumors of world coming to an end on 21  December, 2012, event organizers did not stop planning New Year party, pan India. Well nothing has happened. Therefore, to create buzz in the town for New Year party, event companies deployed large size hoardings across Mumbai. Bright creatives, bollywood stars, DJ music all relevant information have been put up on displays to increase the sale of passes. Sanjeev Gupta, Managing Director, Global Advertisers says “we have been approached by several event companies for the promotion of their new year party. We have executed an extensive OOH campaign for Essel world which has effectively increased their sales. Besides this, we have also received bookings from hotels, resorts, theme parks and lounges for their new year party celebration.” The campaign for the New Year party has been largely executed on hoardings and bus media. The med
Post a Comment
Read more

- December 28, 2012
CORPORATE BSE Institute Ltd offers Post Graduate Program in Global Finanial Markets Dec 28, 2012 BSE Institute Ltd, a wholly owned subsidiary of the BSE Ltd, has announced the commencement of a Post Graduate Program in Global Financial Markets (PGP-GFM). Spread across 4 semesters and comprising of 20 modules, PGP – GFM is a two year full time autonomous post graduate program. BSE Institute will conduct a written entrance test on 31st March 2013 in all the major metros across India for admissions. The program will help students learn fundamentals of the global financial markets by participating in various events thus will enrich their learning experience. There is a dearth of formally trained human resources in the BFSI sector, resulting in a growing skilled manpower shortfall that needs to be addressed on a war footing. With its glamorous reputation, high pay and potential for international travel, this sector exerts a magnetic attraction for high profile career aspir
1 comment
Read more

AVIATION Emirates offers attractive fares for ‘quick-acting’ customers Dec 26, 2012 New Delhi : Emirates, one of the world’s fastest-growing airlines, is welcoming  2013 aboard by offering very attractive fares for quick-acting customers. Whether your New Year’s resolution is to spend more time with family and friends or visit a dream destination, Emirates’ Economy Class deals, currently available for early bookers, offer something for everyone. The special fares apply to more than 120 destinations across the Emirates’ network when booked between 26th December, 2012 and 10th January, 2013 – for travel from 18th January to 10th June, 2013.* “With our excellent on-board products and a long list of exciting destinations – from Buenos Aires and San Francisco in the west to Tokyo and Auckland in the east – there are already many reasons to experience Emirates,” said Mr. Essa Sulaiman Ahmad, Vice President India & Nepal, Emirates Airline. “Now, we are injecting even
Post a Comment
Read more

CORPORATE The Original TBZ now in Bhavnagar Dec 27, 2012    (“TBZ”), a well-known and trusted jewellery retailer in India with a legacy of over 150 years, TBZ CMD Shrikant Zaveri inaugurates Bhavnagar showroom consolidated its presence in the Saurashtra region of Gujarat by opening the first store in Bhavnagar to cater to fast-growing local communities as well as the tourists and traders visiting various destinations in the region. The exquisite 2,500 sq. ft. showroom is located at “Krishna”, Waghawadi Road, Sahakari hut, Next to ‘Ghar shala’, Bhavnagar. TBZ also expanded its store network in Maharashtra by opening its first store at Vasai, near Mumbai on the same day. It was a dream come true for TBZ’s Chairman & MD Mr. Shrikant Zaveri, who inaugurated the new showroom! Incidentally, Mr. Zaveri has strong historical roots and familial ties in the Saurashtra region. It was a truly momentous occasion for the ‘son of the soil’, who always looked forward to come b
Post a Comment
Read more

CULTURE/ENVIRONMENT Yamun a Bacha vo Aando lan Where is Yamuna? make free yamuna from Hathini Kund Barage Peacemarch on 1st March from Vrindavan to Delhi Ramleela Maidan You will be surprised to know that Yamuna River is not added water in Triveni Sangam at Allahabad for Kumbhmela. Reason is that original Yamuna's flow is stop at Hathini Kund Barage Haryana. About 75 % water divereted to Haryanan through western Yamuna canal. Only 12 % water flows in Yumana through Eastern Yumuna canal towards UP. To make Yamuna's water flow to Gokul, Mathura & Vridavan & for awarness in public on 1st March 2013 Lacs of public along with all Saint, NGO & others take March Ramleela Madin Delhi from Vridavan. Barsans Shri Rameshbaba & Vaishnav Acharya Shri Pankajbava (Gukal) with Iscon Tempal will take lead for this project. Hathini Kund barage to wazirabad barage appx. 200 KM of Yamuna is totally dry accept in monsoon. Here all land mafiya
Post a Comment
Read more