Showing posts from January, 2020
Show All

- January 31, 2020
by Shrutee K/DNS  Navi Mumbai:  Nexus Malls,  has always been the forefront of partnerships & association which make a social impact. This time around, Nexus malls has j oined hands with Maharashtra Road Safety Cell & WERIDE, a group of passionate bikers who have a national presence for a nationwide campaign on road safety awareness in India. The campaign aims to bring down road accidents and fatalities by making bikers aware of the need to pay heed to traffic rules and regulations as well as the importance of road etiquette and behaviour. Under this campaign, a group of riders from Cruise India will travel across the states of Maharashtra, Rajasthan, Gujarat, Uttar Pradesh, Madhya Pradesh and Delhi, to spread the road safety message in schools and colleges, shopping malls, and at street corners. The bikers, along with local riders, will also participate in road safety rallies in Pune, Mumbai, Ahmedabad, Jaipur, Indore and New Delhi. The campaign will be launched from
3 comments
Read more

by Shrutee K/DNS Bengaluru,  January 2020:  To elevate the spirit of love this Valentine’s Day, Forevermark, a diamond brand from De Beers Group in association with Joyalukkas, is all set to launch its new ‘Hearts of Joy’ collection of charming heart shaped modern jewellery. The beautiful collection includes an array of options, such as Mangalsutras, that depict a mark of love and commitment, rings that portray a promise of forever, pendants that act as a perfect gift and bracelets that you can’t help but pamper yourself with. Every design in this collection is constructed around the concept of love and is illustrated in a heart shaped design that will be available at the perfect time, just before Valentine’s day.  While talking about the collection , Mr. Joy Alukkas, CMD Joyalukkas Group  said,  “With the onset of the season of love, we are delighted to announce the launch of the ‘Hearts of Joy’ collection with Forevermark. Through this collection, we are excited to s
3 comments
Read more

- January 30, 2020
by Shrutee K/DNS Mumbai, India:   Cactus Communications, a global scientific communications company, announced that it has acquired UNSILO, a Denmark-based Artificial Intelligence (AI) and Natural Language Processing (NLP) company that specializes in text analytics, linguistics, and data science. UNSILO, co-founded by Mads Rydahl and Thomas Laursen, provides AI tools and solutions for publishers to grow their business and improve customer experience through products such as  Classify  which helps publishers package and sell content in new ways,  Recommend  which supports the discovery of new and existing research, and  Evaluate  which helps scale up the capacity of the journal editorial office. It has partnered with STM industry leaders like BMJ, Wiley, Clarivate Analytics, and Taylor & Francis to develop solutions for the publishing ecosystem. Co-founder Mads Rydahl headed product design at Siri before it was acquired by Apple. Thomas Laursen, Co-founder and CEO of UNSILO,
3 comments
Read more 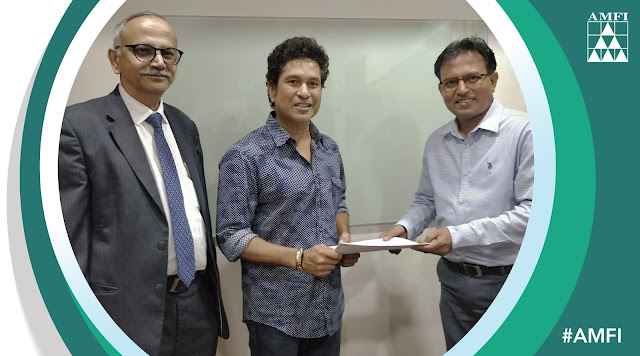 by Shrutee K/DNS New Delhi, January 30, 2020 : AMFI, announced that it had signed cricketing icons, Mr Sachin Tendulkar and Mr. M S Dhoni for their 'Mutual Funds Sahi Hai' campaign, to help create awareness about Mutual Funds, as the preferred investment option.   Speaking on the occasion, Mr. Nilesh Shah, Chairman, AMFI said: ''Mr. Sachin Tendulkar and Mr. M S Dhoni evoke unstinted trust and high dependability, and their longer-term orientation in their respective cricketing careers, has been akin to retail investors having equally longer term approach towards investment. Longer term approach be it, in cricketing career or in Mutual Fund investments can deliver rich dividends be it for cricketers or investors, alike." Mr. N S Venkatesh, Chief Executive, AMFI added: "After three years of Mutual Funds Sahi Hai campaign, we at AMFI felt that the time is right to take the  conversation with the retail investors across the country to the next leve
3 comments
Read more

The weeklong festival kickstarts from January 31st in select theatres pan-India New Delhi, 30 th  January 2020 :  Cinépolis ,  India’s 1 st  international and the world’s 2 nd  largest movie theatre circuit, will be dedicating a week to honor major Oscar-nominees with a specially curated film festival. Scheduled from January 31 st  to February 6 th , the Oscar Film Festival offers a unique opportunity for cinema lovers to witness their favorite Oscar awarded movies come alive on the big screen. The Festival will be celebrated in major Cinépolis theatres in  Bangalore, Pune, Delhi, Mumbai, Kolkata, Hyderabad, Guwahati, Jaipur, Noida, Lucknow, Vadodara, Ahmedabad, Thane and Bhubaneshwar. Movie buffs are in for a treat as Cinépolis gears up with its special technology and effects to bring this year’s Oscar nominees come alive on its screens. The festival will include screening of the best Hollywood nominations for the year, including  Ford v Ferrari  (garnered the prestigious Be
2 comments
Read more

- January 30, 2020
by Shrutee K/DNS  “Overview by JLL” is expected to benefit 60,000 residents across 80+ residential societies Mumbai, January 30, 2020  – JLL today announced the official launch of its first property  management   mobile application 'Overview by JLL' for residential societies. The app automates daily chores and streamlines some of the key concerns at residential societies such as visitor management, billing and payment, and facility booking etc. This, in turn, elevates the overall experience for residents staying at a property managed by JLL. The real-estate sector has been leveraging technology across segments and JLL has been at the forefront of many such innovations to create efficient processes, implement infrastructure changes, integrating technology that prepares business for the future. Overview by JLL is expected to be rolled out for more than 80 JLL managed residential societies in India by the end of 2020, with more than expected 60,000 residents using the ap
2 comments
Read more

The Singing Violin of India Kala Ramnath and Indian percussionist

- January 30, 2020
by Shrutee K/DNS   Sivamani mesmerize the audience with their maiden performance together at Siddhivinayak Temple’s Maghi Mahotsav The thousands of devotees who visited Siddhivinayal Temple’s Maghi Mahotsav were left spell bound with the first musical performance of duo Kala Ramnath and Sivamani. Ganesh Jayanti also known as Maghi Ganeshotsav is an auspicious day dedicated to Lord Ganesha is celebrated every year with great excitement at the Siddhivinayak Temple. To add to the auspicious celebration , Kala Ramnath and Sivamani came together and performed for the audience. The jugalbandi between the two created magic and the whole place was mesmerized in the beautiful vibe and music created by both. Speaking at the occasion, Kala Ramnath said, “It is a pleasure for me to perform with Sivamani anna. He has time and again reinvented himself . He knows how to connect with audience across ages and genres and for a musician. I am here today , thanks to my beautiful audience and the
2 comments
Read more

by Shrutee K/DNS January 30, 2020,  Mumbai /Bhopal:  With a noticeable spurt in shooting of films and TV projects in Madhya Pradesh, the state is set to emerge as a major film shoot destination in 2020. Aptly described as the “heart” of Incredible India, the state of Madhya Pradesh offers a host of attractive locations that have lured film producers of all genres, down the line. As the State has become a regular visiting point for Bollywood industry, Madhya Pradesh Tourism has decided to promote film tourism of the State. More than 200 projects including Hollywood Projects like “The Bear” by Paramount Pictures, “A Suitable Boy” by BBC Production, White Tiger etc. and many Indian feature films, TV Serial/Series, TVCs & Reality shows have been shot in Madhya Pradesh till now. Some of the recent being Panga, Stree, Sui-Dhaga, Kalank, Manikarnika, Luka Chuppi, Padman, Toilet ek Prem Katha, Mohenjo Daro, Bajirao Mastani , Moti Choor Chakna Choor,  apart from these several Web Se
2 comments
Read more 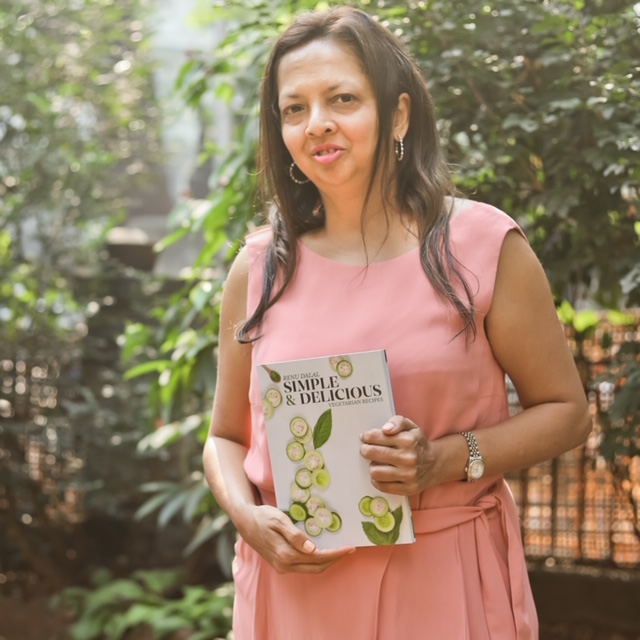 by Shrutee K/DNS Mumbai, January 30, 2020 : Renu Dalal, daughter of renowned chef, cookbook author, and television presenter Tarala Dalal, launched her second cookbook – Simple & Delicious Vegetarian Recipes – at Mumbai’s Crossword Bookstores, Kemps Corner, on the 22nd of January. This cookbook follows in the wake of her maiden best-seller, Modern Vegetarian Recipes. Inspired by the overwhelmingly positive reception that greeted the release of her first book, and with many more recipes to share, Renu set about penning her second book. With stunning food photography and many recipes that are quick, simple, and easy-to-follow, Simple & Delicious Recipes is a glimpse into the foods and flavours that excite Renu on a daily basis. The recipes contained in this book were gathered by Renuand chosen for their inventiveness, healthiness, and simplicity. With new and exciting dishes like rose shrikhand, no bake Oreo tarts, and black rice and asparagus samosas with chess sauce,
2 comments
Read more 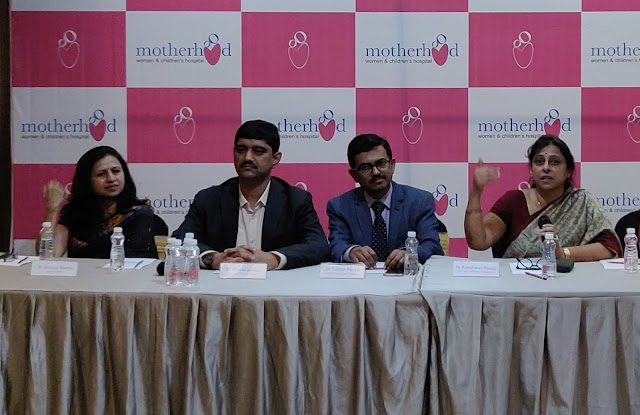 by Shrutee K/DNS Pune : A team of Paediatric Surgeons at Motherhood Hospitals Kharadi successfully operated upon a 1-day-old baby. Baby Ruchika (name changed for confidential purposes) was born with a congenital defect, wherein there were fluid filled cysts being formed in the lung cavity. It was a delicate and critical condition wherein the survival and later the prognosis of the baby could have been compromised. The doctors at the hospital helped a new-born baby girl breathe freely by initially removing fluid from the cyst that was present in her left lung by aspiration process and later performing a lung lobectomy (surgery to remove one of the lobes of the lung) immediately 1 day after birth. The baby is now home and doing well. Dr Rajeshwari Pawar, Gynaecologist -Obstetrician, Motherhood Hospital Kharadi, Pune highlighted, “The foetus was diagnosed to have a type 1 Congenital Cystic Adenomatoid Malformation (CCAM), and it is a developmental defect where there is a beni
3 comments
Read more 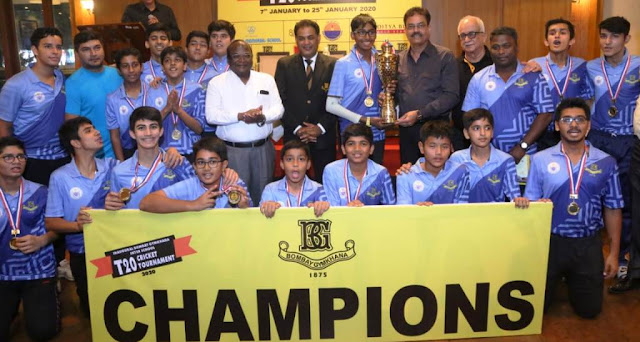 by Shrutee K/DNS Mumbai:  St. Mary’s ICSE (Mazagon) lads strolled to a comfortable 7-wicket victory against Dhirubhai Ambani International School (BKC) and emerged champions of the inaugural Bombay Gymkhana Inter-School T20 Cricket Tournament, played under floodlights at the Gymkhana’s ground. Batting first, Dhirubhai Ambani batsmen were unable to score runs freely and were restricted to a modest total of 90 for the loss of eight wickets in their quota of 20 overs. Abhiviraj Goel was the leading scorer with 25 runs from 44 balls, while Taher Kudrati, who had a great tournament, could score only 15 runs from 28 balls. St. Mary’s bowler Raahib Fatehi picked up 2 wickets for 10 runs. In reply, St. Mary's School easily chased down the target scoring 91 for the loss of only three wickets in just 14.2 overs. Aran Giridhar, who was the only batsman to score a century, scored a quick 26 runs from 21 balls, Raadnya Apte made an unbeaten 23 from an even number of balls faced and Mi
3 comments
Read more

Leading escalator and elevator brand Schindler India was honoured at Realty Plus ‘Interior & Exterior’ (INEX) 2020 with “Brand of the Year” and “Innovative Product of the Year” Awards in Mumbai  Mumbai:  A pioneer in bringing new and innovative offerings to the elevator and escalator industry,  Schindler India , a 100% owned subsidiary of Schindler Group has bagged one of the prominent awards of the year- “ Brand Of The Year ” at the ‘Interior & Exterior’ (INEX) Awards 2020 that was organized by  Realty Plus , held in Mumbai, January 2020. Adding on to its recognition, Schindler India was also presented with the  “Innovative Product of the Year”  Award for their DOOH services under Schindler’s Digital Business -  the new advertisement and information solution for the elevators and escalators. Schindler India  is one of the leading brands in the escalator and elevator industry. Its innovative and environmentally-friendly access and transit-management systems make a
2 comments
Read more
More posts