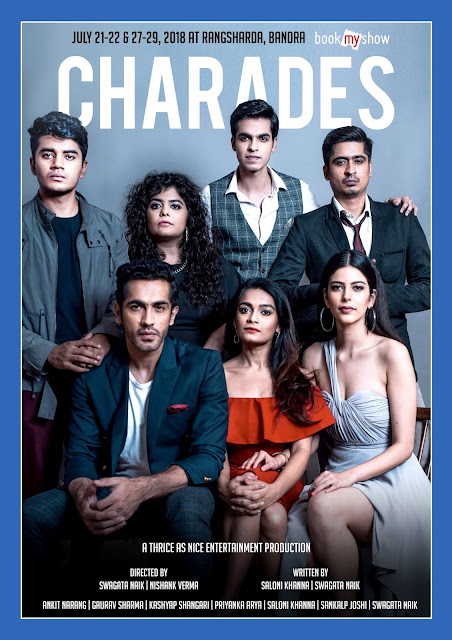 Set in a plush South Bombay household, Swagata Naik’s Charades revolves around the lives of 7 young adults and the secrets that their cellphones bring with them. Charades brings with it a powerful message that how this modern device, originally created to make our lives easier, has actually emerged as a ransom device and hoards every individual’s secrets. The play also explores the themes of modern gender roles, class and profession related stereotypes, insecurities and distrust in urban relationships, and sexual fluidity. The play is written, produced & Directed by Swagata Naik under Thrice As Nice Entertainment, where she also plays the role of Naina Kapoor, a dissatisfied and an ambitious lawyer.

As an independent female actor/ writer/ producer/director, Swagata’s aim was to contribute towards changing perceptions and breaking stereotypes. For example, in Charades, she has challenged the stereotype that glamour and intelligence do not go hand in hand. She has showcased 3 glamourous women who also bring with them powerful careers and family lives. Similarly, production wise she wishes to push the envelope with respect to theatre.

Since a plush SOBO household brings an element of class and edge with it, she has paid special attention to the set design, customised music, lighting and costumes. Every character has a look curated by Marvin D’Souza, which reflects their personality and people we have met or aspire to be like. The play aims to create a ‘Live Cinema’ experience for the audience.

The play is a psychological drama and is designed to make the audience think about that omnipresent virtual world and their own charades. The show’s opening Night is scheduled for July 21, 2018, 8pm @ Rangasharda, Mumbai.