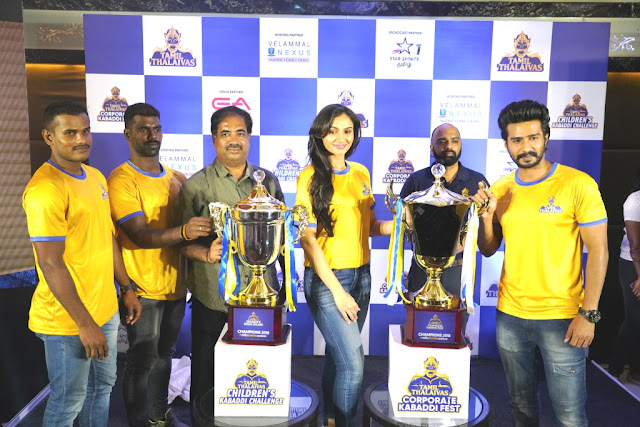 Chennai: IdhuNammaAatam(This Is Our Sport) is Tamil Thalaivas’ new expression for Kabaddi. The Tamil Nadu franchise of Vivo Pro Kabaddi League is all set to build and spread local love for the sport across the state through its year-round initiatives. The newest entrant in the league has already built a strong affinity in the state and will host a slew of on-ground properties in its second year of operations with a goal to further the southern state’s rich Kabaddi legacy.
Elaborating on the team’s mission, Viren D’ Silva, CEO, Tamil Thalaivas stated, “Tamil Nadu is proud of its Kabaddi heritage and, at Tamil Thalaivas, we aim to connect every Tamilian with their favorite sport of Kabaddi all through the year. We have lined up a number of exciting initiatives, which we will build year on year. We want to give back to the fans and communities who have given us so much love. Through these initiatives, we are inviting Tamil Nadu to be a part of every moment both on and off the mat because, in the end, IdhuNammaAatam - Then, now and, forever.”
The annual Kabaddi excitement starts with The Tamil Thalaivas Corporate Kabaddi Fest, which will be held at the Express Avenue Mall in Chennai on August 17-19. 32 corporate houses including TCS, IBM, Renault, Cognizant, Apollo Tyres, Aradhaya Gold, Cocal Cola, Ford Motors, HDFC Bank and more will field amateur corporate Women’s and Men’s teams. The Corporate Kabaddi Fest will also feature Tamil Movie Stars, Vishnu Vishal and Andrea Jeremiah who, as “Chief Motivating Officers”, will be cheering for the corporate teams. In a first, Tamil Thalaivas will also provide professional-level training to registered corporate teams in the two weekends preceding to the event.
A Star India spokesperson said, "Tamil Nadu has a rich sporting culture, that underpins the popularity of various sporting leagues including TNPL, VIVO Pro Kabaddi League, IPL 2018, Hero ISL among others. Since Tamil Thalaivas was first introduced in Season 5 of VIVO Pro Kabaddi League, they have charted various initiatives such as the grassroots programme to build deeper affinity for the sport across the state. As the official broadcaster, we endeavor to bring alive truly inspiring and engaging stories from their initiative, Corporate Kabaddi Fest, which will be a part of the run-up to a bigger, more exciting new season 6"
Talking about his new role, Vishnu Vishal, said, “Being a sports fanatic and having made my debut in a movie based on the sport of Kabaddi, I am delighted to be a part of this unique initiative that will build participation & fans for the state sport of Kabaddi.”
Andrea Jeremiah, rooting for Women’s team in The Tamil Thalaivas Corporate Kabaddi Fest, said, “It is heartening to see the response the sport has received from Women all across. I am excited and happy to cheer for them. IdhuNammaAatam too, from one women to another.”
The Tamil Thalaivas Corporate Kabaddi Fest has Star Sports Tamil as its official broadcaster and will have 7 one-hour features on the channel.
Children’s Kabaddi Challenge, running from August through September, will reach out to 1 lakh students across 8 cities including Chennai, Madurai, Coimbatore, Salem, Thiruvallur, Thanjavur, Tirunelveli, Pondicherry. 196 schools are already on board for the city events with 12 Girls and 12 Boys teams playing in a knock-out format.The top 30 teams will then be invited to Chennai to take part in the State finals event to be held in early September.
The Tamil Thalaivas’ Kabaddi caravan will continue with Street Kabaddi and Tamil Thalaivas State Tour in the coming months.  info@tamilthalaivas.net.in