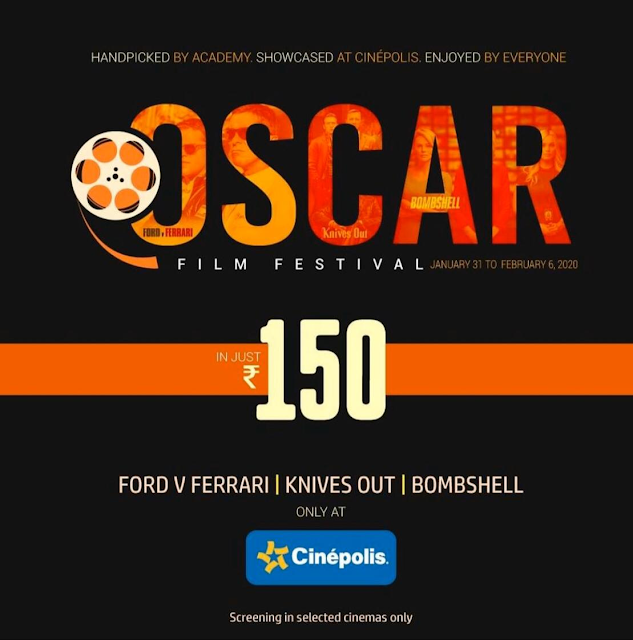 The weeklong festival kickstarts from January 31st in select theatres pan-India
New Delhi, 30th January 2020: Cinépolis, India’s 1st international and the world’s 2nd largest movie theatre circuit, will be dedicating a week to honor major Oscar-nominees with a specially curated film festival. Scheduled from January 31st to February 6th, the Oscar Film Festival offers a unique opportunity for cinema lovers to witness their favorite Oscar awarded movies come alive on the big screen. The Festival will be celebrated in major Cinépolis theatres in Bangalore, Pune, Delhi, Mumbai, Kolkata, Hyderabad, Guwahati, Jaipur, Noida, Lucknow, Vadodara, Ahmedabad, Thane and Bhubaneshwar.
Movie buffs are in for a treat as Cinépolis gears up with its special technology and effects to bring this year’s Oscar nominees come alive on its screens. The festival will include screening of the best Hollywood nominations for the year, including Ford v Ferrari (garnered the prestigious Best Picture nomination), Bombshell (2 nominations - Best Actress for Charlize Theron and best supporting actress for Margot Robbie) and Knives Out (nomination for Best Original Screenplay), besides 1917, Jojo Rabbit and Parasite.
Speaking on the occasion, Mr. Devang Sampat, CEO, Cinépolis India commented, “We are delighted to announce a week of celebration for movie patrons in India. The remarkable works of art, that have garnered major nominations for the very coveted Oscars 2020 deserve an extraordinary showcase, and we are proud to host these films in our world class multiplexes. With such exclusive offerings, we try to stay true to our brand’s commitment of providing the same world class cinema viewing experience to our discerning patrons across India.”
Further details on the festival are available on the Cinépolis official website, Instagram and Facebook pages.
About Cinépolis India: Cinépolis India is a wholly owned subsidiary of Cinépolis and is the 1st international exhibitor in India. The company currently operates 390 screens under the brand names of Cinépolis, Cinépolis VIP, and Fun Cinemas. Cinépolis operates India’s biggest Megaplex – 15 Screen Multiplex in Pune and has brought innovative concepts to exhibition Industry in India. Cinépolis also offers multi-benefit loyalty program- ‘Club Cinépolis’, to enhance customer experience and increase loyalty. Club Cinépolis offers free registration, earning and burning of points, invite to pre-screening of movies and star visits. Cinépolis India has been awarded with “Most Admired Retail Launch” in 2010, “Most Admired Retailer – Innovation” in 2011, “Fastest Growing Multiplex Chain” in 2015, “IMAGES Most Admired Retailer – Entertainment” in 2015, “DLP CineAsia Marketing Achievement Award” in 2015, ‘Best Marketing Campaign of the Year’ award at the Making of Developed India awards 2017.  In 2018 Cinépolis has been awarded with ‘Best Multiplex – West’, ‘Best Multiplex – South’ and ‘Fastest Growing Chain’ at the Global awards for Retail Excellence. In 2018, Cinépolis India has been awarded with “Most Trusted Brand of the Year” at Big Cine Expo 2018 and Images Most Admired Retailer – Entertainment at Indian Retail Forum 2018. In 2019, Cinépolis India was awarded the ‘Most Admired Omnichannel Retailer of the Year’ at the MAPIC India Retail Tech Awards.
About Cinépolis: Cinépolis was founded in Mexico in the city of Morelia, Michoacán in 1971. Today it has positioned itself as the world’s 2nd largest movie theater circuit in attendance, operating 884 cinema complexes, 6593 screens and over 1.2M seats across 18 countries worldwide. Today, it has reached a count of 6000 theatres all around the world. It was the first cinema exhibitor in the world to pioneer the concept of luxury movie theatres, establishing the first luxury theatre experience in 1999 in Mexico City. Cinépolis aspires to provide its guests with the best overall experience in film entertainment and employs a global workforce of more than 39,370 people to support its mission. Cinépolis plans to continue to revolutionize the industry for years to come.