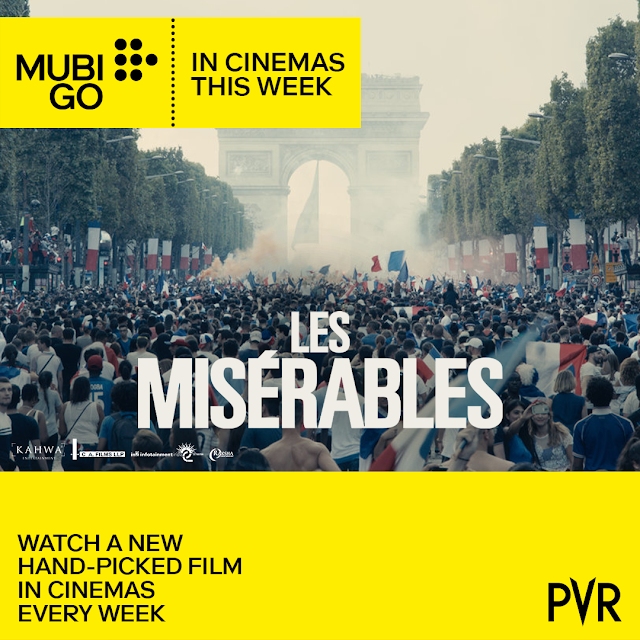 by Shrutee K/DNS
Mumbai:  Curated streaming service MUBI has announced that its MUBI GO film of the week, starting March 13, is the award-winning LES MISÉRABLES.
Directed by Ladj Ly (THE PITIFUL, GO FAST CONNEXION), the film won the Jury Prize at Cannes Film Festival 2019, and was nominated for the Academy Award for Best International Feature Film 2020. The film is inspired by the 2005 Paris riots and stars Damien Bonnard (DUNKIRK, STAYING VERTICAL) and Alexis Manenti (THE LAST PANTHERS), Djibril Zonga (C’EST TOUT POUR MOI), and Issa Perica (QUOTIDIEN).
As a provocative insight into the tensions between neighborhood residents and police, the film tells the story of Stéphane (Damien Bonnard) joining the Anti-Crime Squad in Montfermeil, Paris, where, Victor Hugo set his famed novel Les Miserables. Alongside his new colleagues, Chris (Alexis Manenti) and Gwada (Djebril Zonga), both experienced members of the team, he quickly discovers tensions running high between local gangs. When the trio finds themselves overrun during an arrest, a drone captures the encounter, threatening to expose the reality of everyday life. With MUBI GO, members receive one complimentary ticket every week to watch new releases, hand-picked by MUBI, at PVR Cinemas across India. Previous film selections have included PARASITE, LITTLE WOMEN, KAAMYAAB, THE INVISIBLE MAN, 1917 and more since launching in November 2019.
While MUBI members can find MUBI GO in their existing subscriptions, new members can subscribe now at an introductory price of Rs 199 for three months.
What to watch: LES MISÉRABLES
Where: PVR Cinemas via the MUBI GO app
When: Starting Friday, March 13, 2020
How: MUBI subscription
ABOUT MUBI: MUBI is a curated streaming service. An ever-changing collection of hand-picked films. From new directors to award-winners. From everywhere on earth. Beautiful, interesting, incredible movies — a new one, every single day. Always chosen by us. MUBI is available to watch in 190 countries, and the films we pick are guided by local cultures and cinema. We are the world’s biggest community of film-lovers, with over 9 million members around the globe. You can stream or download all our movies, anytime. On any screen or device, anywhere. And you’ll never see a single ad on MUBI. Ever. And with MUBI GO, our members also get a hand-picked cinema ticket, every single week, to see the best new films, in real cinemas. Subscription plans include an introductory price of INR 199 for the first 3 months, then INR 499 a month or INR 4,788 for 12 months thereafter. MUBI is available on the web, Amazon Fire TV, Hisense, LG, Sony and Samsung Smart TVs, as well as on mobile devices including iPad, iPhone and Android. MUBI has offices in London, New York, Kuala Lumpur, and Mumbai.