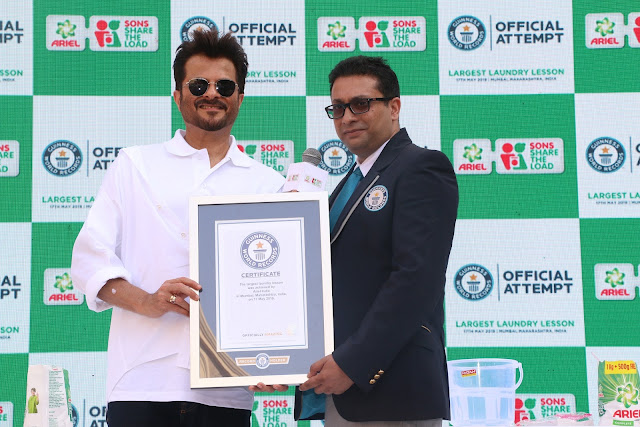 Mumbai, 17th May 2019: In a historic celebration of the culmination of their latest campaign Sons #ShareTheLoad, Ariel India attempted and achieved a Guinness World Records certificate by imparting the Largest laundry lesson to sons of today, so that they can grow up to be equal partners tomorrow. Joining the movement was leading Bollywood star, actor, husband and dad par excellence - Anil Kapoor who lead by example and encouraged the participants. Ariel launched the 3rd edition of their #ShareTheLoad movement earlier this year, urging the current generation to raise their sons like they have been raising their daughters, so that the next generation can lead more equal lives. Supporting that thought, celeb mom Mandira Bedi joined the Largest laundry lesson to impart the required skills to young men and pledged to raise her son with the values to #ShareTheLoad. For the record, 400 sons came forward to show solidarity towards the cause by learning how to do laundry, because with Ariel laundry is the simplest chore to start sharing the load with. 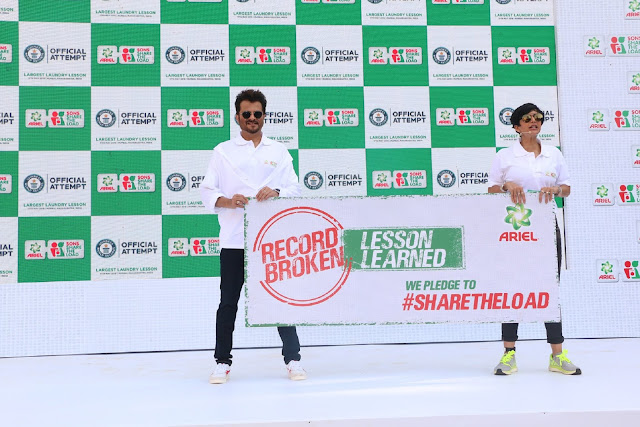 Ariel has been unearthing the reality of inequality within households since 2015, and with their 2019 campaign Sons #ShareTheLoad Ariel raised a pertinent question, “Are we teaching our sons what we are teaching our daughters.” Ariel believes that one of the prime factors for the existing household inequality is that the sons of today are not taught to, and not equipped to share the load at home. It is the sons of today who will become partners of tomorrow and it’s crucial that they are also taught household chores like laundry, cooking, etc. so that we are equipped to progress towards a more balanced and equal society. Ariel continues to have this conversation by making laundry the face of the movement against inequality within households. 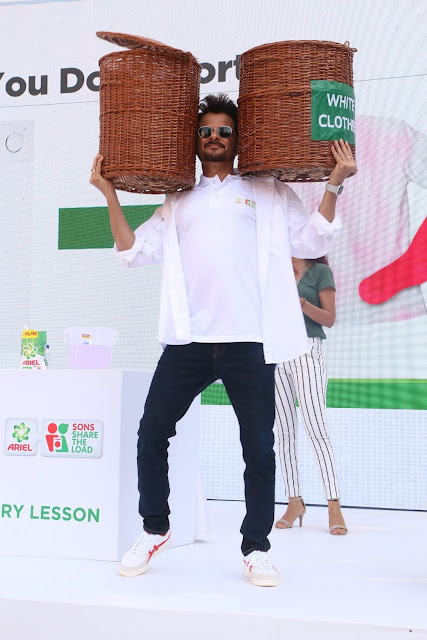 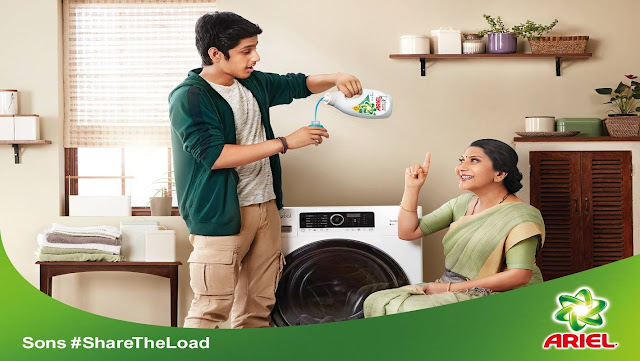 The third leg of the #ShareTheLoad campaign went all out to spread the message of domestic equality by roping in multiple partners. Ariel tied up with Navneet Prakashan to develop gender equal colouring books. Ariel conceptualised something as simple as SON-DAY whereby they appealed to the sons of India, to dedicate their Sundays to learn household chores and be capable to shoulder domestic responsibilities. The brand launched a rap song, to appeal to the young boys and talk to them with aids of their interest, on ‘why’ and ‘how’ to share the load and start with laundry! Ariel also tied up with highest reach commute touch point, auto rickshaws in Maharashtra to spread the message wide and deep, that when a boy learns at home, the society progresses as well! 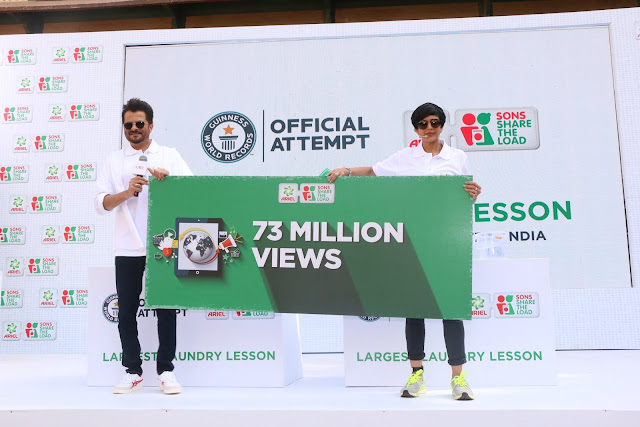 Focused initiatives driving a big vision, is what Ariel #ShareTheLoad is committed to. Ariel has seen a steady change in how men and women perceive household responsibility. In 2015, when we launched the campaign, we found that 79% men thought household chores are a woman’s job. In 2016, 63% married men thought household chores are a woman’s/daughter’s job while all ‘outside’ work is a man’s/son’s job. In 2018, this number has come down to 52%. More men today are sharing the load than ever before. However, we are still many steps further from the ideal state of an equal future. The newly released edition of #ShareTheLoad has resonated with many parents, newly married couples, influencers and has already received tremendous support and commendation from audiences across India. 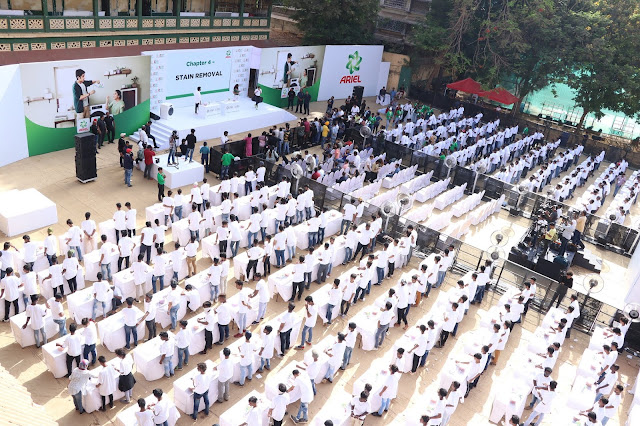 Excited on being a part of this global record and further encouraging the sons of today to Share the load, Anil Kapoor commented, “Children imbibe most of the values while they are young. I would like to thank my mom for raising us right, which is why when I married Sunita, supporting her came naturally to me. Together we’ve tried to inculcate the same values in our children as well, ensuring that irrespective of their gender, they are brought up as equipped to believe in, and demonstrate the values of sharing the load. I couldn’t be happier, that my daughter chose to marry someone who also believes in shared dreams and actions. Today, I’m glad that I am present to commemorate the GUINNESS WORLD RECORDS record of the Largest laundry lesson. This is a revolutionary step by Ariel, one that will further the cause of equality within households! Committing to #ShareTheLoad is important and will lead to happier homes across the country!” 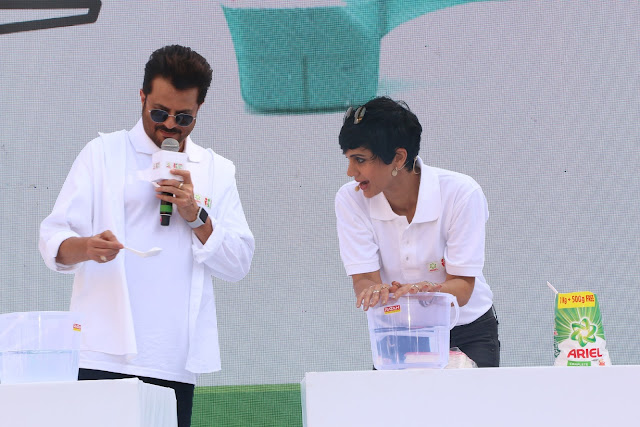 Mandira Bedi, who has been quite vocal in her support of gender equality at home, added, “As a mother of a young son, I can confidently say that the campaign and the cause will have resonated with a lot of young moms like myself. Learning to #ShareTheLoad between partners needs to be a way of life and hence needs to be taught at an impressionable age, so that it becomes a habit eventually. I am so glad that Ariel has undertaken this initiative to encourage gender parity, and so proud of the young men here today, who by participating in the Largest laundry lesson are setting a great example for the young sons of India!” 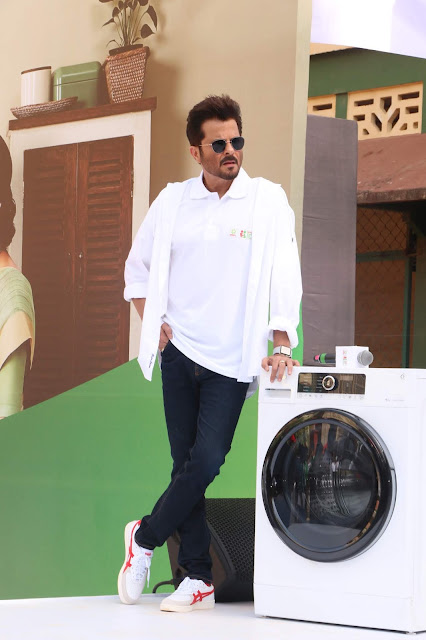 Sonali Dhawan, Marketing Director and Fabric Care Leader, P&G India, said, “#ShareTheLoad has always sought to address the inequality within the household, by raising questions that make the viewer think, introspect and act. With Sons #ShareTheLoad, we focussed on the younger generation, who if raised in a balanced manner, will grow up to be a generation of equals - the responsibility lies with our generation of parents. We want to equip the younger generation to be able to shoulder responsibilities and do it in a manner that is interesting and engaging for them. An attempt to achieve the GUINNESS WORLD RECORDS certificate for the Largest laundry lesson is yet another step towards creating a more equal tomorrow where the next generation exhibits household equality. Ariel will continue to be the face of the change because with Ariel, it’s so simple to do laundry that there’s no reason for anyone to not share the load!”

About #ShareTheLoad: Ariel #ShareTheLoad movement started in India to address the household inequality that exists in our society. In 2015, Ariel raised a very relevant question - ‘Is laundry only a woman’s job?’ to draw attention to the uneven distribution of domestic chores. With the 2016 ‘Dads Share The Load’ movement, the conversation was aimed at unearthing the reason for the disparity, which is the cycle of prejudice passed down from one generation to the next. The movement has had a significant impact over the years, with more men sharing the load than ever before. In 2015, 79%* men thought household chores are a women’s job. In 2016, 63%* men thought household chores are a woman’s / daughter’s job and ‘outside’ work is man’s / son’s job. In 2018, this number has reduced to 52%*. Despite progress, more work is still to be done. Towards this, #ShareTheLoad recently launched the third leg of the movement with Sons #ShareTheLoad because, with Ariel, laundry becomes the easiest chore to start sharing the load with!

About Procter & Gamble India: P&G serves consumers in India with one of the strongest portfolios of trusted, quality, leadership brands, including Vicks ®, Ariel®, Tide®, Whisper®, Olay®, Gillette®, AmbiPur®, Pampers®, Pantene®, Oral-B®, Head & Shoulders® and Old Spice®. P&G operates through 3 entities in India of which 2 are listed on NSE & BSE. The listed P&G entities are: ‘Procter & Gamble Hygiene & Health Care Limited’ and ‘Gillette India Limited’, whereas the unlisted entity (which is a 100% subsidiary of the parent company in the U.S) operates by the name ‘Procter & Gamble Home Products Ltd.’ Please visit http://www.pg-India.com for the latest news and in-depth information about P&G India and its brands.