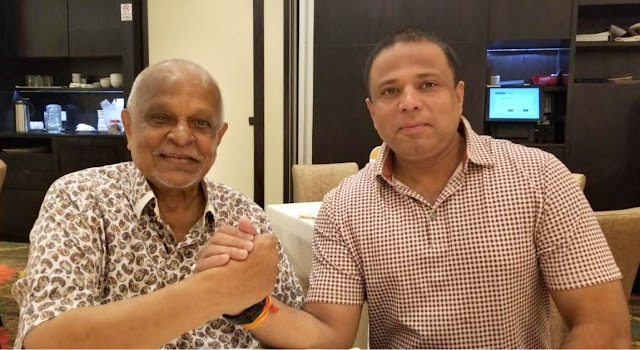 Mumbai, May 17, 2019: Chetan Pathare a leading name in the Indian fitness industry who has tirelessly worked for the betterment of Bodybuilding in India for more than 2 decades was announced as the new Gen Secretary of the World Body Building and Physique Sports Federation with immediate effect for a period of 4 years.
He is currently serving on the board of Indian Body Builders Federation (IBBF), in the capacity of General Secretary. He is also the Assistant Secretary of Asian Bodybuilding Federation (ABBF) and Secretary General of the South Asian Bodybuilding Federation (SABBF).  Mr Datuk Paul Chua (Singapore), has been appointed as the President of World Bodybuilding and Physique Sports Federation (WBPF). Mr Chetan Pathare will work alongside him and be in-charge of 19 member countries. WBPF is affiliated to TAFISA (the association for International Sport for all), World Leisure Organization, Pacific Games Federation and General Assembly of Asian Physique Sports Federation (GAAPSF).
Commenting on the development, Mr Chetan Pathare, General Secretary, Indian Body Builders Federation (IBBF) said, “It is a great privilege and responsibility to serve the global bodybuilding community as the Secretary-General of WBPF. The sport has been gathering momentum more than ever and I believe, it is a very exciting time to lead the organization. I’d like to thank the WBPF Board for giving me this opportunity and look forward to working with them, our members, the team and WBPF’s incredible partners and bodybuilders around the world, to propel the sport forward into a period of significant and sustained global growth in the coming years.”
Speaking on the appointment, Mr Premchand Degra, President, Indian Body Builders Federation (IBBF) said, “We, at IBBF are extremely delighted on this development. Mr Chetan Pathare’s contributions to IBBF, his credentials and proactive initiatives are well known to the entire Body building fraternity in India. We realize, the new role at WBPF comes with immense responsibilities to develop and promote our sport, across the globe. However, we are very confident that Mr Pathare’s contributions to the sport in his new role will continue to live up to the same high standards, he has set for himself and the Federation. There is no doubt that our sport and it's larger ecosystem stand to gain substantially from his guidance and unstinted enthusiasm.”
Chetan has been instrumental in spearheading the Bodybuilding movement in India conducting mega-events like 6th World Bodybuilding and Physique Sports Championship, Mr India National Champion Ship and Asian Championship etc. Chetan Pathare and Datuk Paul Chua are determined to steward the WBPF to the highest level with their combined knowledge and passion for the sport of Body Building and Physique Sports.