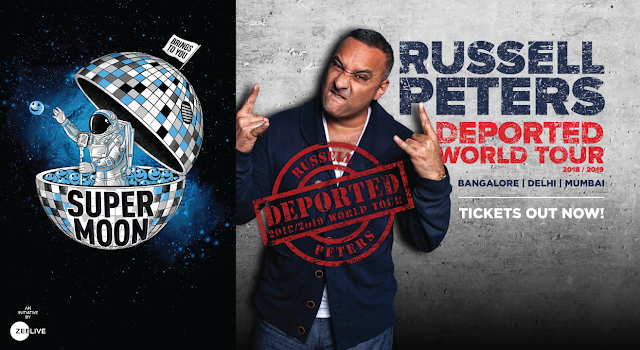 Peters will perform at Supermoon, a platform launched by ZEE LIVE to bring leading international entertainment acts to India

Mumbai, 22nd May 2019: Global comedy superstar Russell Peters will be performing in India as part of his brand-new Deported World Tour. Peters’ new show will feature all new material including plenty of Russell’s signature audience interactions.

Peters will perform in India at Supermoon, a platform launched by ZEE LIVE which promises to bring leading international entertainment acts from comedy, music, theatre and many more, to India. In its very first edition, Peters’ will perform in Mumbai on June 2 & 3rd 2019 at NSCI Dome. Listed on Forbes as one of the top ten Highest Earning Comics in the U.S. since 2009, Peters has spent the last 29 years building a career to become one of the biggest comics in the world. Thanks to YouTube and his global following, Peters has sold-out arenas from Madison Square Garden to the Sydney Opera House. Peters has also performed for the troops in Afghanistan, Iraq and on the USS Eisenhower and the HMCS Winnipeg, and appeared on The Tonight Show with Jay Leno, Lopez Tonight, Jimmy Kimmel Live, The Late Late Show with Craig Ferguson and on HBO, CNN, MTV, BBC, Showtime and Comedy Central. Peters 2010 memoir, Call Me Russell, was a Globe and Mail number one bestseller in Canada.
Details of the event below:
Date: 2nd & 3rd June 2019
Time: 6:30 p.m.
Venue: NSCI Dome, Mumbai
Tickets available at: https://insider.in and https://paytm.com

About Supermoon: Supermoon is an Intellectual Platform of ZEE LIVE, a division of ZEE Entertainment Enterprises Limited (ZEEL). The platform was curated with an objective of bringing the leading international entertainment acts from comedy, music, theatre, etc. to India. Supermoon is a phenomenon which aims to give Indian audiences an experience which is enriching and fulfilling to the soul.