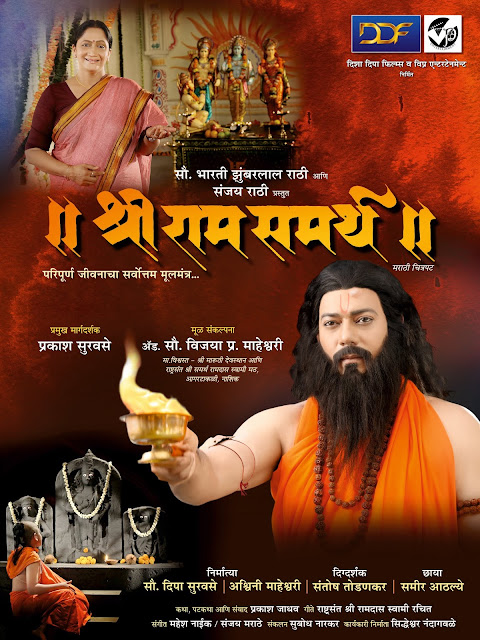 The 12 year old liitle Narayan who explains the meaning between the lines “shubha lagna ‘saavdhaan’” to the sage who acquired the Siddhi by his sheer knowledge and the deep devotion of Lord Rama, are two distinctive features of Samartha Ramdas Swami’s life. Film also shows that he was the true proponent of women’s empowerment and dignity. He imbibed in the society, the concept that ‘a clean environment fosters an enriched community’ four hundred years ago, and yet it is still relevant. He also has always provided thoughtful guidance to the community whenever it has strayed from the noble path. This film bears a unique glint due to superb and lively acting done by distinguished actors. This film, beyond being just a biopic of Ramdas Swami, is a witty commentary on contemporary status of our society.
The historical incidences depicted in the film speak clearly about good governance and leadership. The film ‘Shri Ram Samartha’ with Santosh Todankar’s direction, is presented by Bharati Jhumbarlal Rathi and Sanjay Rathi. Story, script and dialogues are by Prakash Jadhav, Manoj Yerunkar and Vitthal Ambure. Photography is by Sameer Athlye, editing by Subodh Narkar, art by Mahendra Raut and music by Mahesh Naik & Sanjay Marathe. The audience will be soon greeted by the film ‘Shri Ram Samartha’ which underlines the basic principles required to lead a fulfilling life. This film should definitely prove entertaining, enlightening and encouraging to the thinking audience. After the ceremony, the audience expressed that they are eagerly waiting for this film and they wished for an early release.