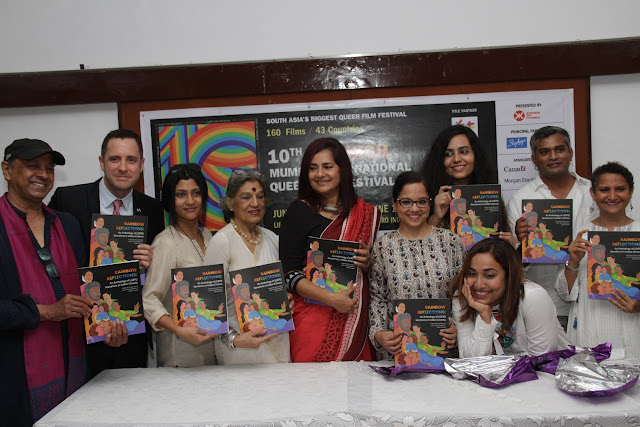 160 films from 43 countries to be screened at South Asia’s biggest LGBTQ film festival, including ‘A Monsoon Date’ starring Konkona Sen Sharma; Neeraj Ghaywan and Kitu Gidwani will be part of the festival jury
KASHISH Mumbai International Queer Film Festival – South Asia’s Biggest and India’s only mainstream lesbian, gay, bisexual and transgender film fest –  is back for its 10th edition. The festival will be held from June 12-16, 2019 at two iconic venues in South Mumbai – Liberty Carnival Cinema and Metro Inox. Founded in 2010, KASHISH was voted as one of the Top 5 LGBT Film Festival in the World and was the first Indian LGBT festival to be held with approval by the Information& Broadcasting Ministry, Government of India. The festival theme this year is ‘Over the Rainbow’.

A special magazine ‘Rainbow Reflections: An Anthology of LGBTQ Narratives In Indian Cinema’ , with support from the Quebec Government Office in Mumbai, was released on the occasion. “KASHISH this year features the best of LGBTQ films from around the world – 160 films from 43 countries. They have been chosen from over 700 film submissions. We try to bring a diverse spectrum of LGBTQ films to be shown on the big screen in Mumbai and the festival ensures a fair representation of not only gender & sexuality, but also popular and edgy films,” says Festival Director, Sridhar Rangayan. 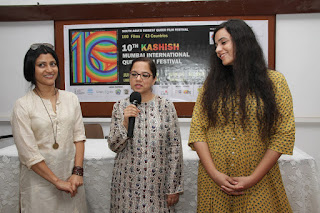 I'm so excited that I am coming to KASHISH with the film ‘A Monsoon Date’ directed by Tanuja Chandra. This is the first time I am playing a trans-character, but this definitely is not the last. I am thrilled and proud and honoured to be here. I think when we exclude LGBT from the society, from our films, we tell an incomplete story of the world. That's why spaces like this are important … to share lives and experiences of a collective humanity. Earlier women were missing from this conversation and now I feel LGBT are so far from the mainstream narrative. I'm so glad that the LGBT Family will be part of the larger narrative. I hope the film and KASHISH will spread love and spread pride,” said actor Konkona Sen Sharma. “KASHISH is the most important LGBTQI festival in India. It fosters a culture of cinema and conversations around the community. I am thrilled to be a part of the jury for the narrative section of the festival. In its 10th year, and post 377 being struck down, it is a great time for KASHISH and I wish them the very best,” said filmmaker Neeraj Ghaywan, who is part of the Narrative films jury. “I am so happy to be on the jury of KASHISH this year. Cinema is my absolute passion. And at KASHISH I am watching films on love, loss, belonging, desire, betrayal, tragedy and comedy. Human stories, in short! LGBTQI people are human- just like everyone else. KASHISH shows us this with great honesty and élan; and also heartbreakingly shows us the very poignant and particular problems faced by the LGBTQI community in today's world,” said actor Kitu Gidwani, who is also part of the Narrative films jury.

“This year KASHISH is celebrating its 10th anniversary, and we congratulate it on that achievement! After all, to achieve a long-lasting event, it not only takes hard work, investment, time and energy, but also passion and conviction. As a festival partner, the Québec Government Office in Mumbai is also an ally in defending the rights of the LGBTQ community in India. That is why we are thrilled about the recent decriminalization of homosexuality, which not only helps advance the cause of sexual and gender minorities here in India, but also around the world”, said Dominic Marcotte, Consul & Director of the Québec Government Office in Mumbai.

Key Highlights for this year will be:

The festival is spread across two venues in South Mumbai this year
Liberty Carnival Cinemas and Metro Inox.

The festival theme is “Over The Rainbow”

Around 50 films will compete for top awards at the festival in eight categories.

The festival will hand out cash prizes of Rs 3.95 lakhs.

A Rs 2 lakh QDirshti Film Grant sponsored by Lotus Visual will be awarded to support an independent filmmaker based in India to make his/her next LGBTQ-themed film. 6 films are nominated.

GagaOOLala is sponsoring the Best International Narrative Short Award with a cash prize of Rs.20,000.

The Best Screenplay Award will make its debut with a cash prize of Rs 15,000  instituted in the memory of renowned poet and author late Dr. Arvind Waman Kulkarni.

The Closing film is the acclaimed Malayalam film Njan Marykutty (I Am Marykutty).

The Best Indian queer short film at KASHISH gets to compete for the Iris Prize in UK which carries a cash prize of 25,000.

Several companies have come together again to support KASHISH including Keshav Suri Foundation, Skybags, Godrej, Morgan Stanley and The Lalit group of hotels.

KASHISH also offers scholarships to 8 Indian filmmakers to attend the festival and present their films.

KASHISH 2019 will present an interactive sessions with Sweekar – The Rainbow Parents, support group for parents of LGBTQ children.

KASHISH 2019 Theme
KASHISH 2019 festival theme ‘Over The Rainbow’ not only commemorates the reading down of Sec 377 and decriminalization of same-sex relationships in India, but also defines the challenges in store for the LGBTQ community’s journey towards empowerment and social acceptance. Bringing together films from all over the world as well as panel discussions and performances, the festival will showcase the shared struggles and victories, and offer a window to existing and future possibilities. Let’s together journey over the rainbow to discover the land of equality & dignity.