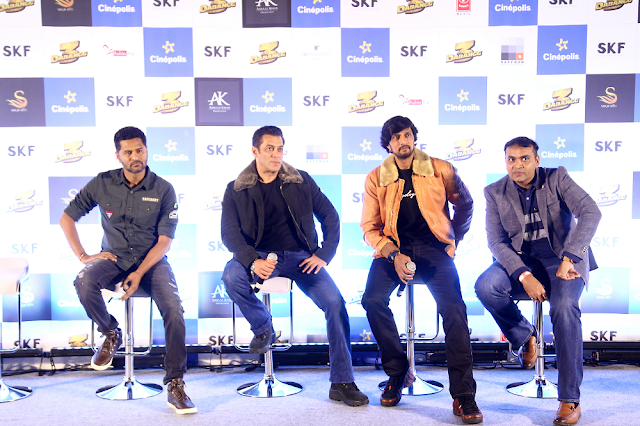 Cinépolis completes ten glorious years of its India journey
The occasion was celebrated with superstars Salman Khan & Sudeep at Cinépolis ETA Mall, Bangalore
by Shrutee K/DNS
New Delhi, 18th December 2019: Cinépolis, India’s 1st international and the world’s 2nd largest movie theatre circuit, is celebrating its 10-year anniversary in India. Bollywood’s favorite actor and Superstar Salman Khan celebrated this momentous occasion with team Cinepolis at Cinepolis ETA Mall Bengaluru, while promoting his upcoming movie, Dabanng 3.
As part of the celebration, Cinépolis theatres across the country also opened their popcorn machines to fill tubs with unlimited popcorn for patrons who visit them and purchase a jumbo combo on 18th December 2019. This offer is valid across all Cinépolis theatres in India for all shows and movies.
Cinépolis completes ten years of its India journey today, since the first multiplex of this popular Mexican cinema chain was opened in Amritsar in 2009. In 1999, it was also world’s first cinema exhibitor to pioneer the concept of luxury movie theatres, establishing the first luxury theatre experience in Mexico City. The focus has remained the same, that is providing the audience with a new format of movie-watching- complemented with an international appeal.
Speaking on the occasion, Javier Sotomayor, Managing Director, Cinépolis Middle East and Asia said, “We are excited to celebrate 10 strong and successful years of Cinépolis in India, a decade of celebrating cinema. It has been a fascinating journey for us with both challenges and opportunities. India continues to be an important market for us, and over the coming few years, we will increase our cinema count pan-India, providing the experience of world class cinemas to more Indian audiences.”
Devang Sampat, Deputy CEO, Cinépolis India shared, "It is a moment of great pride for us as we complete the tenth year of kick-starting the culture of technological formats of movie-watching in India, from RealD 3D to 4DX. From the first screen in Amritsar in 2009 to 386 screens pan-India today, the journey has been a tough yet fulfilling one. We would like to express our heartiest gratitude to all the Cinepolites who have made it possible to turn this venture into a reality.”
Celebrated actor Salman Khan, who was present at the celebration event said, “I am proud to be associated with the anniversary celebrations of this reputed cinema chain. Being an actor, I realize the role of a multiplex in the success story of our movies. My character, Chulbul Pandey co-incidentally is going to complete ten years next year; therefore, it’s an emotional moment for me as well. I would like to congratulate the entire Cinepolis team on achieving this glorious feat and inviting me to be part of this special occasion.”
About Cinépolis India: Cinépolis India is a wholly owned subsidiary of Cinépolis and is the 1st international exhibitor in India. The company currently operates 386 screens under the brand names of Cinépolis, Cinépolis VIP, and Fun Cinemas. Cinépolis operates India’s biggest Megaplex – 15 Screen Multiplex in Pune and has brought innovative concepts to exhibition Industry in India. Cinépolis also offers multi-benefit loyalty program- ‘Club Cinépolis’, to enhance customer experience and increase loyalty. Club Cinépolis offers free registration, earning and burning of points, invite to pre-screening of movies and star visits. Cinépolis India has been awarded with “Most Admired Retail Launch” in 2010, “Most Admired Retailer – Innovation” in 2011, “Fastest Growing Multiplex Chain” in 2015, “IMAGES Most Admired Retailer – Entertainment” in 2015, “DLP CineAsia Marketing Achievement Award” in 2015, ‘Best Marketing Campaign of the Year’ award at the Making of Developed India awards 2017.  In 2018 Cinépolis has been awarded with ‘Best Multiplex – West’, ‘Best Multiplex – South’ and ‘Fastest Growing Chain’ at the Global awards for Retail Excellence. In 2018, Cinépolis India has been awarded with “Most Trusted Brand of the Year” at Big Cine Expo 2018 and Images Most Admired Retailer – Entertainment at Indian Retail Forum 2018. In 2019, Cinépolis India was awarded the ‘Most Admired Omnichannel Retailer of the Year’ at the MAPIC India Retail Tech Awards.
About Cinépolis: Cinépolis was founded in Mexico in the city of Morelia, Michoacán in 1971. Today it has positioned itself as the world’s 2nd largest movie theater circuit in attendance, operating 884 cinema complexes, 6593 screens and over 1.2M seats across 18 countries worldwide. It was the first cinema exhibitor in the world to pioneer the concept of luxury movie theatres, establishing the first luxury theatre experience in 1999 in Mexico City. Cinépolis aspires to provide its guests with the best overall experience in film entertainment and employs a global workforce of more than 39,370 people to support its mission. Cinépolis plans to continue to revolutionize the industry for years to come.