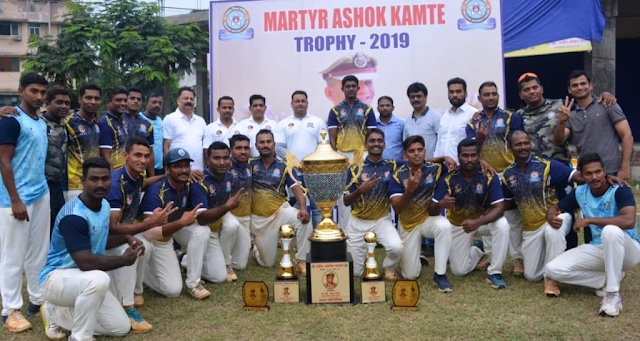 by Shrutee K/DNS
Mumbai: Greater Mumbai Police produced a strong all-round performance and registered a convincing 8-wicket win against Pune Police in the final of the Inter-District cricket tournament 2019 for the Martyr Ashok Kamte Memorial Trophy, organized by Superintendent of Police, Palghar and played at the Shivpark Cricket Ground, Nalasopara. The Mumbai Police has successfully retained their title.
Batting first Pune Police were dismissed for 136 runs in 19.5 overs. Middle order batsmen Pruthviraj Gaikwad (22 runs) and Amar Salve (19 runs) lifted the Pune Police innings. Mumbai Police medium pacers Amit Jadhav (3 for 14) and Yogesh Patil (2 for 8) were responsible for restricting the opponents to a small total.
In reply, Mumbai Police opening batsmen Sudhakar Siddul (53 runs) and Sunil Patil (35 runs) ensured they reached the winning target scoring 139 runs for the loss of just two wickets in 16.2 overs. Shrikant Limbole (28 runs) and Rohit Pol (20 runs) completed the finishing touches. Gaikwad (1 for 40) and Ankush Dighe (1 for 20) got the wickets.


There was reason for celebration for the Mumbai Police team as they bagged all the three individual awards. Rohit Pol was declared as the ‘Man of the Tournament’ the ‘Best bowler of the tournament’ award was claimed by Kailas Kolekar and the ‘Man of the final’ prize went to Sudhakar Siddul.